Bullying can be very difficult to handle especially if there is no physical violence involved.
aaa

The National Center for Education Statistics reported that in 2009 twenty-nine percent of all American students’ ages 12 to 18 were bullied in school.

The Council of Arab and Islamic Relations also reported in their bullying report that approximately 350,000 school children are bullied every week and more than 150,000 students skip school every day out of fear of being bullied or harassed.

An article in the February 25, 2013 issue of the FrontPage Magazine by Daniel Greenfield, tells the sad tale of a nine year old white British boy named Aaron Dugmore who hung himself because of racist taunts from Asian Muslim students.  The student’s mother is convinced the taunts led to her son killing himself.

Aaron told his family that he was threatened with a plastic knife by one Asian pupil — who warned him: “Next time it will be a real one.” Unfortunately, despite complaints to the school, the parents of the students claim that nothing was done to stop the bullying.

The New York Daily News also reported on October 11, 2010 an article about an American born Muslim student named Kristian whose life was made a living hell by four bullies who called him names and beat him whenever they could in his Staten Island public school. His parents report that he is now afraid to go outside alone.

Kristian suffered nine months of abuse from classmates who punched him, spit in his face, tripped him on the floor, kicked and punched him in the groin while laughing and saying repeatedly Muslim and terrorist.

Bullying can be very difficult to handle especially if there is no physical violence involved.  In many cases, the bullying is verbal such as taunts, name calling, threats, or harassment. Some teachers may tell the student to ignore it or say words don’t hurt just ignore them.

Unfortunately, words can hurt sometimes even more than physical striking as the emotional and mental scars that the person carries may not be recognized by those around them.  This is unlike a physical scar which people tend to address, so unless the bullying turns violent, in many cases it is hard to stop and address.

Since 9/11, American Muslims have had to endure increased bullying in the workplace and in the school setting.  The 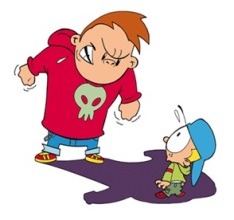 bullying tends to increase whenever there is a new terrorist attack perpetrated by a Muslim around the world.

With the recent Boston Marathon bombings, we are seeing an increase in Muslims being targeted for attack.

While bullying is a part of many a student’s rites of passage it really shouldn’t have to be, and this phenomenon is not restricted to Muslim students.

I tell my own children that bullies just look for your weak spot and pick on you for whatever they can find. If not, then they pick on you because you are different, be it prettier, uglier, popular, unpopular, smarter, etc. They just want to feel strong and important and believe that by victimizing someone else this increases their self-worth.

Unfortunately, Muslims can be victims or victimizers and in some cases they are the ones taunting other students. My children experienced more bullying at the local Qur’an school than they did at their public non-Muslim school.

My daughter was bullied by Muslim students from Africa who basically threw rocks at her, jumped on her, called her names, sat on her, amongst other things.  And this all occurred at the masjid during the break time they give the students.

My position was that it takes a village to raise a child and sometimes the parents have to step in and let the children know that they will not tolerate bad behavior.

Since the masjid administration was unable to control the children, I took it upon myself to talk to the girl and let her know in clear terms that she would not be bothering my daughter again and I was not going to run to the imam to settle disagreements.  I was going to deal with the issue myself.  After that discussion she did not bother my daughter again.

Of course, the girl’s mother was upset, but I felt that she had terrorized too many children already and was making Qur’an school an unpleasant experience for those around her so I had to stand my ground as my daughter was too scared to.

Muslims need to recognize that Muslims have rights over one another. They need to read Surah Hujurat and the verses about making a mockery of someone and calling each other by bad nicknames, and harming their Muslim brother with their hands or their mouth.

Muslims need to recognize that it is their duty as Muslims to give da`wa and the best da `wa is their actions. If Muslims sit around in school calling student’s names, and hitting and taunting students, they are setting a bad example that no one will want to follow. We want people to look at Muslims and think the Muslims are kind, they enjoin the good and forbid the evil and are at the forefront of good behavior.  They should not be the ones in the principal’s office always fighting and terrorizing other students.

Federal civil rights laws in America require that schools address bullying that is severe, pervasive or persistent that creates a hostile environment which interferes with the student’s ability to take part in services offered by the school.

The bullying should be based on a student’s race, color, national origin, sex, disability or religion to be protected by Federal civil rights legislation.

The school should communicate with students to make sure that the bullying has ended after the incident was reported. The school should also put in place measures to prevent retaliation against students who report bullying.

Parents should remain vigilant and talk with their children about what goes on in school and let them know that you are on their side.  In some cases, it may help if the student ‘stands their ground’ and stands up to the bully.  This is usually effective if there is documented evidence that the student reported the incident to teachers and principals and the situation is still taking place.

Stand your ground entails standing up to the bully and letting them know that you will not tolerate this behavior. If you run away and cower then this normally emboldens the bully as they know you are scared. Sometimes when you stand up for yourself, the bully will back down once they know that you are not afraid and will defend yourself when attacked then they may move on to a weaker victim.

The best solution is to make sure you report any incidences of bullying to your child’s teacher first, then the principal, and if nothing is done contact the superintendent or even the police if the bullying consists of physical violence. If you have to escalate it, then do so but make sure that your child is protected.

If nothing is resolved then there are agencies that will help ensure that your rights are being met. CAIR has legal representatives who have experience ensuring that the rights of Muslims are being met, so they are an excellent resource to contact for assistance. They have a websitewww.CAIR.com with information listed on how to reach them if you need assistance.

The bottom line is that it is up to us as a community to ‘stand our ground’ and let the bullies know that we will not take it anymore whether they are Muslim or non-Muslim.

We will rise up as a community and make sure that our children are not bullying other people and that they are not being bullied.