Wearing the hijab in the USA, far away from being in a Muslim ummah where it is the norm, can have some Muslimahs feeling like the odd one out. People stare, many have facial expressions that convey more than words can say and some don’t keep their disdain to themselves.

Huda Fahmy, a hijab wearing woman in the USA, has been the brunt of a joke and endured endless curious questions from people. Fahmy has uniquely and masterfully turned her bad experiences to her advantage by telling the truth about these real-life situations. And she does so with humor! The hilarity is captured in the form of a comic book called Yes! I am Hot in This: The Hilarious Truth about Life in a Hijab! 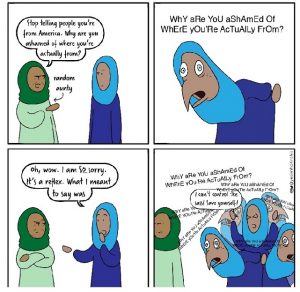 Fahmy tells About Islam what sparked her comic-making idea

Fahmy describes herself as a “first generation American, born in Detroit, USA to parents of Arab descent in a family of eight brothers and sisters.” She was an English teacher to middle and high school students for about eight years, until her son was born, at which point she became a full time mom. It was then that she started a blog, which took a slightly different direction after Donald Trump was elected as president.

Fahmy explains, “After the election, there was so much media attention given to people who very clearly hated Muslims. It was a scary time, and I was sick of the constant fear. I wanted people to know what it was like for an American-Muslim hijabi living in America, so, I started writing a collection of essays about the funny and not-so-funny experiences I’d had.”

If we don’t pick up that mic and tell our stories, someone else will. -Huda Fahmy

Fahmy shared her ideas with her older sister for feedback. Her sister suggested Fahmy take her essays and turn them into a comic book. Not being an artist, Fahmy set out to develop and draw her Muslim hijabi character. Through self determination and focus she finally created the main character, aptly named “Huda”.

The comic also features Gehad, Fahmy’s real-life husband, as the male character. In reality, Huda affectionately refers to Gehad as “the most supportive person” in her life who encourages her to dream bigger. He handles the business side of her Instagram account and filters through the responses from the public which can be both sweet and bitter from Muslims and non-Muslims alike.

And how is the Huda comic received?

As nice as it is to get favorable comments, unfortunately it’s the bitter ones that impact hardest. It’s times like this that Fahmy finds comfort in the pages of the Quran. She says, “The Quran is definitely a major source of relief for me, but I took a lot of solace from the life of the Prophet (peace and blessing be upon him). Whenever I receive hate mail or bitter comments, I always look back to the experience the Prophet (pbuh) had when he was driven out of Ta’if. Though he was severely beaten, he still had hope for those who hated him. And so do I.” 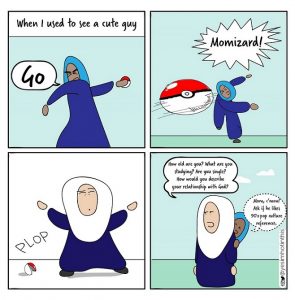 Gehad is not the only other real-life character in the comic book, her parents are also featured. As supporters of her endeavor, their characters bring a relatable parent-child relationship with a twist of added humor. Fahmy says, “My mother is a huge influence on my work. She and my father taught us to be strong and independent women. I ask her to read some of my comics ahead of time (especially if they include her). Sometimes she’ll laugh and sometimes she’ll tell me she doesn’t get it. She keeps me grounded.”

Getting published is no small feat. Fahmy’s story is unique here as well, “A fellow author and friend, actually recommended me to her publisher who then contacted me. We worked it all out and the rest is history!” Yes! I’m Hot in This: The Hilarious Truth about Life in a Hijab! was just released in hardcover in December 2018. On finally holding a copy of her comic book Fahmy says, “I was so overwhelmed with happiness. It felt unreal. I was speechless.” Her ensuing success has been whirlwind.

In a short space of time, her story has been told by numerous media outlets, such as The Huffington Post, The Pakistan Journal, The Muslim Vibe, The Houston Chronicle, Ummah Sonic, and she even has her own author’s page at Simon and Schuster  – her publisher’s site. For the future, Fahmy says, “I hope to put out another comic book as well a children’s book! I have a few ideas in mind but I’m still working out the wrinkles.” 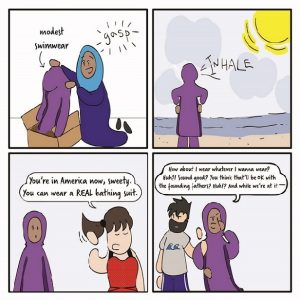 Thank you Huda for your time. About Islam loves your comic and we look forward to seeing your debut book have continued success around the world.

Click here to read a review of Yes! I’m Hot in This: The Hilarious Truth about Life in a Hijab! by Huda Fahmy.