Why have Muslims – be they conservative or liberal - become a target, when most of us simply want to live our lives like anyone else?
aaa

One of the most virulent examples of hate speech empowered by a skewed perception of freedom of expression, Katie Hopkins, wrote an article in 2015 in the tabloid Daily Mail newspaper, falsely accusing a Muslim family who went on vacation to Disneyland in America, of being ‘extremists.’ They were fined £150,000.

Events of recent days have shown the murder of a Russian diplomat, a truck driving through a Christmas market in Germany, and an attack in a mosque in Switzerland. How the media responded to all three incidents speaks volumes about the modern day bogeyman, the Muslim. Guilt by indirect association, sharing elements of a common faith seem to be sufficient to charge all Muslims with the crimes committed by the foolish, almost always ignorant terrorist.

Consider the murder of Ambassador Karlov by a Turkish police officer. In his post murder rant he spoke, ‘We are the ones who pledged allegiance to Muhammad.’ Yet, if he actually knew Prophet Muhammad, he would have known that prophet Muhammad forbade the murder of diplomats E.g. When Musaylimah also claimed to be a prophet and started murdering Muslims, he sent two ambassadors, Ibn Aathaal and Ibn al-Nawaaha. Despite being in a war with Musaylimah, the Prophet forbade any harm comes to them as they are ambassadors.

In an age of instant-everything, the response to the Berlin Christmas market truck attack was initially linked to a Pakistani refugee. This opened a tirade of abuse across social media against refugees, even with President-elect Trump weighing in.  As it turns out, not only did the accused deny it, but the German police were unable to find any forensic evidence connecting him to the truck, so they are actively pursuing other leads.

The eagerness with which people are seeking fault, wanting to cast blame, either as a means to validate their own insecurities by leveraging their failures onto others, or simply as an outlet for their repressed hatred of the other, is truly disturbing. This is demonstrated by the attack on the mosque in Switzerland.

In the immediate aftermath, some on social media hashtagged #Berlin #Ankara #Zurich blaming immigrants and Muslims for these attacks, failing to realize that the attack at the Islamic Center was actually targeting Muslims.

The UK based initiative Tell MAMA which documents anti-Muslim abuse notes that in a survey, almost 46% believe that British Muslims do not share ‘British Values’ – whatever these are and however they are defined. I say this as even the British Citizenship Test was criticized by Dr Thorn Brooks of Durham University saying that it focuses too much on history and not enough on practical knowledge. He said, ‘The new citizenship test is unfit for purpose.’

In recent days, the BBC 2 program #MuslimsLikeUs is a perfect reflection of how the image and identity of Muslims in Western media is presented in a negative manner. Clearly designed for popular TV In a Big Brother style, the show included two agitators, one obvious, the other less so, around whom much of the final cut was presented. Speaking about the show, one of the housemates, Naila Darr said,

“The reason I decided to do the documentary was because I was told the program was about diversity, showing how normal Muslims were, and how when people say that Muslims are like this, and Muslims are like that… And another reason, on a personal level, I felt that the media never shows independent, feisty, resourceful (Muslim) women, who are living life on their own terms, with or without a man, and had opinions, and I wanted to give voice to that.

I was really disappointed with the end result. After 10 days of footage which I can’t discuss as I’m under contract not to discuss.. But I can tell you that very wide subjects were covered… Interviews upon interviews were taken by all the ten people on the show. And in the end, it became the Abdul Haqq show with Nabil talking about race, so it became about radicalization, it became about fundamentalism, and Mehreen was focused on placating Abdul Haqq. So they became the three main players. That’s what the show became about. And the seven people behind the scenes, we were just pawns to them. Everything that we discussed and covered, did not get shown. 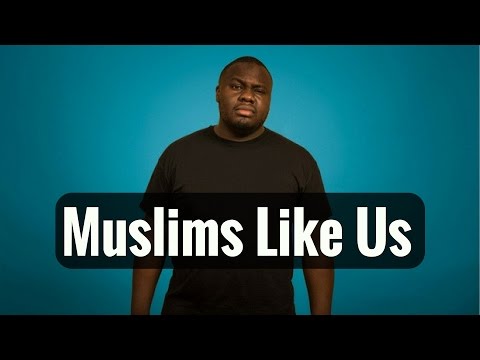 Nabil, one of the characters presented in the show.

I feel the seven people that were not shown were not fairly represented. They were not only unfairly represented, but there was a complete distortion of how they were represented. For example Baraa, he runs a charity where 100% of the money goes to children living in refugee camps in Syria. It goes to help educate them, towards hospitals…etc. The only representation that he got was that he naively wanted to hug an EDL (English Defence League, a racist group) supporter.

Mani has a career in media already. He is an entertainer, he’s a musician, he’s a singer, he’s a host to the top events that take place. None of that was shown. But what was shown, which is the distortion that I really object to, he was shown as a mummy’s boy, and possibly a closet gay. As all they showed was him hugging Ferhan.

Saba, 76 year old woman, 50 years she’s been a Muslim. She has so many stories to tell, so much to teach. But what was shown, was just her getting angry and annoyed. The race, the fundamentalism, she was objecting to that being the only narrative by Abdul Haqq and Nabil. And every time she stood up to that, she kept asking for some space, for other people to share for other people to give their opinions. But these two guys dominated, dominated, dominated, and that’s what they made the show about.”

Why have Muslims – be they conservative or liberal – become a target, when most of us simply want to live our lives like anyone else? We do not cast blame on all Buddhists based on the bad behaviors of those in Burma persecuting the Rohingya? Stereotypes help no-one.

The disturbing reality is that it is the lazy mind. When hardship – particularly economic – face some of us, they become sad, upset, they look for an easy target to blame. The only way to overcome this bias and change the status quo is to stand up for fairness, for everyone; this includes economic opportunities for all. It is only then, together, as one community of human beings, that we can ensure that no group of people, irrespective of their beliefs, would be marginalized again.

Prophet Muhammad understood this in Mecca and Medina, bringing the tribes and religions together. The sooner we as Muslims focus not on what is different but what we have in common; the sooner Muslims give up the belief that they are the saved group and focus instead of being positive contributors to society (remember, even Prophet Muhammad doubted what would come of him in the next life); then the sooner no group will be made a target and we can find better ways to live together in peace.