The sea of people walking to stone the jamaraat is unlike anything I have ever seen. Hajjis walk for miles on end just to perform this ritual of the Hajj and its symbolism is something worth reflecting over. We gather stones in muzdalifa and carry them in our pockets/bags and head towards the giant pillars representing the devil our vices, or , inhibitions and weaknesses.

Upon my return to Mina, I immediately cut my hair & took the best shower of my life. I came out feeling refreshed. Feeling like a new creation. I napped and enjoyed the rest of my Eid day in the company of Allah’s honored guests.

Al-Baik is Saudi Arabia’s version of KFC on steroids. People in Saudi go crazy for Al-Baik chicken and are willing to stand in lines that wrap around the restaurant just to sink their teeth into that deep fried chicken leg. My unsolicited advice is if you are ever in Saudi that you try the Spicy Chicken nuggets or chicken breast and dip it in the garlic sauce, some ketchup and sandwich it all between the sesame seed bun and wash it down with an ice cold soda drink – Miranda lime is my go to. I don’t advocate for fast food and sugar filled carbonated drinks but when in Rome, do as the Romans is all I’m saying.

A group of Hajji’s and I decided that we would gather some money together and purchase Al-Baik meals and distribute them to the pilgrims who were sleeping on the street and enduring Hajj in less comfortable positions than ourselves. Alhamdulillah with the money we collected we were able to purchase and distribute over 6 thousand Al-Baik meals and distribute them to the Hajjis in Mina. Giving aide and relief to someone is rewarding. That is even more rewarding is giving aide to a Hajji who is an honored guest of the Almighty and praying that in giving them relief, that Allah will give you relief.

There are many sisters who come to Hajj and feel like their menses are a burden to them while on their pilgrimages. I reminded them that even the mothers of the believers Aisha (RA) was on her menses during the hajj and endured this hardship so we have her as an example of how to proceed if we are indeed in the same situation.

We have to remember that Hajj is equivalent to jihad for the woman. Allah in His infinite mercy has granted us equal reward in our Hajj as if we were fighting for His sake in jihad. Sure, Hajj comes with its bumps in the road, but staying steadfast and accepting Allah’s decree for us is part of the test.

In the time of the Prophet (PBUH) women who traveled to Hajj with their families had the luxury of staying in Makkah for months at a time. Women had the opportunity to complete their menses, complete their hajj and return home with no fear of returning with an incomplete pilgrimage. Today, our means of transport are much quicker and we are only allotted a certain window of time to embark on the hajj due to visa restrictions.

So, because of this contemporary Fiqh issue, scholars have passed a fatwa for female-pilgrims who are on their menses and will not complete their periods before their journeys back home. Women who are on their menses are allowed to combine their intentions for tawaf al ifadha and tawaf al wada’ and can complete their 7 circumambulations around the Kaaba before their departure to their home countries in order to avoid staying in major ihram.

As I walked around the Kaaba and completed my circumambulations with my new friends, I couldn’t help but feel emotional as I bid farewell to Allah’s house. The cocktail of emotions is hard to put into words – gratitude, humility, thanks, heartbreak. I didn’t want to leave but knew that my hajj was complete and all I could do was pray and ask Allah to accept my acts of worship and invite me back to His house again and again and again. 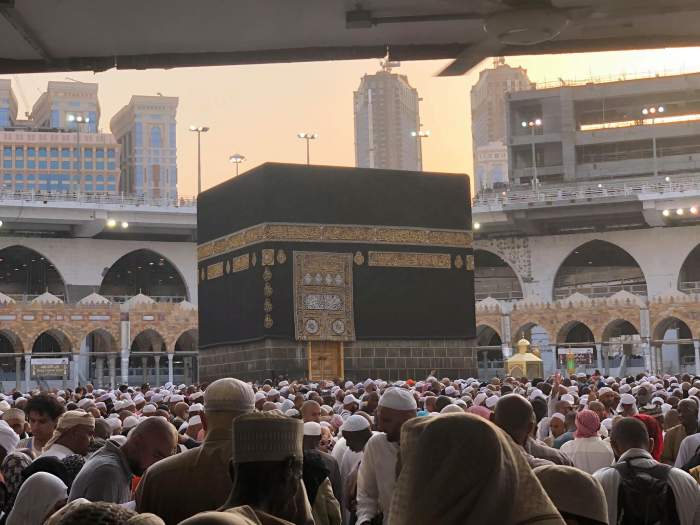 I pray for all of you reading this. If you have never been to Hajj or Umrah, I ask that Allah (azawajal) grant you the honor of being His invited guest. I pray that you feel the comfort of being in the haramain, that you are able to immerse yourself in the worship of your creator in the most sacred place on earth.

I pray that you are given the opportunity to worship alongside your brothers and sisters from every corner of the earth and that you feel the community, brother/sisterhood and love that is felt only when being amongst the Muslim Ummah.

May Allah accept the Hajj of every pilgrim this year and every year it has been performed, ameen.