The early generation of African American Muslims embraced the idea that their ‘Muslim-ness’ makes them distinct and unique from other Americans.
aaa

An important aspect of all early African American Islamic movements was their emphasis of themselves as distinctly different from other African Americans, and their work within the community to uplift the condition of others that were not Muslim.

It was also during an early time, the African American Muslim began to get a better understanding of Islam and what it actually meant to be a Muslim.  In the early 1900’s there were no books on Islam and even encyclopedias at the time erroneously classified Islam as a ‘Mohammedan’ religion implying it was the ‘Mohammed’ version of ‘Jesus’.  Yet, contrary to these obstacles early converts did in fact declare “There is no god, but Allah.”

But by far, the greatest challenge to the African American Muslim’s identity was the introduction and influx of a massive amount of Muslim immigrants from the developing world that exploded like a rainbow of varying cultures that gripped the country from the 1970s and beyond.

Before this massive immigration, the collective American consciousness only knew of Muslims as ‘those funny dressed’.

Many immigrant Muslims had a specific agenda to spread a particular cultural trend in the west.  African American Muslims were troubled and angered that immigrants ignored establishing Islamic institutions and opening separate mosques and Islamic centers.  They were surprised and disappointed when Muslim immigrants began to speak on behalf of all Muslims in America and acted as if their arrival was the genesis of that Islamic reality.

Thus, the African American Muslim found his national Islamic identity being encroached upon by this new ‘other’.

A Link between Religious and Cultural Identity 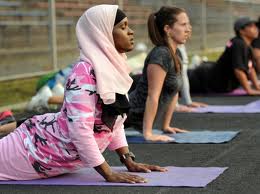 Those who decided there was no dichotomy between being American and Muslim placed great importance on community and civic engagement and interfaith dialogue.

Certain norms within the African American Muslim’s cultural identity began to unravel as new converts clung heavily to the examples of these Muslim immigrants as some did not distinguish Islam from culture.

Severe schisms developed from within the African American Muslim community as to who was more ‘orthodox’ or the correct Muslim.

In turn, the African American Muslim’s cultural and religious identity became divided into mainly two groups – those who were distinctly American and/or Afro-centric, and those who became ‘nationless’ with the conviction that Islam was the only culture needed or wanted.

Without over-simplifying, to varying degrees, those who decided there was no dichotomy between being American and Muslim  placed great importance on community and civic engagement and interfaith dialogue.

There was no thought to excluding women from education or Islamic activities under the guise of modesty, but rather including them in masjid administration and boards. These Muslims often ran soup kitchens, food banks, shelters, drug rehab and other services to uplift the condition of the downtrodden.

Yet again, without over-simplifying, those who felt Islam itself was their only nation and culture, placed great importance on developing their own community life by empathizing and taking on the activities of Muslims from other countries and by understanding and spreading the Islamic thought from the sunnah of  the Prophet (peace and blessings be upon him).

Women were treated similar to their Muslim counterparts in the developing world.  However, children were taught Arabic and Qur’an to help solidify the Islamic culture within the family.

Although not engaged in the outer society, this early generation of  African American Muslims embraced the idea that their ‘Muslim-ness’ makes them distinct and unique from other Americans.

These Muslims initially had broad contact with Muslims from other countries seeking guidance and examples from them.

Differences Can Work for Unity

Interestingly, divisions with varying extremes to the right or left on both sides of identity often exist within the African American Muslim family structure, even between siblings or parents and children.  Although that reality appears debilitating, this dynamic may be the sole healing force to unite and expand the African American Muslim cultural and religious identity.

Recent years have seen a small resurgence of nationalism and militancy within both schisms in the African American Muslim community as they struggle to maintain Muslim family life and define themselves in the ever expanding definition of an American Muslim identity.

Yet Allah, The Most High, continues to allow Islam to arise out of a people who are both builders and descendants of this land; to have a conviction to define themselves and their culture as both Muslim and American.

So the distinctiveness of  African American Muslims is our own, and we have and will continue to survive the assault…