The young adult book chronicles the lives of Jules Khan and his personal bodyguards, Angelina and Klaus. This book focuses on one main theme: respecting all beings on Earth, regardless of nationality or religion.

The story is a narrative about a young teenager who is the son of a Swedish, Jewish mum and a Persian, Muslim prince, set in the 1940’s. As the story unfolds, it takes on the same formula as the normal Marvel comic book hero.

A teenager gains superpowers, from Mother Nature, to fight off the Evil National Weapons Association, as World War Two rages on. If we want to avoid more chaos and conflict in the future, we should embrace our human diversity. That is the central message in the story.

Numerous teachers, teenagers and adults have started rating the book, which discusses sensitive topics, while remaining very entertaining and enjoyable. 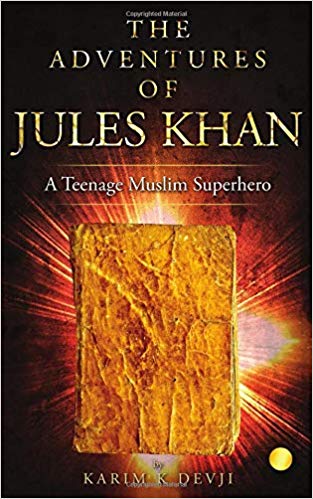 As there is still not enough diversity in American superhero movies, ‘the Adventures of Jules Khan’ is definitely paving the way to more inclusiveness.

Multiple copies are being sent to movie houses to start the long term process of hopefully becoming one of North America’s unicorn success stories.

Karim Devji, the author of the book, very humbled by the positive comments on his work, is excited about the results and hopes that it gets picked up by Marvel, DC, Walt Disney or other big studios.

One of the US based editors for punctuation and grammar, Rachel Fogg, wrote that it is “an excellent book for teenagers and adults. Jules will remind everyone of the important things in life’.

We, too, are happy about this initiative!  You can buy this book here.