The memory of the massacre still haunts the city, where Muslims have become a minority.
aaa

“Not Allah, not the United Nations, not anything can help you. I am your God. “These were the words uttered by Bosnian Serb commander Ratko Mladicas he boarded a bus carrying Bosnian Muslims from Srebrenica to Serb held territories for mass execution.

Mladic’s trial formally started in the Hague in 2012 for committing crimes against humanity in 1995 when the Serbs stormed Srebrenica, a town in eastern Bosnia. Srebrenica had been declared a safe zone in 1993 by the UN Security Council and was, during the invasion and the mass massacres, under the protection of the Dutch UNPROFOR (United Nations Protection Force).

No one believed that the city would fall. There was a firm belief among the political circles of Bosnia that the international community would not allow the declared safe area to fall under any circumstances. After all, the UNPROFOR had demilitarized the town and, according to Bosnian then-president Alija Izetbegovic`,it had threatened to withdraw its forces if the Muslims received any military aid.

In order to fully understand the dimensions of Srebrenica’s massacre, its tragedy must be told within the tale of the broader Yugoslav war. When Yugoslavia’s founder,Josip Tito, died in 1980, politicians Like Slobodan Milosevich in Serbia and Franjo Tudman in Croatia started playing on nationalism and eventually rose to rule. Most prominent of them were Serbia’s Slobodan Milosevich, and Croatia’s Franjo Tudman.

The former pushed for a nationalist Serbian agenda while being the head of the Serbian League of Communists, and the latter for a Croatian national agenda when he formed the Croatian Democratic Union in 1989. Both leaders believed that Bosnia must become a part of their national state, either greater Serbia, or greater Croatia.

Milosevich provided huge military support to Chetniks (Bosnian Serb warriors) in Bosnia, encouraging them to ethnically cleanse the country from its Muslims and Bosnian Croats to become a Serb-majority country, while Tudman provided military support in return to Croatian separatists in Bosnia, encouraging his proxies to ethnically cleanse Bosnia from its Muslims and Serbs to become a Croat-majority country.

Bosnia’s Muslims were thus caught between the upper and nether millstone. Nothing but war was in front of them, of which they had to courageously face, or be annihilated.   Yugoslavia at the time was formed of Serbia (the larger of the nations), Croatia, Slovenia, Bosnia and Herzegovina, Macedonia, and Montenegro.

But with an apparent Serbian hegemony over Yugoslavia,Croatia and Slovenia declared independence in 1991 and a war broke out between them and Serbia. An arms embargo was imposed on all Yugoslav countries to lessen the fighting, but this gave a huge advantage to the Serbs who inherited a massive stockpile of Yugoslav ammunition. Croatia and Slovenia were strong enough to halt Serb attacks, but Bosnia, which decided it was not staying in greater Serbia, became an ambition for both Croatia and Serbia and got dragged into an unbalanced war.

The first three years of the war were very hard on Bosnia. Serbs set up Nazi-like concentration camps around the country, a horror that was brought back to a European mind still struggling to forget the past. But the resilient Bosnian Muslims started to advance against the mighty Serbs. News of victories echoed from western and central Bosnia at a time when the international community was pushing for peace talks. That is when the Serbian General Mladic decided to attack Srebrenica. 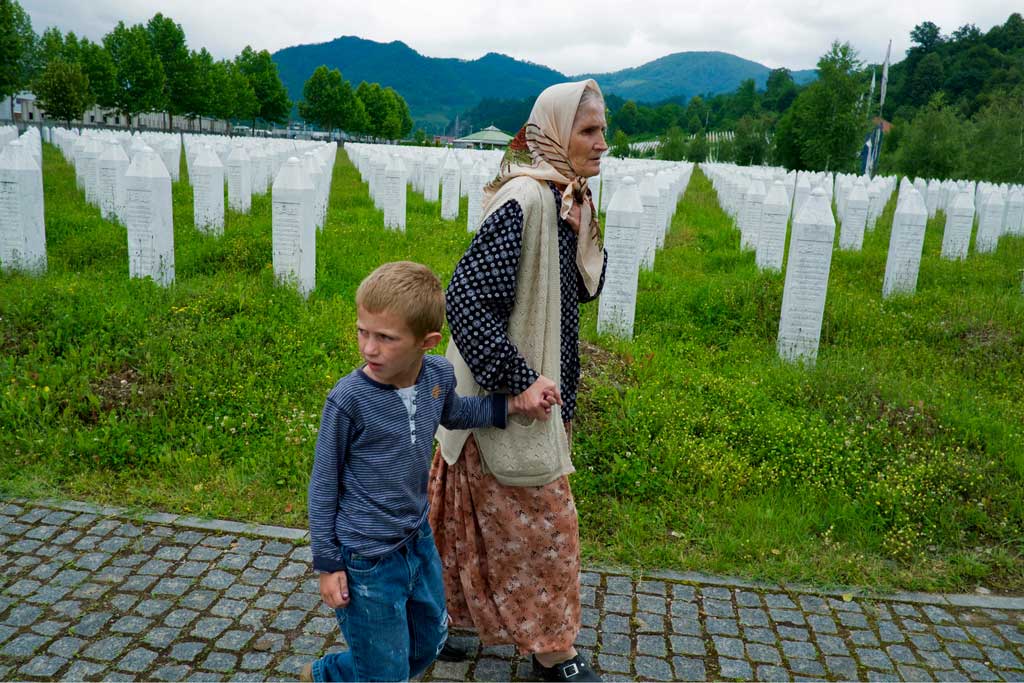 On 11 July 1995, the Serbs took over the town amidst the horror and disbelief of its inhabitants. They did not meet any resistance. For days the inhabitants waited for airstrikes promised by the international community that never came to end the Serbian siege. The masses fled in a frenzy to a UN camp where they were promised, again, they would be safe.

But at the UN camp, the Serbs started separating the men from their families, led them to warehouses and empty schools, and then later to buses that took them to execution fields. They were either lined up and shot or got crammed into empty shacks and were killed by hand grenades or shower bullets.Within a period of five days, around 8000 Muslim men were massacred.

The women who were left in the UN camp were taken by Serb soldiers and were systematically raped. Girls who were taken in the middle of the night returned to the camp with blood between their thighs, and in the mornings, many of them were found hanging from tree branches. They took their own lives because they couldn’t bear the horror that they experienced. Many of the women who were raped and lived were profoundly traumatized. Some required psychological treatment for ten years to be able to talk about their experiences.

It is impossible to know the exact number of rapes that took place in Srebrenica. But the true horror of this massacre lies not just in the numbers, but also in the fact that the town was under the protection of the UNPROFOR.

“Whether Janvier [the general commander of Bosnia’s peacekeeping mission] was cynical or misguided, he is more responsible than any other individual for the fall of Srebrenica. The restrictions on the use of air power that he actively endorsed, and his decision not to approve Close Air Support on Monday, July 10 had disastrous results. More than any other UN official, he betrayed the people of Srebrenica,” wrote journalist David Rohde in his award-winning, horrifying book Endgame: The Betrayal and Fall of Srebrenica, Europe’s Worst Massacre Since World War II.

The memory of the massacre still haunts the city, where Muslims have become a minority. The magnitude of the tragedy can be felt where Srebrenica’s genocide memorial resides in Potocari, a town that lies six kilometers northwest of Srebrenica.

The world vowed that after the Holocaust such atrocities would never be repeated; yet they were in Srebrenica. And after Srebrenica, the world vowed yet again, but they are now being repeated in Syria and Iraq with even greater magnitude. How many massacres and genocides have to take place until the world finally decides to act? It seems that we’ve been doomed to the horrors of repetition.