Tayyaba Syed during her speech.
aaa

On October 21, 2017, over 150 women came together in Houston for Daybreak Press’s 3rd Annual Muslim Women’s Literary Conference. Attendees came from various cities across the US. Majority of the attendees were Muslim but even some non-Muslims were present, one of whom embraced Islam at the conference itself!

This conference, hosted by Rabata, Sisters Committee of ISGH (Islamic Society of Greater Houston) and the Islamic Da’wah Center, is a testament to women coming together to have their voices represented.

The esteemed speakers included Anse Tamara Gray, founder of the nonprofit organization Rabata, Dr. Jamillah Karim, who is an award-winning author from Atlanta, Tayyaba Syed, a journalist and award-winning author from Chicago, Nahela Morales, a blogger sharing her journey as a Mexican-American Muslimah, Jenny Triplet, a best-selling author and media personality from Atlanta, and Najiyah Maxfield, who is the Editorial Director of Daybreak Press Publishing.

Asmaa Hussein, founder of Ruqaya’s Bookself was also scheduled to speak but was unable due to unforeseen circumstances.

The day was blessed with Quran Recitation, followed by Nasheed Performance by Laila Nass and Asmaa Halooul. Rabata Program Manager, Afshan Malik, introduced the Rabata Organization and Sisters Committee. Then she moved on to introduce the distinguished panelists.

Rabata founder Anse Tamara Gray was first up with her research on Unearthing Linguistic Authentication in Translation. Next up was Dr.Jamillah Karim, who presented a speech on Reclaiming our Space: Journeys through Race, Class, and Gender in Islam. Tayyaba Syed opened up Your Treasure Chest: Stories Unfolding Through Journalism.

Jenny Triplett emphasized The Value of Your Voice: A Spotlight for Muslim Women Authors & Entrepreneurs. Najiyah Maxfield took us on a voyage to the world of publications   Treasure Map: Adventures on the Many Paths to Publication. The day ended with a Panel Q&A and Final Book Signings.

Amongst the books on display there was Joy Jots by Anse Tamara Gray, Drummer Girl by Hiba Masood, Sophia’s Journal by Najiyah Maxfield, Surviving Marriage in the 21st Century by Jenny Triplett. Noor Kids’ Creative Developer Tayyaba Syed has two books due out soon The Blessed Bananas & Call me Mary.

About Islam: Tayyaba, why do you believe such conferences are crucial?

Tayyaba Syed: “By sharing our experiences and expertise in writing and publishing, we are igniting awareness amongst the audience on how to own our narratives as Muslim women in America. It is so important to find our place on the literary landscape and know that we belong here.

We have so much talent, creativity and uniqueness to offer to today’s literature and media, and this conference showed how we can effectively bring out our voices on so many different platforms. The Muslim Women’s Literary Conference gets bigger and better each year, and we can’t wait to see what’s in store for 2018! See you there!” 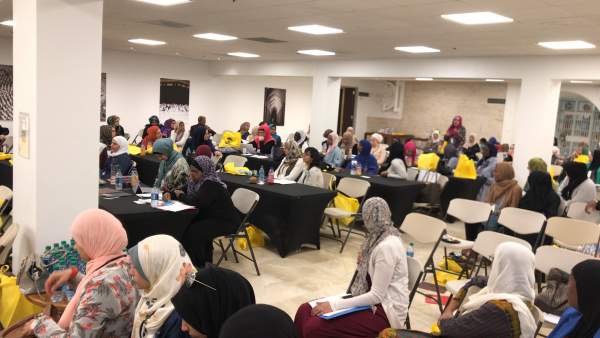 Audience at the conference.

About Islam: Jenny, what is the recipe for marital success?

Jenny Triplett: “The recipe for marital success is in the book my husband, Rufus, and I co-authored Surviving Marriage in the 21st Century. There are 13 ingredients for marital success that can help you get to twenty years and beyond; amongst them communication, treat your marriage like your job, don’t try to change the person you married, listen don’t just hear, agree to disagree, spend a lot of time together, want to know the rest check out our book:)”

About Islam: Nahela, why do you believe this is a critical time for the rise of both Muslim and female writers?

Nahela Morales: “My blindfold about Islam and Muslims came down very rapidly when I took it upon myself to “READ”. I didn’t allow myself to be fed false propaganda about a religion I knew nothing about. It was then, that, I became extremely fascinated to learn about the fact that this was also the first command to our beloved Prophet Muhammad (peace be upon him) by the Almighty. He was instructed to READ in the name of his Lord.

So, early on I learned it was vital and an obligation upon us Muslims to seek knowledge. And so, I read and read and after so many books including the Qur’an I knew in my heart that Islam was for me. But it wasn’t until I came across all the rights Islam brought to women that things became crystal clear and began to make even more sense. Again, it took lots of reading to get to this point to eventually take the leap of faith and embrace Islam as my new way of life.

With that said, it is critical for us Muslim women to amplify our voice with our pens like never before. Our narrative must change but only through our lense, our history, our stories, our experiences and with our voice. Now more than ever because…

Silence is no longer an option, we must be the voice for the VOICELESS, hope for the hopeless, nour (light) for those in the darkness, inspiration for upcoming generations and those who come after us, bi’ithnillah. With knowledge, one finds understanding. With understanding, one finds acceptance. With acceptance one frequently finds friends…” #WomenSpeak#LoudandClear 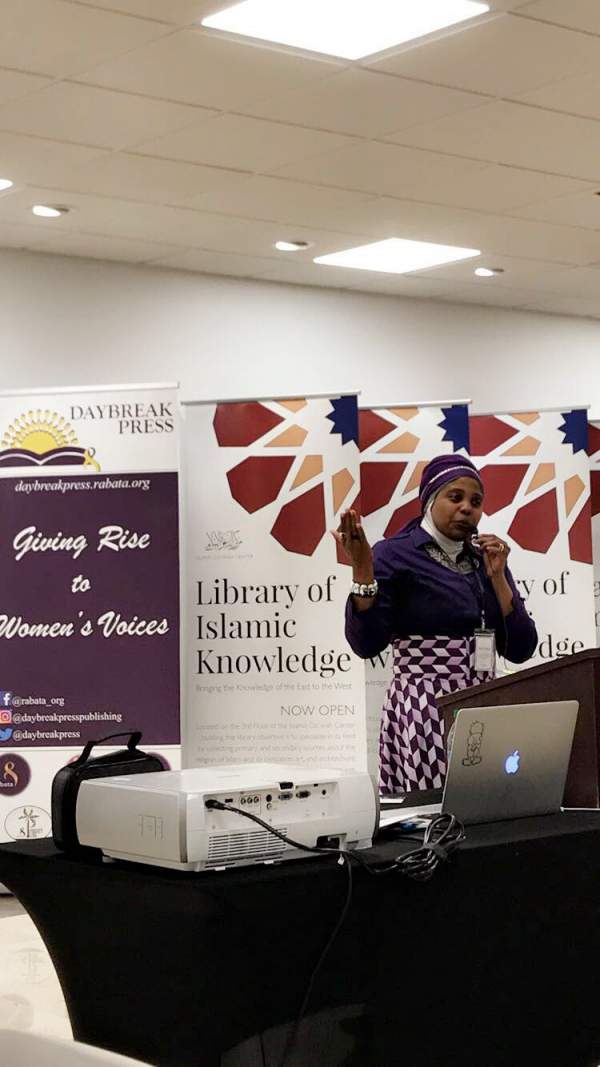 Jenny Triplett during her speech.

About Islam: Najiyah, How can Muslim, female writers change the narrative?

Najiyah Maxfield: I feel that this is a time of the convergence of several variables that have come together to create great opportunity and responsibility for both Muslim and female writers. While Islamophobia and misogyny have increased in some quarters, this has created more open-heartedness, curiosity and camaraderie in many others, so people are eager to hear our stories.

Fortunately, at the same time, the stage the internet and publishing are at – where blogs are easy to build, indie publishers are proliferating, and self-publishing is more respected, affordable and high-quality than ever – has made our stories easier to tell and amplify.

Finally, seeing this surge in publishing has inspired those who may have been reticent before! So I think we have to grab this golden moment to correct and “authenticate” the false narratives that shaped the Islamophobia and misogyny in the first place.

How do I know if the attendees were inspired? My daughter was one of them 🙂  She woke us up before fajr, backpack ready and eager to start our drive to Houston excited to meet up with her favorite authors. She had just completed the Jannah Jewels series and was looking forward to meeting one of its co-authors Tayyaba Syed. She was also in the process of reading Sophia’s Journal by Najiyah Maxfield, so it accompanied her on the road trip to Houston.

Once there, she was so excited and thrilled to have made it to the conference. What better, she had an ideal seating, just next to Noor Kids books so she made sure to gobble them all up.

I felt how empowered she was being there, having this opportunity to get her voice heard. Yes she did have a question to one of the panelists on one of her books!

Her out of this world experience was when she walked up to some of the authors and showed them a compilation of her writings and illustrations and was met by admiration and tips on how to move forward. My daughter left head up high, an unapologetically strong female future Muslim writer in shaa Allah.