Lubna of Cordoba is a remarkable example of a self-made woman. If you have not heard of her, please take a moment to brush up your world history knowledge.

She was a 10th century jack-of-all-trades, and a master of them too. She worked in the royal court in Andalusia during the Ummayad dynasty. She was a poet, library master, mathematician, and palace secretary. While having a female intellectual and in court or in a royal position was not rare in Andalusian times, it wasn’t exactly common.

Lubna was not the only female in the sultan’s court, but she was one of few. In other words, she was a strong, self-reliant lady with an angle of experience that could rival any politician or governing body we know of today. She could probably land any job she wanted today.

Lubna of Cordoba lived in the 10th century CE, and died in 984. She was the personal palace secretary for Sultan Abd al-Rahman III and his son after him. She was born a Spanish slave girl, rising to prestige in the Andalusian royal court. As her origins were not royal or noble, it speaks to the amount of trust and respect the royal court must have had for her to be given such responsibility and to be considered important enough to be the personal secretary for the sultans. 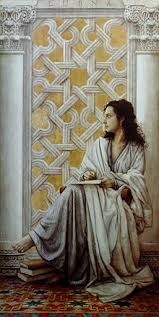 She also oversaw the royal library, some saying she was acquisitions expert, presiding over 500,000 books. She traveled across the Middle East chasing books to add to her library, with records of her travels to Cairo, Damascus, and Baghdad. Lubna was one of the first female solo travelers.

Her library was one of the most important and famous of its time. Putting a woman in charge was proof of great trust, and a clear counter argument against anyone who says all Muslim women have been disrespected throughout history by Islam.

As a scribe, she added works to the royal library of Cordoba that she had transcribed herself, even translating many important historic Greek texts that would have otherwise been lost to time.

There are stories of her roaming the streets of Cordoba and teaching the children who chased after her mathematical equations. She must have been a splendid teacher, because the children actually came back to learn more math. Which, as far as I am concerned, is a straight up miracle.

Lubna is unique because she rose so high from origins so disadvantaged. She’s an inspiration to the Muslim youth today, which also aims high and wide.

This article was first published on Mvslim.com