“A Private War” is one of 2018’s latest drama movies. Based on a true story, it is about the famous war correspondent Marie Colvin, the American journalist who worked as a foreign affairs correspondent for the British newspaper The Sunday Times.

Coupled with the distinguished war photographer Paul Conroy, multiple-award-winning Colvin undertook the duty of showing the world the true cost of wars in a number of war-torn countries.

Directed by Matthew Heineman, and starred with Rosamund Pike and Jamie Dornan, the movie covers the pinnacle of Colvin’s career from 2001 to 2012.

In 2001 she went to Sri Lanka to cover the Tamil Tigers, where she lost her left eye, which made her war an eye patch ever since. The movie then tracks her travels to Iraq, Afghanistan, Libya, and Syria to cover the human suffering during the wars in these tumultuous countries.

A key ingredient to the intense realism of this movie is its director. He is an academy-award nominated documentaries director whose career was focusing on the world’s most dangerous places, and “A Private War” is Heineman’s narrative feature debut.

The shooting took place in London and Jordan, where he met a large number of refugees from different countries. The director chose real Syrian refuges to play Syrian people in Homs living under fire. He also chose real Iraqi women who lost family members to play the grieving Iraqi women standing at a mass grave of their relatives. In this movie, the line between reality and fiction is very blurry, which adds much to its credibility.

Rosamund Pike’s performance is stunning. Being famous for her roles in “Pride and Prejudice” and then “Gone Girl”, which led her to an Oscar nomination, Pike made sheer transformation, physically and even vocally, to perfectly fit in the role of the famous journalist.

Watching this movie, you will see Pike as you have never seen her before. She has received a Golden Globe nomination for best performance by an actress in a motion picture, the drama category, and in expected to be nominated for the Oscars. 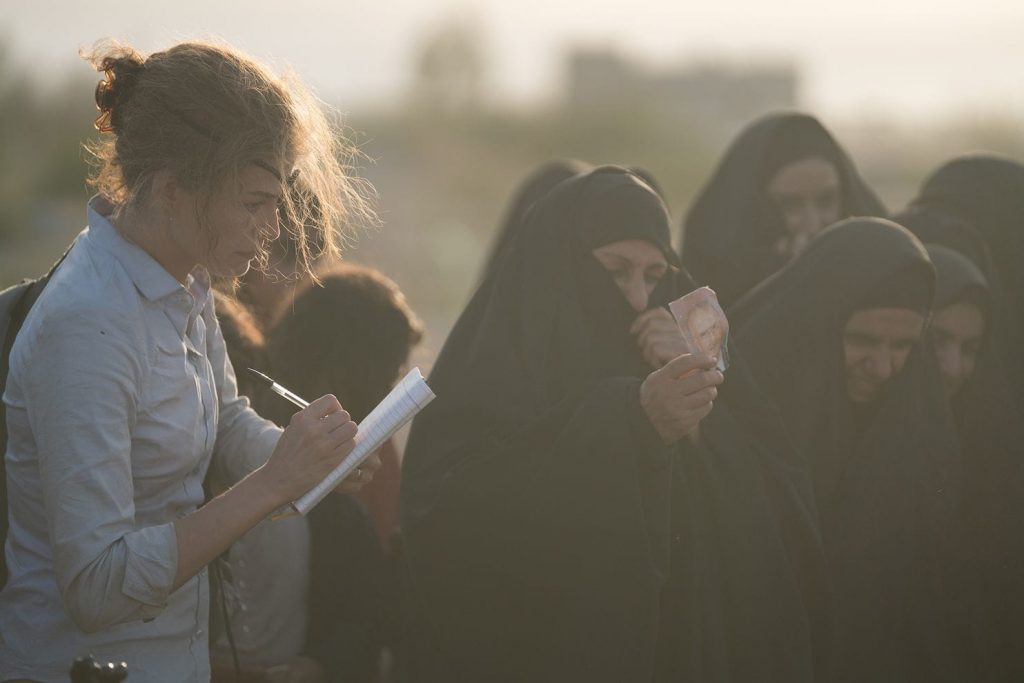 A tribute to all journalists

Marie Colvin paid a very high price for her heroic career and multiple awards, she suffered Post-traumatic stress disorder, experienced anxiety attacks, had frequent bloody nightmares. She spent some time in a rehab, became an alcoholic, and engaged in a few sexual activities to silence the noise of war in her head.

A quick glance at her Colvin shows that she is fearless, but looking thoroughly one can easily find out that this is not the case. She was in fact full of fear, and human vulnerability, yet her sense of responsibility to tell the world the stories of the human suffering filled her blood with adrenaline enough to take new dangerous assignments risking her life.

This movie is obviously a tribute to Colvin’s career. But it is also a tribute to all war correspondents all over the world, those unknown soldiers behind who provide newsrooms with materials to work on. With every breaking news we watch live, or read, with every op-ed analyzing any war, we have to remember the very high cost those correspondents pay.

Most of the famous critically acclaimed movies about journalists, like All The President’s Men, The Insider, Spotlight, The Post, and others, are basically about investigative journalists exerting tremendous efforts to uncover the truth about hot topics. What is different about this movie is being about war correspondents, taking the audience and their great sacrifices, which are not only them risking their lives in the battle fields, but also suffering mental health diseases in the aftermath.