The old poem that most American school children recognize begins “In 1492, Columbus sailed the ocean blue…” Indeed, in the year 1492, Christopher Columbus (whose real name in Italian was Cristoforo Colombo) sailed across the Atlantic in the name of the Spanish crown and landed in the Caribbean part of North America.

For hundreds of years, it has simply been accepted that Columbus was the first explorer to valiantly sail across the sea and “discover” the Americas. However, this theory no longer stands up to modern scholarship.

It goes without saying that the first people to truly discover America were the ancestors of the Native Americans, who probably crossed into North America through Russia and Alaska about 12,000 years ago. Discussion of the “discovery” of the Americas by Europeans, Africans, or Asians is an insult to the history of its indigenous peoples. That said, the first daring souls to cross the Atlantic Ocean by boat are important to know, and the theory of Columbus does no justice to their story.

While the common knowledge about Columbus is that he lived in a time where everyone assumed the world was flat, this is clearly not the case. Ancient Greek scholars such as Aristotle and Pythagoras suggested that the earth was in fact, round.

It was during the Muslim Golden Ages (c. 750-1100s) that advanced scholarship into the shape and size of the earth began. Contrary to what most people may believe, in those years, it was common understanding that the earth was not flat. The debate, instead, was about exactly how large the earth was. In the early 800s, the Abbasid Caliph al-Ma’mun assembled the brightest minds of the day (including al-Khawarizmi) in Baghdad who calculated the earth’s circumference and were off by only 4% of its actual size.

Knowing that the earth was round, and knowing its size to a very good degree of accuracy (without the modern technology we have today), some intrepid Muslims must have attempted to go around the world, hundreds of years before Columbus. The proof of these voyages is in front of us, in black and white. 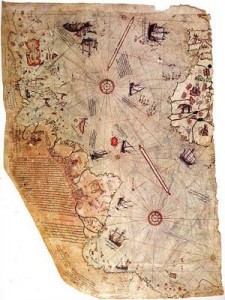 Piri Reis based his map on earlier sources, which clearly had a very good understanding of the Americas and had explored the area well before the first Europeans.

The great Muslim historian and geographer Abu al-Hasan al-Masudi wrote in 956 of a voyage in 889 from al-Andalus (Muslim Spain). that sailed for months westward. They eventually found a large landmass across the ocean where they traded with the natives, and then returned to Europe.

Al-Masudi records this land across the ocean in his famous map and refers to it as “the
unknown land”.

Two more voyages from Muslim Spain to the Americas are recorded in history. One was in 999 and was led by Ibn Farrukh, from Granada. The other is recorded by the genius mind of the geographer al-Idrisi, who worked in the multi-cultural and religiously tolerant Sicily of King Roger II in the 1100s. He wrote of a group of Muslims who sailed west from Lisbon for 31 days and landed on an island in the Caribbean.

They were taken prisoner by the Native Americans on that island for a few days. Eventually, they were freed when a translator who lived among the natives that spoke Arabic arranged for their release. They eventually sailed back to al-Andalus and told their tale. The important part of this account is the existence of an Arabic speaker among the natives, indicating that there must have been more unrecorded contact between the Arab world and the Americas.

There is another part of the Muslim world that had contact with the Americas before Columbus. In West Africa in the 1300s, a powerful and incredibly wealthy empire called Mali existed. The most famous leader of this empire was Mansa (king) Musa. The most memorable event of his reign was his epic hajj journey in 1324.

The caravan of over 60,000 people made an impression everywhere they went, including Egypt, where Mansa Musa told the story of how he came to power. His brother, Abu Bakr was the Mansa before he was.

During his reign, Abu Bakr sent a fleet of 400 ships to explore the Atlantic Ocean. Only  one ship returned, which reported that they found a land across the ocean. Mansa Abu Bakr then outfitted a fleet of 2000 ships, which he sailed with personally, that sailed west into the ocean. They were never heard from again.

While there is no record in Mali of the result of that voyage, there is evidence of their arrival in the Americas. There are numerous archaeological sites in North and South America that attest to that Malian presence.

Early Spanish explorers and pirates recorded abandoned cities in Brazil that had inscriptions identical to the language of the Mandinka (the people of Mali).

More inscriptions in the Mandinka language were found in the United States as well. Near the Mississippi River, many inscriptions exist that recorded their exploration of the Americas. In Arizona, an inscription was found that reads “The elephants are sick and angry.

At present there are many sick elephants”. This inscription also includes a rough sketch of an elephant. Elephants are not native to the Americas. They were brought by the Mandinka to the Americas, and the inscriptions are proof of Mansa Abu Bakr’s successful journey over 100 years before Columbus.

In 1929, an amazing discovery was made in Istanbul, Turkey. A map drawn in the year 1513 by the Ottoman 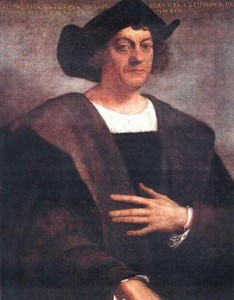 cartographer, Piri Reis was found. Reis wrote that his map was based on earlier sources, including ancient Greek and Arabic maps, including maps by Christopher Columbus, who had sailed only 21 years earlier. What is remarkable about this map is the level of detail of the map, which forced historians to re-evaluate the Columbus theory of exploration.

The map clearly shows the eastern coast of South America, which is in the correct position with regards to Africa. The coast of Brazil is shown in incredible detail, with many rivers accurately placed on the map. Although Reis used Columbus’s maps as a source, Columbus never went to South America, so Reis must have gotten that from earlier Muslim maps that he used as sources.

Furthermore, Reis’s map includes the Andes Mountains, which were not even explored by Europeans until the 1520s, a full decade after the drawing of Reis’s map!

Piri Reis based his map on earlier sources, which clearly had a very good understanding of the Americas and had explored the area well before the first Europeans. The map is perhaps the strongest physical evidence of Muslim exploration of the Americas before Columbus

What Did Columbus Say?

With all of this evidence of Muslim exploration before Columbus’s voyage in 1492, is Columbus himself knew he was not the first? It’s more than likely to be the case. Columbus sailed from Spain in the same year the last Muslim dynasty of Iberia was destroyed in the Reconquista.

Many of the people of Iberia were still Muslims, and carried with them the knowledge of the Muslim Golden Ages. Numerous people on Columbus’s voyage were Moriscos; Muslims who were forced to convert to Catholicism or die. Columbus could have heard from Spain’s Muslims of the New World and was thus inspired to go exploring.

Once he got to the Americas, Columbus records numerous examples of Muslims already present. He commented on the gold that the natives had, which was made the same way, in the same alloy, as the Muslims of West Africa did. Furthermore, Columbus records that the native word in that area for gold isguanin, which is very similar to the Mandinka word for gold, ghanin, which probably comes from the Arabicword for wealth, ghina’. 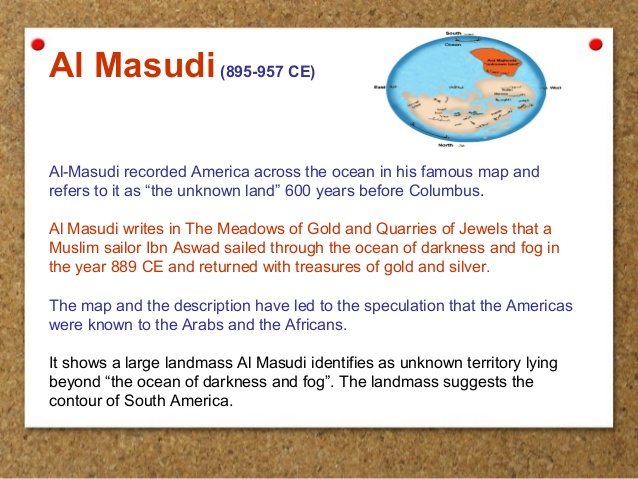 Even Columbus knew that he was not the first to cross the Atlantic Ocean.

Clearly, the theory that Columbus discovered America is nothing but an old tale that has not stood the test of time. There is no doubt that the Columbian Era was a pivotal time in world history that changed the way of life in the Americas and Europe forever. However, he was not the first to make the crossing to the Americas.

Evidence exists from the Arabs, West Africans, and Ottomans of Muslim voyages to the Americas well before Columbus and Christian Europe. For whatever reason, the textbooks continue to extol the voyage of Columbus and the courage of his crew, the “first” to make it across the Atlantic. This idea clearly needs to be re-examined in light of evidence from earlier Muslim explorations, to bring their contributions to the general public.

This article was first published at lost Islamic history.com