“If We Aren’t Allowed to Take Up Space, We’ll Create Space Ourselves.” Muneera Rashid

Muneera Rashid, one half of the hip-hop duo ‘Poetic Pilgrimage’, is a Jamaican-British slam poet, public speaker and actress. As one of the speakers during the Belgian arts centre De Roma‘s ‘female focus’, the vibrant artist gave her perspective on what feminism, decolonization, patriarchy and resistance mean to her.

Great Britain without its migrants

I’m from a Jamaican background and my parents came to England in the 60’s, to do the jobs that nobody else there wanted to do. They worked doing those jobs and thus built Britain when it was devastated after World War II. That’s why I say unapologetically that if it wasn’t for migrants, who were asked by Britain to come over, the NHS-system would not exist. And now, as migrants who built this country and have been living here for generations, people who do not know their ancestral country anymore, are being said ‘oh, there’s a chance you live here illegally, because in the 70’s we didn’t have good migration laws’ – what is this? Britain doesn’t want its migrants, we’re still seen as ‘others’.

The question we should ask ourselves is, are we allowed to take up space?  I’m a black woman, a child of a migrant and first generation born in Britain, but I am still aware of the privileges that I have as well. I’m aware that I have a passport and what it means to have it. I have a platform that I can use. So there are times in which I think, I should give my space to those who do not have those privileges. It is about centering people who traditionally are not centered.

Decolonization of what we see as beautiful

When people try to figure out what is wrong with these kind of role models, they make the mistake that we constantly make in our society. We want to be able to label problems and say ‘this here is racism, this is colorism, this is sexism – and the problem with that is that we are not able to effectively deal with these situations. We should look at these problems from a holistic perspective to be able to deal effectively with them. Yes, those different categories are important to keep in mind, but they are not sufficient.

This knowledge of societal structures and how they are intertwined both locally and globally is important – knowledge about intersectional feminism. I know about the first, second and third wave feminism, but I’m sure only few feminists know about Jamaican feminism. We are learned that white feminism is the only kind of women’s liberation. Around the world, women are told that they are not liberated, until they are liberated by white feminism – So, apparently, my grandmother didn’t do anything to resist patriarchy. We have to tell those alternative stories and go beyond that onedimensional view of what women’s empowerment looks like.

I’ve been an artist for many years, but my work wasn’t always valued. I would come to an institute and people would be like, ‘oh, you’re black – tick! You’re a woman – tick! You’re a Muslim – tick! Are you left handed?! – tick! Here’s our box! We don’t need to do anything else!’, but they wouldn’t really respect my value.

I know that, as an artist, organisations made tens of thousands of pounds based on what I look like, based on my image, and would later pay me a few hundred pounds and ask me to walk home. It was unfair and unethical. That’s why I went to university, I knew that people would look at me in a different way. Now that I have a MA degree, people respect me more, even though I have been educating people long before having that degree. 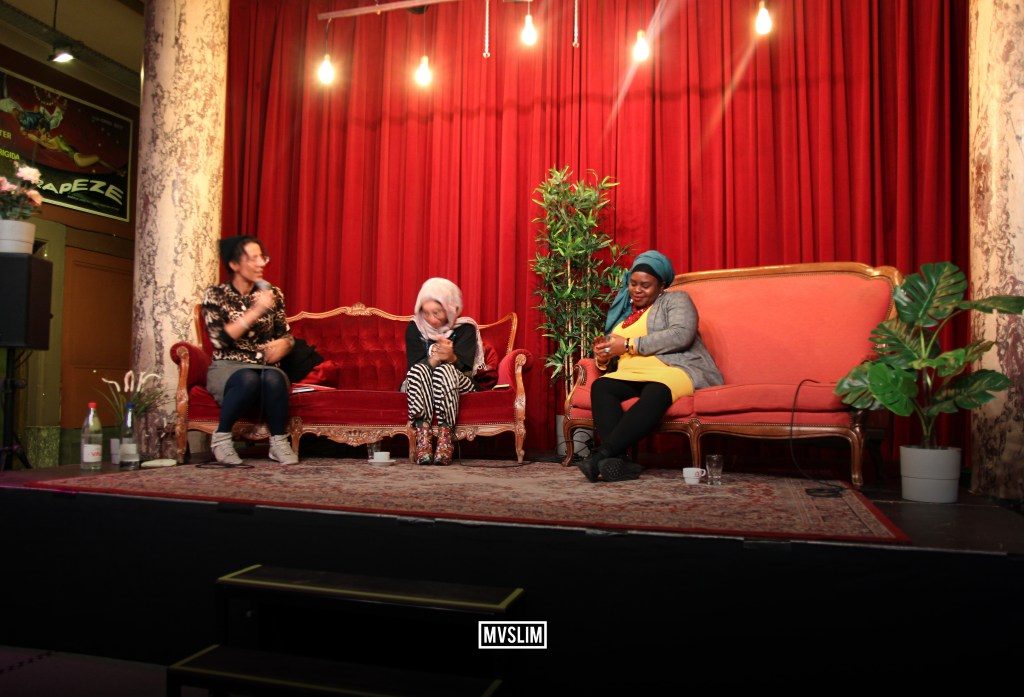 In a society where you are not seen as the ideal and designed to make you feel like you’re going crazy, that you are wrong and are ‘hysterical’, it is important to check in with yourself and asking yourself if you are ok? Sometimes I get the feeling that I’m crazy, because I know that some things are wrong and immoral, but I am pressured to believe that those things are okay, because they are ‘completely within the legal frame’. I try to find a balance within myself and find a group of people where I can talk freely.

But the struggle is there all the time and I’m never free of my own self-doubt: the doubt about my artistic me, the Muslim me, the me that is a woman, a black woman… Am I good enough? Most of the time, I try to combat these whispers and define for myself what those identities mean to me.

For example, what it means to be a Muslim differs from individual to individual. Every Muslim will have a different idea of what Islam means, even if they give you the same answers to your questions. I try to define for myself what it means to be these things. It’s normal to doubt yourself, everyone has those doubts – just always remind yourself what is important and right to you. To me, my spirituality is important. When people tell me that I’m not good enough,I ask if my Creator believes that I’m good enough. That’s the only thing that matters to me.