Abdul Raouf was stunned to see the huge towers and the shopping malls surrounding the Ka’bah.
aaa

Title: From Makkah to Las Vegas

Publisher: Madarat for Research and Publishing

I was on an escalator in a shopping mall when this provocative title grabbed my attention. I rushed to the bookstore that was displaying the book and bought it. I’ve been reading for a very long time, but titles still lure me. It was a really good book.

Professor of architecture Dr. Ali Abdul Raouf begins his book by explaining why he put the purist city, Makkah, and the sin city, Las Vegas, together in one title. Abdul Raouf chose this shocking title because he himself went through four shocks.

His first shock took place when he visited Makkah for the first time to performumrah, or the small pilgrimage. He was stunned to see the huge towers—especiallyAbraj Al-Bait Tower, the Makkah Royal Hotel Clock Tower and the shopping malls—surrounding the Ka’bah.

His second shock happened when he visited Las Vegas and found there was a lot in common between its architecture and what he saw in Makkah.

The third shock occurred when he visited the Vatican City and found architectural harmony in St. Peters Square. He noticed how the churches were respected and given prominence over other important buildings in the city.

Fourthly, Abdul Raouf realized that Jerusalem, despite its occupation, still preserves its genuineness and nobility.

The book is divided into five chapters. The first chapter emphasizes the paramount importance and holiness of Makkah, with quotes from the Qur’an and the prophet’s sayings that highlight the city as the focus of prayer (the qiblah) for Muslims all over the globe, the destination of the annual pilgrimage (or hajj), and the birthplace of the Prophet and also of Islam. The author then explains the philosophy of the annual pilgrimage and how it’s mainly about leaving behind a material life while exerting a physical effort to attain spiritual progress.

His third chapter delves deeper into the discussion of the recent expansions that happened in Makkah, and whether the demolition and subsequent building that took place should be considered as development or vandalism. Abdul Raouf mentions the destruction of the house of Lady Khadija, the Prophet’s first wife; the Ajyad fortress that dates back to the Ottoman Empire; and other historic sites that are closely tied to the start of the Islamic revelation. The destruction of these landmarks cuts contemporary Muslims off from their roots, he says.

Regarding the architectural approach taken to erect new structures that replaced these and other historic spots, Abdul Raouf says the new buildings are huge and quite close to Islam’s holiest of mosques and that pilgrims are frequently distracted by them while conducting their circumambulations around the Ka’bah. The author questions, for example, why a huge clock, larger than London’s Big Ben, was built right next to the Ka’bah. 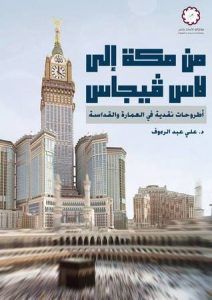 In the fourth chapter, Dr. Abdul Raouf addresses the similarities he sees between the architecture in Makkah and in Las Vegas. Both cities boast mainly huge, extravagant structures that lack any aesthetic or historic sense. Both cities also witnessed the demolishment of older buildings.

The fifth chapter underlines the negative impact of the expansions on the holiest city on Earth, which happened in the name of development. As an expert in his field, Abdul Raouf explains that expansions and developments could have been done without destroying the spirit and the core of the place.

It’s a good book that I hope will be translated to many languages to reach more and more members of the ummah.