“And proclaim that the people shall observe Hajj pilgrimage. They will come to you walking or riding on various exhausted (means of transportation). They will come from the farthest locations.”   ~ Qu’ran 22:27

When pilgrims think about packing for the sacred journey of Hajj lots of things come to mind to ensure all goes well. Pilgrims carry things that their needs from toiletries to medication, but one big thing that they can’t pack is how to cope with the extreme heat.

The five day pilgrimage will take place in Saudi Arabia’s hottest months of the year, namely June, July and August for the next nine Hajj periods – at least! The average day time temperatures in Makkah will range from 45 degrees Celsius in August to an average of 39 degrees Celsius in June and July.

Pilgrims will need to make every effort to ensure they do not suffer from heat related illnesses such as heat stroke, heat exhaustion or dehydration. Saudi Arabia is doing its best to help to alleviate the unbearable heat by installing huge umbrellas to cover courtyards at Al Haraam and the Prophet’s Mosque in Madinah.

They both have cooled marble flooring and readily available zam zam water. Air-conditioned tents are in use at Muzdalifah and now at Arafat. Fanning water sprays have been installed at various points of the outdoor journey to help cool the atmosphere. Even police officers come equipped with backpack-mounted water sprays and pilgrims can get a ‘Mecca umbrella’ which provides shade and has a mini fan that blows a fine water spray.

Despite all their efforts, heat exhaustion is something that is common for pilgrims because a many come from cooler climates. In fact, for Hajj 1439 (2018), an estimated two million pilgrims are expected to make their way to Makkah. This has prompted the Ministry of Health of Saudi Arabia to post a warning on their website that advises the elderly, pregnant women, children and those with terminally illnesses to postpone their Hajj due to the crowds and unique health risks.

The extreme heat makes it difficult for the body to suddenly cope and thus it is unable to function properly. Certain types of people are more affected than others, such as the elderly, diabetic, those with heart problems, those who are considered overweight and females in general. 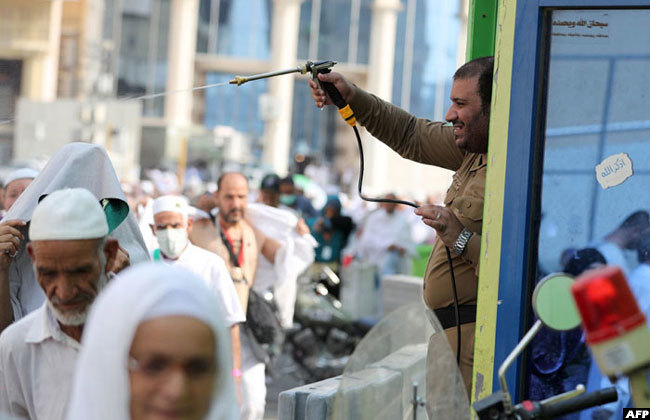 1- Carry bottled water – this is an easy fix and even if you finish your water on the way, there are usually zam zam water urns around and if not ask someone if water is available to fill your bottle if not replaced with a new one.

2- Unscented Sunscreen – it may just be limited to your hands and face but it definitely helps in blocking the damage from the intense heat. Ensure it is unscented and NOT water resistant so you can do ablution.

3- Wear lightweight clothing – some material is thick and insulating and adds to the feeling of being hot. If possible, try and get light weight clothing like a cotton blend which is breathable and will allow you to feel fresh.

4- Rest – when you get time to rest after Hajj rituals– take it and use it to your benefit especially if you are not feeling well. It’s the body’s way to tell you to slow down.

5- Hydrating foods –Fruits and vegetables are known to have high water content so try eating more to help keep you hydrated. Stay away from caffeine as it draws moisture away from the body.

6- Avoid Peak Hours – during the hottest months of the year namely June, July and August try and do your tawaf early before it gets too hot or later when it begins to cool down. The same applies for your Sa’i, the rituals on the Day of Arafah and performing the ritual stoning of the Devil.

7- Not feeling well – seek help straight away if you feel faint, want to vomit, have a constant headache, experience blurred vision, and feel weak.

Do take the necessary precautions and heed the warning. Allah (swt) knows best.