Damascus, or ‘Dimasyq’ in Arabic, was a perfect blend of ancient civilization, Islamic history and contemporary culture.
aaa

I dread to imagine that among the raped ones was one of the Syrian women I had met in 2004!
If it were not for those two beautiful, big, brown eyes, I would not be writing this chronicle.

I quietly made up my mind on a calm and cool morning, after which rain gently stroked the earth and fluffy clouds were making way for a colorful rainbow. The tender breeze and refreshing scent of nature, despite its pleasing look, had cruelly reminisced some of the faintest memories at the back of my mind.
Such torturous recollection only added to my long misery, as I along with many have been witnessing a blessed, once vibrant and peaceful land torn and ruined.

There were many times when I really wished I had not visited the country, or seen those big, innocent eyes.
At least my heart would not be so ripped apart and agonized by the painful conflicts and an ongoing, unnecessary war. But then again, to undo what had happened was impossible, and to avoid recollecting those resting memories for the sake of my mental equanimity would mean selfishness.

The story has to be told, I decided, while slowly pulling together the scattered bits of jigsaw puzzle and put them in place.

Damascus, or ‘Dimasyq’ in Arabic, was vibrant. An exotic bridge between history and the modern world, it was a perfect blend of ancient civilization, Islamic history and contemporary culture.

It was dawn, sometime in early spring if I remembered it correct, in a town near Damascus when I first saw those two eyes. Our paths crossed on that day, by fate.
Salsabeel was four or five years old, innocent and lively. She had a pair of light brown eyes, brunette curly hair, a broad gaze, an infectious smile, mischievous expression and a cute laugh – all the features of a perfect daughter any woman would desire.

With her parents and younger brother, 2-year-old Muhammad, they accompanied me and a group of friends for a tour around Syrian cities in 2004. Known to a close friend of mine who was studying there, the Syrian family had generously offered to take us on a tour for free, a warm gesture of hospitality and human fellow-feeling.

Damascus, or ‘Dimasyq’ in Arabic, was as vibrant as Salsabeel. An exotic bridge between history and the modern world, it was a perfect blend of ancient civilization, Islamic history and contemporary culture. The local people call it ‘Shaam’, and most Arabs regard the country as the most beautiful among all Arab nations.
Both the city and country had witnessed innumerable historical events whose spectacular remnants dazzle the country even today.

The country’s historical past is gorgeously manifested in the forms of grand fortresses, finely designed masjids, antique houses and ancient buildings of great architectural and archeological value.

Its native people, the Syrians, have further added worth to the existent splendor of Damascus; they are polite, decent, warm-hearted and soft-spoken. Despite the usual political and economic conflicts (obviously not a monopoly of Syria), I found the scenic and peaceful country deeply inspiring.

We were selflessly hosted by a Malaysian family known to us, back then from Egypt. The presence of Salsabeel and her family members made the trip much more enjoyable; both because her parents were indigenous Arab, knew the places very well and spoke perfect Arabic. The children’s presence kept us wide awake with endless conversations, teasing, jokes and laughter.

The second best place was Aleppo city, or Halab in Arabic. Aleppo is the largest and most populous city in the country. Its most significant landmark is the Aleppo citadel, a large medieval fortified palace bearing testimony to the occupation of Byzantines, Greeks, Ayyubids and Mamluks.
Considered as one of the oldest and largest castles in the world, the citadel stood charming and elegant in the center of Halab, unchallenged by any of the modern day’s skyscrapers. 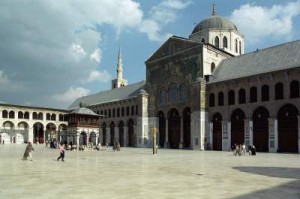 The Umayyad masjid, also known as the Great Mosque of Damascus, built in 634.

After subsequent days of exploring Dar’aa, Homs and other small districts, we finally had the privilege of seeing the untold part of Syria, its rural community and its lifestyle. Salsabeel’s father took us to his village located in
a beautiful and peaceful remote area, to join a special family dinner. It was a quiet night, with a full moon and a constellation of stars smiling down at us.

Sitting in a verandah-like space around a small table, I marveled at the abundant, home-made, mouth-watering food. There were rice, grilled chicken, a variety of multi-shaped breads, traditional olives, yoghurt, fresh vegetables, and different types of sauce and dressings.

The fruits served as desserts were plucked fresh from the nearby family garden. Salsabeel’s family members kept pestering us to eat more and more, until we had to really insist that we already overate and were surfeited. We talked and laughed and enjoyed the serene night together, until we almost forgot it was time to leave.
Such kindness and hospitality is rare in today’s harsh world. In the midst of endless hullabaloo and indifference of the modern people, I found love and comfort in a Syrian family, and especially in a four-year-old girl’s smile and company.

Each day I woke up, dreading to know further news on how many more had been killed, and how longer the war would continue.

Two or three days later I left Syria for Egypt, with tearful eyes and a heart full of admiration for the country and its wonderful people. It never occurred to my mind that anything could disturb the peace of a nation so full of energy and wonders.
Until nine years later when Syria was swept by the great Arab spring, I was oblivious to the fact that I was once there, on the very same land where blood was being shed and dignity was shamelessly smashed.

The sweet memories of Syria in my mind were clouded by my daily routine and anxiety. When it finally became too evident that the nation was plunging into the biggest catastrophe none in that country could ever imagine, I forced my heart to come to terms with reality. I was in denial before, not wanting to admit and accept that Syria was in a state of calamity.

Memories are powerful indeed. They hold an authority to do two opposite things to your heart: either bring delights or shatter it mercilessly. That agonizing pain, denial and emotional torture one feels when one loses someone one loves or sees a horrible thing while in a state of helplessness was my exact feeling as I watched and read the news everyday on the Syrian civil war. One by one, the districts I visited were captured by battles and civilians were slaughtered ruthlessly.

Each day I woke up, dreading to know further news on how many more had been killed, and how longer the war would continue. I shivered as I saw the number of casualties climbing up each day.
Women have been raped and children have been abused and tortured at the hands of vindictive government forces and the militia. I dread to imagine that among the raped ones was one of the Syrian women I had met in 2004!

I kept asking myself though I begged God not to tell me the answer. No word could describe my disgust and grief to see images of dead and injured Syrian children on the street, with parts of their shattered bodies scattered nearby. All the piled up emotions, together with my sense of helplessness finally broke in soft tears.
I screamed and wept in silence, perhaps with the rest of the world, as Syria continued to suffer slowly.

Where Are You Salsabeel?

I was in denial before, not wanting to admit and accept that Syria was in a state of calamity.
The thought of Salsabeel and her family, as the nostalgia became clearer, only served to add to the pain I was going through. 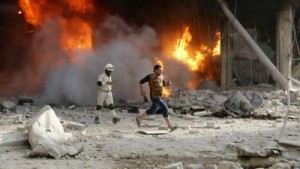 Each day I woke up, dreading to know further news on how many more had been killed, and how longer the war would continue.

Where was Salsabeel? What had happened to her and her family? To contact them was out of question, and so I only had my imagination left, to quench my thirst for an answer.

The worst of possibilities attacked my already lacerated heart: was she tortured and killed by the militia? Was she one of those children I saw in the pictures circulated in the news? The ones with shot wounds in the heads and amputated limbs? Or had she and her family been internally displaced? Or did they get kidnapped and had disappeared then? Or had they safely fled the country to join the other millions of Syrian refugees elsewhere?

Part of my mind battled to stop these ongoing questions but another part kept pushing them down my throat. I hated myself for asking such questions, because I knew whatever the answer was, it would be painful to swallow.
I also hated myself for having gone there. If the trip never happened in the first place, Syria would not hold such a special place in my heart. And most of all, in the wildest of ironies, I hated Salsabeel, only because I had fallen in love with her.

I fell in dire love with her smile, her eyes, her laugh and her innocence the first time I saw her, and not knowing her whereabouts put me in the nastiest feeling of guilt, confusion, anger and sorrow.

The wishy-washy attitude of the western powers, the irrational support of Russia and Iran for the Syrian regime and the helplessness of Muslim countries have all given a vicious green signal for the killing and oppression to go on. There is no sign of end, or any symptom of regret by the Assad combatants with regard to the loss of innocent lives.

Salsabeel, along with other hundreds of thousands of harmless Syrian children were paying the price of this horrendous crime. The only good thing about the felony was, perhaps, that it had given life to the bits of faint, dying memories in my mind. And now that the memories had been recalled, I gathered strength to engrave this memoir as a testament that I had not betrayed Salsabeel.

In my deep meditations, I desperately hoped that Salsabeel, along with other Syrian victims were safe and sound somewhere, and that they could still feel secure, just like the coziness her family had offered me nine years ago.

If Salsabeel had not survived the ugly war, I prayed that she was somewhere in heaven, with her smiling eyes, dwelling in eternal bliss in God’s protection.