Given that the origins of the Islamic faith are in the city of Makkah, in present-day Saudi Arabia, the northern regions of Canada have been a sort of “final frontier” for the spread of the message of Islam.

For over 1,400 years, this message has gradually been carried by Muslims to wherever they have gone, and by the mid-20th century the Canadian far north was one of the very few places left in the world still not exposed to the faith and its followers. But by the 1940s, this was changing. And it was there, in a small northern town in the province of Alberta, that Islam’s century-long journey to Canada’s far north began.

Today, Lac La Biche, Alberta (located about 140 km northeast of Edmonton) is still a remote, quiet town, home to about 2,300 people. It must have felt even quieter to the three Lebanese families that immigrated to it in the 1940s and, by 1946, had settled down in the town.

They had followed a Lebanese Muslim pioneer and entrepreneur, Ali Ahmed Abouchadi, who arrived in Lac La Biche in 1906 and became involved in the fur trade with the Indigenous peoples of region—in the process, he became probably the first Muslim to speak the Cree language. Another early Muslim in Lac La Biche was Mohamed Abuali Gotmi, who arrived in 1911. He was initially an employee of Abouchadi but eventually set up his own fur trading business. Gotmi, too, quickly picked up Cree as well as five European languages.

More Lebanese families arrived in the 1950s, most of them Muslim and virtually all of them from only two neighbouring villages (Lālā and Kharbit Rūha) in Lebanon’s historic Biqā‘a Valley. 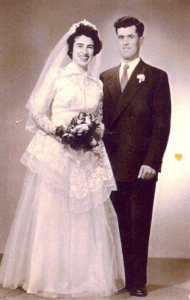 By 1969, the community had grown to 40 families of Lebanese origin, 36 of which were Muslim. Many of them worked in mink ranching, and the furs produced by some farmer (such as Jim Tarrabain and Sine Abougoush) became recognized nationwide for their high quality. These early Muslims made up a significant minority in Lac La Biche, where they intermingled (and in a few cases, intermarried) with Canadians of Ukrainian, French, British, and, most prominently, Métis ancestry.

“We talked about tolerance, understanding, and always having those strong morals and values. Honesty, hard-working and trusting… because the community allowed us to practice our religion and culture, we never felt other than comfortable and we belonged,” remembered Anne Tarrabain, who used to work on the mink ranch in those early years with her husband Jim.

By 1969 the Muslim community in Lac La Biche made up around 10% of the town’s population, the largest proportion of Muslims in any town or city in North America at that time. In 1957, twelve members had come together to form the Arabian Muslim Association of Lac La Biche. The following year, the Alkareem Mosque (as it came to be known) was built in the town, the second mosque in Canada and only the third in all of North America. The mosque served as a place of worship, a Qur’ān school, and a general place of gathering for Lac La Biche’s Muslim community.

In 1962, arrangements were made for a qualified Lebanese ‘ālim (a person educated in the traditional Islamic disciplines) to come to Lac La Biche on a three-year contract to serve as the community’s imām. Part of his work was to preside over marriage and funerary ceremonies, and as a Qur’ān teacher.

Because of this imām’s limited knowledge of English, he made little effort (nor was he asked to do so by the community) to engage with members of other religious communities in Lac La Biche. However, he was very active within the Muslim community. As one observer noted, “here on the edge of the great boreal forests of the Canadian northwest one can hear each weekend the chanting of Qur’ān and Arabic dictation, all much as if one were sitting in a Biqā‘a Valley village.” 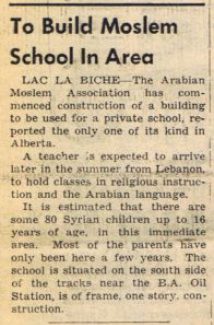 This is a very broad-strokes description of the early Muslim community in Lac La Biche, Alberta, and doesn’t explicitly delve into the many day-to-day challenges faced by individual Muslims and the community in maintaining their faith. Not only did they lack the technology that allows today’s Canadian Muslims so stay interconnected with Muslims across the country and around the world, but they also lived in a very remote part of Canada.

A 1969 study of the Muslim community in Lac La Biche showed the difficulties in maintaining everything from the daily prayers to the fasting of Ramadan, and questions about reciting the Lord’s prayer in school, celebrating Christmas, marriage, dating, observing ‘Īd, and “Muhammad” becoming “Mike” were often uncomfortably debated within families and the community.

Nevertheless, the community survived and held on firmly to its faith and traditions. Though no longer leading North America as the town with the largest of the proportion of Muslims in the population, to this day nearly one of every six residents of Lac La Biche is of Lebanese origin. The Alkareem Mosque was rebuilt in 1986 and is still in operation today, and is recognized by the residents of Lac La Biche as an important part of their heritage. A major park and pond just outside of Lac La Biche are named after “Alexander Hamilton”, the English name taken on by Ali Abouchadi over a century ago.

Of course, the journey did not stop at Lac La Biche. Muslims continued to pursue opportunities even further north and settling in the Nunavut, Yukon, and Northwest Territories as well as the northern reaches of Quebec. We will follow this incredible journey in the next article in this series.

This article was first published in ihistory.co