‘Why Can’t I be a Sushi ‘ is documentary by Hoda Elsoudani that follows the journey of two young sisters – half Iraqi /half Argentinian Niamh (age10) and Sofia (age 8) who are curious about the on-going sectarian conflicts amongst Muslims. It reveals their journey as they seek answers to why historical decisions of the past have created a growing number of extreme Muslims with an intolerant mentality.

The documentary was premiered at the Tricycle theater in London to a packed audience on the 6th of March 2016 with the full attendance of the film’s crew and cast.

In a world where the film industry is mostly dominated by men, it may be a challenge for some but in Elsoudani’s experience, people were very supportive and encouraging of her work and according to her “even more so because there aren’t many British Iraqi female directors around.”

One challenge that she does admit to enduring and believes that many may relate to is the “difficulty of fitting in the mainstream media and getting our voices heard as an ethnic minority.” This is one of the reasons behind her effort to continue the journey of filmmaking so she can open up doors for more female directors from different ethnic backgrounds.

The idea of the documentary started many years ago when Elsoudani was still a student during both college and university years and was constantly asked or pushed into a sect but she openly labeled herself as just a ‘Muslim’ “I personally have seen a lot of discrimination and misjudgment towards followers of the opposite sect. Shias would speak badly of Sunnis and Sunnis would speak badly of Shias and all the misconceptions would be flying everywhere passed from one person to another as if there were inerasable facts.” Soon, she found it got very common as she got older, the same pattern continued even at the work place.

In one particular institute Elsoudani felt that she was very much discriminated against because she simply refused to belong to any of the sects. She admits that “it’s very disappointing that as Muslims we hold such forceful, judgmental mentalities and that we have forgotten the countless similarities we have in common with one another.” Elsoudani believes humanity comes first – “to treat each other with mutual respect, believe what we want to believe and leave the judgment to God!”

Describing herself as a ‘Sushi’ in the sense that she takes a bit from both sects, Elsoudani explains that the idea came about based on her personal experience. As she felt that people were always trying to make you to belong to one sect or the other and the first question they would ask before anything was whether you were a Sunni or Shia, and when you respond to it by saying that ‘I’m just a Muslim’ that wasn’t enough! – “that really bothered me.” Said Elsoudani, adding that she also felt that there were many misconceptions about both sects that need to be addressed, “that people needed to be reminded to go back to their routes and embrace the simplicity of just being a Muslim regardless of which sect one follows!”

Art as a means of change

The Sectarian conflict in Iraq impacted Elsoudani’s work greatly as she elaborated that we have all watched the news “where you hear about a suicide bomber who has just killed X number of souls targeting a particular sect and you’re left with a bitter, anger feeling were you wish you can do something to help but you feel immensely helpless.”

Therefore she decided to direct that energy into a film that will enlighten people, especially the younger generation. She recalls how many years ago in Iraq, people from different faith groups and sects lived very peacefully together. They would marry into the same families and so on and so forth and Elsoudani wanted to bring that back. “People may have an opinion that the film is painting a romanticized picture of Sunnis and Shias uniting but I would say if it existed once, then it can exist again just like we are able to live with other people of a different faith group.”

She believes strongly that we can “be less arrogant and more accepting of the other sect, and that’s why in one scene in the film I decided to interview a Sunni- Shia couple.”

Ensuring that the film was approached in a balanced way was a top priority for Elsoudani, although she admits it was tricky at times because “I would often question whether I was representing each sect fairly.” The last thing she wanted to do is “add more fuel to the fire especially because it’s such a sensitive subject, so I kept it 90% scripted and mainly focused on what concerns each sect has towards the other. Whether I achieved my goal or not, I would leave that for others to judge!”

Elsoudani’s aim was to interview as many diversely opinionated people as possible, because she wanted to keep the film “realistic, rich in content and welcoming to different kinds of people.”  She wanted to include influential figures who could have added a greater impact to the film , for example Tariq Ramadan or Sayed Fadhil Milani and even Sami Yusuf as a major music artist who puts a lot of spotlight on the issue of unity through his Music, but unfortunately some declined the interviews and others didn’t respond or couldn’t make it in time for the deadline.

However quiet naturally and understandably she believes some had a “fear of being misrepresented in the documentary, as it’s difficult to trust everyone’s journalism in our modern times.”  This made Elsoudani believe that she does not think “I particularly 100% succeeded in representing a variety of opinions.”

In ‘Why Can’t I be a Sushi’ there were pointers towards the religious differences especially when Shaykh Bahmanpour was talking but Elsoudani says that the point of the film is not to ask why there are differences of opinion, but rather why these differences have led to violence and animosity. “To me the conflict seems to be more political than religious although it may be hiding behind the religious language as Dr Anas Al-Tikriti pointed out.”

The main focus and intentions of the documentary is to objectively address as many key points as possible that “one sect would have towards the other sect and then breakdown the misconceptions so that some kind of bridge can be built between the two sects once they realize that they have so much in common.”

During Elsoudani’s research from speaking to many different kinds of people from both the Sunni and Shia sect “it was clear that there were much more misconceptions about Shia practices in general in comparison with the Sunni Sect when judging the actual Shia doctrine itself regardless of how people are practicing it” She also emphasizes that the “Shia’s are also the minority who are mostly being targeted and killed so naturally one may argue that it’s only fair to put a lot of emphasis on this issue.” 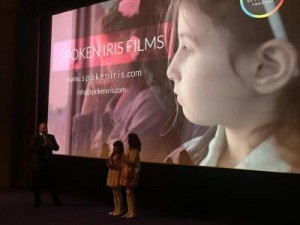 The documentary was premiered at the Tricycle theater in London to a packed audience on the 6th of March 2016.

However she has tried to balance that out by “addressing the unacceptable cultural practices that some Shias practice for example the Shia minority that beat themselves in the month of Muharam as well as the issue of “cursing” which was very clear in the documentary.”

By using two young girls for such a complex documentary, Elsoudani wanted to take people back to their routes, remind them of the simplicity of the religion of Islam. She felt that if she addressed such a complex and sensitive issue so “simply through the eyes of 2 innocent yet mature children, that would somehow have a great impact in influencing mindsets, because it connects us to the child within and makes us reflect on our actions, behaviors and thought patterns more than if it was a documentary presented by adults.”

Elsoudani describes the reaction received from the diversely mixed audience as “phenomenal”. The Cinema theatre was overly packed and it seemed as though people were very enthusiastic and hungry for such a film. Prior to the screening, most people were very supportive of the film and eagerly waiting it’s release, although Elsoudani did receive three to four abusive emails from both Sunni and Shia individuals “who would not care to unite Muslims and would rather wage a war than wave a peaceful flag!”

The love of tapping into identity issues or cross cultural issues or something that enliven the conscious and promote peace is what pushes Elsoudani to persevere and produce more unique works. “I mostly love addressing unspoken social or political subjects that we tend to shy away from.  And that’s why I recently established my own production company, which I called Spoken Iris Films.”

She is currently working on a short video in support of the refugee crisis but her next major project will probably address something along the above lines.