If Muslims came to Spain in the 8th century, and were expelled, at least from this region of Spain, Catalonia, in the 15th century, surely there must be some evidence or presence of Islam in Barcelona.

Muslims first step foot in Barcelona in the 8th century when ‘the Moors’ conquered the city but their presence lasted less than a hundred years as ‘the Franks’ occupied the city turning it into a military strong post. Still, the Muslim presence in the Catalan region surrounding Barcelona remained for quite some centuries.

As I discovered, Catalonia, the most north eastern province of Spain, bordering France, did indeed have an Islamic influence.  Barcelona on the other hand, did not. At least, that is what I was able to determine having searched the internet and contacted a number of Spanish publishers who specialized in the history of the region.

My search found one publication which mentioned traces of the Islamic architecture in what is Barcelona’s oldest church, Sant Paul del Camp. Built outside the city walls surrounded by green fields as its name suggests (Camp = Countryside), today it is just a short walk from Las Ramblas the main tourist street of the city.

Arriving late Sunday morning at the church I noticed a small crowd gathering within the church. Outside stood a sign reading ‘Entry to cloisters 3 Euros’, I thought, what luck! Inside I asked a lady where I might find the cloisters only to discover that they would be open briefly after Sunday Mass, for which she invited me to stay. 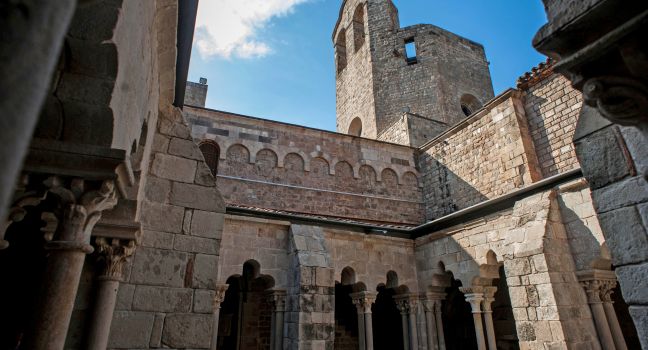 Traces of the Islamic architecture in what is Barcelona’s oldest church, Sant Paul del Camp.

Now it has been years since I have attended any form of Sunday service. It may have been a regular feature when I was a young boy at boarding school, but since then, like many of my Christian friends, I had not attended one. I thought to myself, why not, I will stand at one of the pews towards the back.

As the service began my first thought was that this is no different than going to a mosque where the sermon is conducted in Arabic – I understand one, just as much as I understand the other. Looking around, aside from a couple of Polish girls who like me, were waiting to visit the cloisters, the vast majority of individuals were elderly couples.

In a strange way, while the church was subtly high tech with an integrated speaker system and good lighting, the balance of old church with old churchgoers seemed to synchronize a certain harmony.

This simple fact is proof to me that not only must there have been dialogue between Muslims and Christians during this period, but that dialogue was so good that a church building included strong Islamic design themes.

Every now and then a word I would recognize would be spoken, the most common being the reference to Prophet Jesus where in addition to saying “Peace be upon him” I would add, ‘There is no god but Allah’.

While I know and believe this to be true, that sitting in a church where today Prophet Jesus is referred to as the ‘son of God’ (Exalted be God above the false things ascribed to Him), I simply would not have felt complete without professing these statements to myself.

As I pondered the history of the building while visiting the ‘Islamic’ cloisters, an elderly Catalan gentlemen was telling the two Polish girls that this church was built on land that used to be a mosque.  Of course the official version found almost everywhere reads that the Benedictines built this church after a Muslim raid destroyed the previous church in 985 AD.

Whether there was a church first or a mosque first, I do not know, in fact, to me as a non-historian, it does not really matter – I will  let the historians have that discussion.
What mattered to me was the fact that this small cloister built in the 12th century featured Islamic Moorish architecture.

This simple fact is proof to me that not only must there have been dialogue between Muslims and Christians during this period, but that dialogue was so good that a church building included strong Islamic design themes.