Muslims conquered the city of Jerusalem in 637 during the caliphate of ‘Umar ibn al-Khattab, they sought to resurrect Jerusalem as a place of worship.
aaa

When prophet Muhammad (peace be upon him) received the command from God to lead the Muslim community in five daily prayers, their prayers were directed towards the holy city of Jerusalem. For Muslims, the city of Jerusalem is an important site. As the home of numerous prophets of Islam such as Dawud (David), Sulayman (Solomon), and ‘Isa (Jesus), the city was a symbol of Islam’s past prophets.

When Prophet Muhammad (PBUH) made the miraculous Night Journey from Makkah to Jerusalem and the Ascent into Heaven that night (known as the Isra’ wal-Mi’raj), it acquired an added importance as the place where the Prophet  led all the earlier prophets in prayer and then ascended to Heaven.

Throughout the complex and war-torn history of this city, the Mosque has been a center-piece of the struggle for Jerusalem. With Muslims, Christians, and Jews all considering the land under the Mosque as especially holy, the importance of understanding the history of this land is of utmost importance.

Part 1 of this article will look at the history of the Mosque before the arrival of Prophet Muhammad (PBUH) and the early Islamic period until the coming of the Crusaders in 1099. Part 2 will describe the al-Aqsa Mosque’s history from the Crusades to the modern day.

Before and After The Prophet

For Muslims, Islam was not a new religion in the 600s when Prophet Muhammad (PBUH) began preaching in Makkah. Instead, it is seen as a continuation and capstone of the traditions of earlier prophets that are revered by all three monotheistic faiths.

The message of Muhammad (PBUH) only continues and perfects the messages of Ibrahim , Musa , and ‘Isa, which had been corrupted over time. Thus, for Muslims, the Temple of Solomon that was built Jerusalem’s Temple Mount in ancient times was in fact part of their own religious history.

With this mindset, when Muslims conquered the city of Jerusalem in 637 during the caliphate of ‘Umar ibn al-Khattab, they sought to resurrect Jerusalem as a place of worship. The ancient temple of Jerusalem had been rebuilt numerous times, most recently by Herod around 20 BCE. By 70 CE, however, the Romans destroyed the temple after a Jewish revolt in Palestine. Jews were forbidden from entering the city and Judaism all but died in Jerusalem.

The area where the temple stood remained as a wasteland for the next few hundred years. The Romans used the area as a garbage dump, so when ‘Umar entered the city and went to see where his religious forefathers such as Dawud and Sulayman had worshiped (which was also the place where Muhammad ) PBUH)  had worshiped during the Isra’ wal-Mi’raj)  he found a the area filthy and unusable as a mosque.

Nevertheless, he decided to clean the area and built the al-Aqsa Mosque. As was his custom, he worked alongside average Muslims in cleaning and purifying the area. They erected a basic mosque that could fit about 3000 people at the southern end of the Temple Mount, now known by the Muslims as the Haram al-Sharif, the Noble Sanctuary. A contemporary Christian pilgrim described the mosque as a large wooden structure built upon earlier ruins.

For the Muslims, they did not see this as trampling on the holy sites of other religions. Since the same prophets that are mentioned in the Old Testament of the Bible are accepted as Muslim prophets, the new mosque was seen as a continuation of those earlier places of worship. This went in line with one of the central themes of Islam – that it was the perfection of earlier monotheistic faiths. 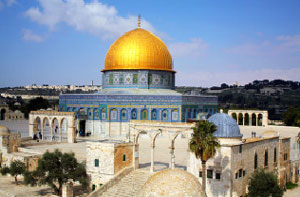 For decades, this simple structure built by ‘Umar remained the main building on the Haram. In 690, however, the caliph ‘Abd al-Malik of the Umayyad Dynasty rebuilt the al-Aqsa Mosque, much larger and more stable than the mosque that ‘Umar had built. The basic plan of the current mosque dates from this reconstruction. ‘Abd al-Malik’s real architectural achievement  however, was what was constructed about 200 meters to the north.

Above the rock from which some Muslims believed Prophet Muhammad ) PBUH)  ascended to Heaven from, ‘Abd al-Malik built the magnificent Dome of the Rock. As part of the al-Aqsa Mosque, it was not a separate house of worship, nor was it meant to compete with the al-Aqsa Mosque, but was meant as a complement to it.

Using the architectural traditions and mosaics that the Umayyads had learned from the Byzantines who ruled the area before them, the Dome immediately became one of the focal points of Islamic architecture in the 600s.