A Muslim wedding in Pakistan lasts for about a week up to ten days, traversing daily festivities.
aaa

Question: What happens inside an air-conditioned marquee, almost uncannily during the months of June, July or December; amalgamates families and relatives scattered all around the world, has enough bling to fill up a swanky store, and is the primary breeding ground for further events of its kind?

No matter how much most Pakistanis love to hate Pakistan for its plethora of life problems, what no Pakistani will ever condemn or complain about, no matter how hard they try to, is a Pakistani wedding. Pakistani weddings keep most international airlines and local textile businesses thriving and in-business, all year round.

A Muslim wedding in Pakistan lasts for about a week up to ten days, traversing daily festivities. There are many customs and traditions associated with a Pakistani Muslim wedding ceremony. Since Pakistan was partitioned from India in 1947, many of these customs are shared by the people of both countries.

On a night a week or so before her wedding, the bride-to-be is pampered with a light facial and body massage by the ladies of her family, in order to make her look radiant on her imminent wedding. They congregate at her parents’ home to rub her face, arms, hands, feet, and shins with a bright yellow/mustard-colored paste known as ubtan, which is made from turmeric and other ingredients.

So that her clothes do not get smeared with the color of the ubtan, she wears yellow-colored clothes on this night: the traditional shalwar kameez or ghagra with a stole called the dupatta on her head, and yellow bangles. Her hair is oiled and braided with an ornate thread ornament known as the paranda. She is then expected to not bathe for a few days in order for the ubtan to seep deeply into her skin.

Over time, the ubtan ceremony (which is also known as mayyoon) has lost its practical significance and is held only in name, lacking the spirit and purpose for which it was traditionally convened decades ago. Many Pakistani’s now choose to forego it altogether. 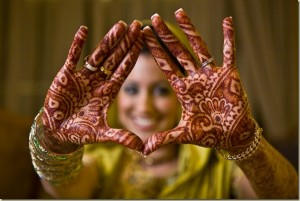 Hosting all the female relatives and friends of the bride, professional henna artists are summoned to apply beautiful henna designs on to the hands and feet of the bride and her guests.

The bridegroom’s family used to traditionally bring large goblets and trays of fresh mehndi paste to the bride’s parents’ home, which would then be used to embellish the hands and feet of the bride and her female family members with intricate and lovely designs, using thin wooden sticks – a labor of love that would take hours and painstaking effort to accomplish. Huge trays of traditional sweets known as mithai were also hand-delivered to the girl’s parents’ home by the bridegroom’s family, along with the trays of mehndi.

With time, this tradition, due to the rapid evolution of henna application procedures in the global fashion industry, has transformed into a more quick-fix kind of henna night convened a night or two before the wedding: hosting all the female relatives and friends of the bride, professional henna artists are summoned to apply beautiful henna designs on to the hands and feet of the bride and her guests.

The bride-to-be usually wears a green-colored embellished shalwar kameez or lehenga dress (matching the color of the henna) along with flower jewelry on her wrists, earlobes, and forehead, her face going makeup free. She keeps her head covered, with an additional veil sometimes drawn over her face, and sits demurely in a corner.

Flowers abound in and around the festively decorated residences of the parents of both the bride and groom throughout the week, which are also adorned with stringed fairy lights draped on its walls and gardens.

Decades ago, it was the norm for the bridegroom to wear a veil of flowers around his head to cover his face completely when he went to the bride’s house to pick her up on the night of the wedding.

The procession that went to pick her up, comprising of the groom, his family and companions was called the “baraat”. The bridegroom’s nephew, a young boy, would be dressed in exactly the same clothes as him in the baraat, and would be called his “shah baala” (best man). It was also traditional for the bridegroom to wear a high-collared, full-sleeved, formal tunic called “sherwani” over his shalwar kameez, a turban on his head, and decoratively embroidered shoes called khussa’s on his feet to complete the look.

Before going off to the bride’s home, the groom’s close relatives would get together at his parents’ house and help him tie the flower veil called “sehra” on his head. This ceremony was called “sehra bundi” (“tying the sehra” in Urdu).

Today, while hardly any bridegroom willingly wears the sehra on his face, the rest of the traditional attire, comprising of an ornate formal sherwani, turban, and khussa’s, is still worn by most bridegrooms. His neck is draped with heavy flower wreaths/garlands once he has arrived.

Once the bridegroom arrives to pick up his bride, the Islamic nikah having been convened earlier at the masjid, usually the same day, he is presented with gifts and money from the close relatives of the bride. This is known as “salami”. 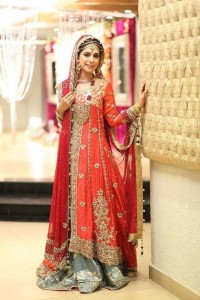 Pakistani brides are some of the most beautifully dressed in the world!

, which are exquisitely adorned with a myriad of threads and beads, her dupatta draped over her head, and traditional jewelry such as theteeka, jhoomar, and maatha putti ornamenting her coiffed hair, in addition to necklaces, bangles, rings and large earrings. Pakistani brides are some of the most beautifully dressed in the world!

On the wedding night or the next day, the bridegroom presents his wife with a special gift, which is called “moon dikhai”. Usually, it is jewelry, mostly an exquisite family heirloom, which she can opt to wear on the subsequent walimah ceremony, which is a large dinner party hosted by the bridegroom’s parents, usually in a marquee.

After arriving at his house after the wedding, the bride and groom proceed to share a glass or bowl of sweet milk or a milky dessert such as kheer (both of them have to partake from the same vessel). Some couples also cut an elaborate wedding cake at this point, amidst his close family members, before retiring to their bedroom amidst their dua’s, gifts, and blessings.

The bedroom of the bride and groom has already been meticulously decorated with stringed flowers especially for this night, after previously undergoing extensive remodeling with new paint, furniture, and fittings.

The bride is presented with an elaborate trousseau prepared by her mother-in-law, known as the “bury”, which comprises of about a dozen embellished formal dresses along with matching shoes and accessories. These dresses are placed in her cupboard, and she is expected to wear them to the formal dinner parties hosted for the couple by their close family members in the subsequent weeks.

In Pakistani weddings, it is traditionally customary for the couple to receive gifts of cash from attendees and guests. The bride is also gifted formal jewelry by her close relatives.

All Muslims, whether they are religiously practicing or not, adapt the above customs and traditions according to their preferences.

For example, practicing Muslims gender-segregate all the parties, remove all music besides the duff, and commence the festivities with an Islamic lecture (dars) given by a scholar or imam. The groom gifts the moon dikhai to his bride with the intention of it being her mahr – the obligatory dower prescribed in shari’ah. Extravagance and showing off is shunned to keep things moderate.