Muslim & non-Muslim African-American celebrities from different fields summing up their experiences being of a black color in this country.

♦ 1-“You can’t have capitalism without racism.”  Malcolm X

♦2- “Concerning non-violence: it is criminal to teach a man not to defend himself when he is the constant victim of brutal attacks.”  Malcolm X

♦4-” Excellence is the best deterrent to racism or sexism.” Oprah Winfrey

♦5- “In this country American means white. Everybody else has to hyphenate.”  Toni Morrison

♦6- “I always looked upon the acts of racist exclusion, or insult, as pitiable, for the other person. I never absorbed that. 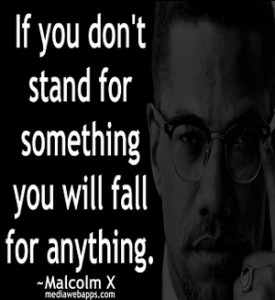 I always thought that there was something deficient about such people. ” Toni Morrison

♦7- “I swear to the Lord, I still can’t see, Why Democracy means, Everybody but me.” Langston Hughes

♦8- “Now I had won the gold medal. But it didn’t mean anything, because I didn’t have the right color skin.”  Muhammad Ali Clay

♦9- “Hating people because of their color is wrong. And it doesn’t matter which color does the hating. It’s just plain wrong.”  Muhammad Ali Clay

♦10- “To cheapen the lives of any group of men, cheapens the lives of all men, even our own. This is a law of human psychology, or human nature. And it will not be repealed by our wishes, nor will it be merciful to our blindness.” William Pickens

♦11-“American history is longer, larger, more various, more beautiful, and more terrible than anything anyone has ever said about it.”James A. Baldwin

♦12- “To be a Negro in this country and to be relatively conscious is to be in a rage almost all the time.” James A. Baldwin

♦14- “Maybe it’s time to just scrap the word ‘racist.’ Find something new. Like Racial Disorder Syndrome. And we could have different categories for sufferers of this syndrome: mild, medium, and acute.” Chimamanda Ngozi Adichie

♦15- “The Black female is assaulted in her tender years by all those common forces of nature at the same time she is caught in the tripartite crossfire of masculine prejudice, white illogical hate and Black lack of power. The fact that the adult American Negro female emerges a formidable character is often met with amazement, distaste and even belligerence. It is seldom accepted as an inevitable outcome of the struggle won by survivors and deserves respect if not enthusiastic admiration.” Maya Angelou