aaa
Q Hello. My name is Mark, and I am a Jamaican Christian man in love with a Bosnian Muslim woman. We both live in Canada. We have always been best friends but wanted to be more than that. We both finished school this year and decided to make things official. Together we seem perfect; she accepted me and I accepted her. Our relationship has always been on a more intellectual level; therefore, we talked about our differences and ended up embracing them. We have both received backlash from our families. While I was able to convince my family that this was not going to change, her family almost fell apart over this, and her father has decided not to let her out of the house and made her sever all contact with me. We still love each other, and we both think we could have a future together. We still talk every day and she wants us to wait maybe a year until she can gain independence from her father. I love her enough to wait. What do you think of our situation? She and I are very idealistic and open-minded, but we are also very young. Is it possible to keep this relationship, or do Christians and Muslims just not mix?

The counselor advises the brother to follow this woman’s lead and wait for a year to see how things unfold. She further encourages him to learn about Islam and also to, first and foremost, focus on his studies and work.

Peace and blessing to you dear brother,

Thank you so very much for writing in with this issue. Yes, your heart is young, and I can feel how painful this situation must be for you. Before I provide you with my own perspective on this issue, I want to describe the limitations of my response.

It is very important to understand that as we progress on our spiritual journey, you may find yourself facing what appear to be paradoxes on the surface. A “Religious Ideology” is usually expressed on several different levels including a culturally prescribed “way of life”, theories, a guidance describing how one would best relate to the world around him/her or laws that govern the social system of the group of people that belong to the religious order. Let alone the variety of denominations and sects within the religion which interpret all of the former a bit differently.

Both Christianity and Islam have a very large number of denominations and sects within those denominations, each subscribing to a wide range of interpretations of the Bible, New Testament, and Quran. The level of strict adherence to a group’s (family’s, clan’s, etc.) interpretation of what is acceptable and what is not acceptable differs from sect to sect and clan to clan.

With that said, we must be respectful of the people (family, clan, etc.) whom we are choosing to interact with. There is, indeed, a Divine Plan in this world of chaos that we live in, and yes, patience is the best option at this time. We do not know how or when conditions will change, but it is Allah/God that creates conditions, and it is Him that changes conditions always for a higher purpose than we can comprehend.

I am a psychologist who provides psychological and spiritual consultation. This means that I do not provide religious guidance but attempt to facilitate the process of finding your own guidance within yourself. I have a firm personal premise that if you can achieve this in purity and authentically, Allah/God will guide you according to His will.

With that said, I cannot provide you the same guidance that you might receive from a sheik or a scholar of Islamic jurisprudence. I am sincerely not sure what the rule of Shari’ah is regarding a woman choosing to marry a man who is not a Muslim. I do not know what a scholar of Islamic jurisprudence would say on this matter, but I do have a good amount of experience with a variety of cultures and the customs that are important to those cultures.

It is very likely that the woman you are interested in lives within a family system that adheres to a culture that holds dear the idea of remaining true to their ways which likely include the practice of Islam. This woman’s family might be afraid that their daughter may forget her faith and customs and the teachings of Islam if she marries into another culture that teaches a different practice. It is clear by her father’s behavior that this is a very important issue to her family.

As a psychologist, I am somewhat of an “odd duck” within the Islamic community. I can easily see a family that puts Allah (swt) first and foremost, follows the laws of Allah (swt), and also honors the cultures of the people in the new “clan” as long as idolatry is not committed. My intuition is that the biggest barrier you are going to experience is that of theology. 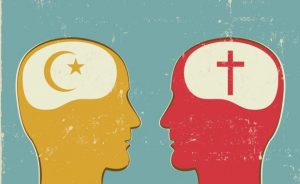 Islam acknowledges all previous prophets, known and unknown. Islam recognizes ‘Isa (Jesus) as a prophet (PBUH), but not as a “god”. Whereas Christianity, which emerged sometime after the death of Jesus (PBUH), while living in Rome morphed the teachings of the House of Judah to those who were from that House with the teachings of the more politically powerful cults/religions of Rome. ‘Isa (PBUH) was a descendant of the House of Judah and taught his people to “repent” and to return to their original faith. Many Romans were also converted to this faith, which was the faith of Abraham, (the same faith shared by the two sons of Abraham). Over time, as a result of the politics of the time, which I will not explain in this response due to time constraints, the “House of Rome” and a portion of those who were active in this “new” movement morphed into a new religion. The “House of Rome” worshiped idols, had many “gods” and had many stories that evolved from the old religions from Egypt and Babylonia (to mention only a portion).

From where I am sitting, the argument is really about one’s ability to perceive the difference between “God in man” and “Man as God”. Once you believe that a man is God, you cross over into worshiping a man and not Allah/God.

In addition to idols and worshiping men as gods, there was a serious argument about whether there are multiple gods or if there is only One God. The House of Judea, (one of many streams of the decedents of Abraham) held the belief that they have one God and that God is one. Likewise, the stream of the decedents of Abraham, who became unified under Prophet Mohammad (saw), do not believe that men are gods, and refuse to worship a man and adhere to the faith and understanding that Allah (swt) is One, and there is only Allah (=one, unique God). Thus, the main difference between most modern Christian theologies and Islam is about whether Jesus was a prophet (a man) or a god that should be worshiped.

Yet, there are Christians of some persuasions who will tell you that Jesus is not a god to be worshiped. Their theology is trying to describe how the “breath of God” was strong in him, and that he said to his followers, “be ye perfect as I am also perfect” etc. So, among Christians, there is a wide variety of interpretations of the New Testament and of Christians Theology. Likewise, this is also true of Muslims.

The main reason I provided you with this little “history lesson” is that I believe that it is in the area of theology that distinguishes between Jesus being a God, or a man, that most Christians and Muslims have difficulty reconciling. The other area, but likely to a lesser degree, will be the interpretations of prophecies of end times which I do not have space to elaborate on here.

Given your current conditions, I would follow this woman’s lead and wait for a year to see how things unfold. I would also learn everything that you can about her Muslim faith.

My thoughts about this are twofold. First, you are very young, and your focus should be on your studies and your work, and not on woman at this time. We live in a world that is changing very fast, and young marriages are often not sustainable in modern societies as it takes many years to gain the marketable skills needed for basic survival. So, shift your focus from marriage and women, and complete some college courses and gain marketable skills.

Second, learning about Islam and about this woman’s culture will expand your understanding of the world. I recommend that people from all faiths learn about the other faiths among us in a world where we must move toward peace, collaboration, and cooperation.

By taking your focus off of your desire to marry this woman, you shift your will away from wanting to “have things your way” to submission to the will of God. By waiting and being patient through this year, you will accomplish three things; first, you will have taken the time to learn and to “tune in” to answer for yourself about what the will of God is for you”. Secondly, you will be in a stronger position as you will have established yourself more firmly in the world by gaining/strengthening your marketable skills. Thirdly, you will have opened a door through which Allah/God can change conditions in hearts, minds, and circumstances.

I hope it helps,