aaa
Q As-Salamu Alaykum. I recently witnessed something horrible and close to zina. It isn't me, it's my sister. I've always known she was beautiful and she tends to use her beauty in a bad way. She taunts boys and teases them into wanting her ever more. She wears tight jeans that show her figure and sometimes shows her hair. I also know she spends her time talking to boys all night. Subhanallah, yesterday I came from Qur’an school and saw my sister in my room in tears. She had puffy eyes and her face was red. I asked what bothered her and she lied saying it was just her daily girl cramps and I believed it. Until today I am using her phone and went through her pictures. Subhanallah, a boy made an Instagram account just for her and named it "Dedicated to F. because she is a bitch." And he posted pictures of her half naked while kissing them. I remembered she was crying the other day and instantly knew it was because of this. I don't care about our reputation and if anyone thinks of my family and sister differently; I just care about her. I know how these kinds of problems go. Girls send pictures of themselves to guys they think they love and when they get angry at each other, the pictures are used against them and the girls began to either physically harm themselves or commit suicide. Please remember that I am 16 and my sister is 24. I and my family have always been reminding her to be good, but she gets angry when we do. She says she's old enough to make her own choices and as you can see, she did. She hasn't told anyone yet and I guess she won't. I fear that one day I wake up to find out that she committed suicide. Subhanallah, what should I do now? Please reply as soon as a possible.

Thank you for writing. I am so sorry to hear about what happened to your sister. I understand your pain, hurt, and concern.

Unfortunately, what happened to your sister happens to many girls. You are very aware of this I can see from your writing and your summary about what happens sometimes when you share pictures on the internet. You are a very bright and pious young lady. May Allah (swt) bless you for your efforts and your concern for your sister.

One thing I would like to stress is that this is usually not the situation wherein girls commit suicide unless there is some precipitating issue such as existing deep depression, abuse or bullying, or other underlying factors. As horrible as this situation is, and as vile and obscene as it ended up, it will pass, and in sha’ Allah your sister has learned the lesson.

Islam is our way of life. It is prescribed in the manner that it is to avoid terrible things such as this. If we follow the teachings of Islam, Islam protects us. You already know this, but your sister has decided to try a new path with disastrous results.

However, things could have been worse, sister, much more serious things such as pregnancy, an STD, abuse, evening running off with a boy, etc. While I am not diminishing the humiliation and pain she (and you) feel right now, I am asking you to put it in perspective.

In order to do that, I wanted to illustrate what “could” have happened. In sha’ Allah, your sister can use this experience to realize that she is on the wrong path and will repent and return to Allah (swt) and start again to follow the ways of Islam. Sometimes, it takes an experience like this to shock some people back to the reality of what they did leave behind.

Additionally, your sister is at the life stage in which Erikson terms Intimacy versus Isolation. According to Erikson, if one is unsuccessful at forging these bonds, it can lead to isolation, promiscuity, or exclusion. In this stage of life, people are forming their identities as young adults; they look for intimacy (closeness) with friends and often look for romance (love). 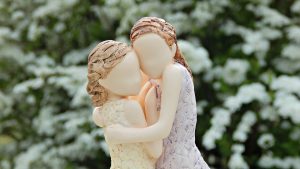 “Let her know that you still love, respect, and look up to her. “

This is also a period of time wherein people seek their independence. Some may leave the ways in which they were raised to try new things (as your sister did). These actions are part of one’s way to find themselves amidst rules, morals and cultural norms one was raised with, as well as exert their power to choose things as adults.

Additionally, as you live in the USA, there are many influences in the society that make it difficult sometimes to stay on the right path. Young adults often want to fit in. They may feel a sense of isolation, loneliness, or even rejection if they don’t “follow the norm” of a given society. They often think that they are “missing out” until they find out, usually in a hard way, that this isn’t the case.

While you did not say how long your sister has been engaging in this behavior, the point now in sha’ Allah is to create a non-judgmental space where she feels safe to talk, open up and express her feelings. As you are her sister, she will probably open up to you first, in sha’ Allah. If she doesn’t, maybe you can approach her and tell her that you love her and share your sorry about what happened and how can you help.

As you want her to trust you and feel that you are there for her, I would suggest you approach her with support and not blame. Eventually, let her know that everyone makes mistakes. It is not the end of the world (though the shame and hurt feel like it). Let her know that you still love, respect, and look up to her. This may make her think twice about her actions when she realizes that her younger sister loves her, respects her, and looks to her for guidance.

Often in the early 20’s, young adults get so preoccupied with what they are doing. Sometimes, they overlook the fact that their younger siblings may be looking to them for guidance. This fact alone has “woken up” many people who have gone astray.

The healing process may take some time. She needs to acknowledge that she is an adult and she does need to make her way in this world, yet in the right way.

There are steps to go through towards reconciliation with the family, too. I would also suggest that at a later point, when the hurt and pain of this terrible incidence has simmered down and trust and communication are open, you encourage her to repent to Allah (swt) for her sins and in sha’ Allah return to the ways of Islam.

In sha’ Allah, when she returns to Allah (swt) and Islam, she would be best advised to get married. At this age (and even younger), people start to desire the love, affection, and companionship of the opposite sex. This is probably what got your sister in this position in the first place. Sadly, she had to learn the hard way, but in sha’ Allah she will learn from this experience to come back to Islam, repent to Allah (swt) and be a better Muslim than she was before.

A good illustration of how we are to treat Muslims who have gone astray is conveyed in the following verse:

Aboutislam scholar says in regards to it: “In his well-known book, Al-Jami` li Ahkam Al-Quran, imam Al-Qurtubi says, this Quranic verse (An-Nahl 16:125) was revealed in Makkah. Allah instructs His Prophet [and callers to Islam as well] to call to the Divine religion and message by means of kindness and leniency, away from harshness and sternness. This way, Muslims should be preached and invited to the straight path until the Day of Judgment…It, thus, applies to preaching sinful Muslims… And, it is applicable to preaching disbelievers too. (Al-Qurtubi, Al-Jami` li Ahkam Al-Quran, 10:200)”

So, keep her in your prayers, sister, and make special du’aa’ that she sees the errors of her ways and uses this experience as a learning tool rather than go the other way. It is my feeling in sha’ Allah that this experience will bring her back into the folds of Islam as a stronger and more pious Muslim.

As you are concerned about suicide, WebMD has outlined the risk factors which are: “Adverse or traumatic life events in combination with other risk factors, such as clinical depression, may lead to suicide. But suicide and suicidal behavior are never normal responses to stress. Other risk factors for suicide include: one or more prior suicide attempts the family history of mental disorder or substance abuse family history of suicide, family violence, physical or sexual abuse, keeping firearms in the home, chronic physical illness including chronic pain, incarceration, exposure to the suicidal behavior of others.

The symptoms to watch for are: always talking or thinking about death and clinical depression that is deep sadness, loss of interest, trouble sleeping and eating. That gets worse when having a “death wish” – a tempting fate by taking risks that could lead to death such as driving fast or running red lights. Other symptoms are losing interest in things one used to care about; making comments about being hopeless, helpless, or worthless; putting affairs in order; tying up loose ends; changing a will; saying things like “it would be better if I wasn’t here” or “I want out”; sudden, unexpected switch from being very sad to being very calm or appearing to be happy; talking about suicide or killing one’s self; visiting or calling people to say goodbye.”

If you feel that there is a real chance she is suicidal, inform your parents and either you or they can call the suicide hotline at 1-800-273-TALK.

Sister, I have included some links below for further assistance. Please let us know how things turn out and do contact us again if you need further guidance. You, your sister and your family are in our prayers.