aaa
Q Assalamulaikum, I've been married for 18 months now. About 3 months ago, I came to know that my wife had an affair prior to marriage and that she has been talking to her ex-boyfriend even after marriage. I got recording of her calls with his boyfriend accidentally and listened to them. In most of the calls, she was talking to him casually. She was talking bad about me although I've been good to her. She was also talking bad about my parents and family in the calls. I also got recording of calls with her family where her family was also using very bad words about me and my parents. As soon as I learnt this, I wanted to separate and hence I got 2 representatives from local Jamaath involved. This is first time my local Jamaath is advising me to reconcile and give another chance. She feels sorry for what she did. But my parents are against this advice and want me to divorce my wife as she had not been doing well in household matters and was warned my parents couple of times already. My parents are very hurt after listening to the recordings of my wife and her family talking bad words about me and my parents. Also, we came to know about my wife's family moral background that is not good. Therefore, my parents don't want to give her another chance as my wife may commit same mistake again. I'm confused now as to what to do. Shall I divorce my wife as per my parent’s words or shall I listen to representatives of Jamaath? If I listen to Jamaath and reconcile, I'll feel like I am betraying my parents as I'll be living a life with a lady who spoke very bad words about my family (along with her family). If I consider what Islam teaches, I feel I've to give one chance to my wife as she has just spoke to his boyfriend casually but has not been involved in any adultery. I need to add also that her family believes in witchcraft and my wife also supports it whenever it's followed by her parents. Also, her father is a drunkard and doesn't pray or follow any other fard of Islam. Please help me or guide me as to how if I should divorce my wife or should I give her a chance. Thanks.

“As a last resort before contemplating divorce, it might be a good idea to seek counselling, ideally with both families present. It is advisable also for you and your wife to attend couple counselling, but since the influence of your families will also be there, it may be more helpful to have both families present. This way, you can all raise your concerns together in an environment that will be under the guidance of impartial parties.”

Surely, it is a difficult situation to be in when your wife seems to be involved in so many things against you and your family. She was talking to an old boyfriend as well as saying bad words about both you and your family behind your back. Naturally, on hearing this, your family would rather see you seeking divorce as they feel very insulted. Furthermore, they probably fear for the health of your marriage and would rather see you leave it.

Certainly, having the support of your family will make the marriage easier, but it can still work without their support. Having sought the support from your local Muslim leaders, it seems that they are also of the view that you should give the marriage another chance before ultimately taking a divorce.

Due to the length to which marriage is respected in Islam, it is always encouraged that we do all we can to have a marriage before seeking a divorce as a last resort. There is much wisdom behind this given that marriage provides comfort to the couple, serves as a means to have needs met in a halal way, and saves us from falling into sin.

However, you have since shared further undesirable features of your spouse and her family – their belief in witchcraft and her father’s alcoholism and not offering prayer. Furthermore, you state that she abuses your parents.

With specific reference to the new information you have shared, regarding her parents’ beliefs and behaviors, it is concerning, but whilst we ideally want to marry spouses from good, righteous backgrounds, this does not always happen. Ideally, we would all marry people from good backgrounds, but it’s possible to also be in a successful marriage with someone who has come from a dysfunctional background too. Just because her father is a drunkard who doesn’t pray, it does not mean that this is who she will also become.

In fact, as her spouse, you are in a good position to ensure a secure marital home that will not place her in such a position where she feels the need to turn to such. Likewise, with belief in witchcraft, helping to educate her on the impermissibility of its use can provide her with a strong and positive influence on the straight path. Arguing with her about it may cause her to be more inclined to go to her parents who may influence her wrongly when it comes to witchcraft. Certainly, in Islam, we know that witchcraft does exist, but the important thing is that we use this knowledge wisely by not using it and protecting ourselves against it. As her husband, you could have a profoundly positive influence in turning her away from it.

Regarding her abusing your parents, this is not acceptable as much as would be her abusing her own parents. It sounds generally like there are many differences between your two families which make it very difficult to move forward or even give the marriage a chance at working since the influence of both families is so strong.

As a last resort before contemplating divorce, it might be a good idea to seek counselling, ideally with both families present. It is advisable also for you and your wife to attend couple counselling, but since the influence of your families will also be there, it may be more helpful to have both families present. This way, you can all raise your concerns together in an environment that will be under the guidance of impartial parties.

If this counselling is sought within your local community headed by the local imam, then you can be sure that the advice you will receive will be undertaken under the guidance of Islamic principles. This will be best for all parties involved. Since your local leaders advised you to take the route of giving things another go first before moving forward with a divorce, they will be well versed on your scenario as well as content that you took their advice to give things another go. At least this way, if you do still fail to make amends, then they have seen with their own eyes that you have tries your best to make it work.

Seeking counselling in this way will give everybody involved the chance to have their voices heard and express their concerns. All this can be done without words being said behind one another’s back. This will allow everyone to express their opinions without facing the dangers of backbiting.

If after the counselling you are still unable to reconcile relations with your wife, then you can be confident that you have done all you can to make things work and will not look back with regrets that you didn’t at least give it a go. Alternatively, in the best case scenario, the counselling will work, you will reconcile your differences and your families will have also made for a better environment to nurture a marital relationship.

May Allah grant you ease during these difficulties and guide you to make the best decision that will be pleasing to Allah and bring you much happiness. 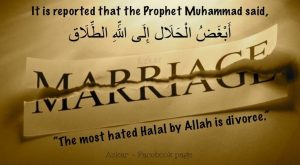 Why Are People Getting Divorced Quickly Nowadays? 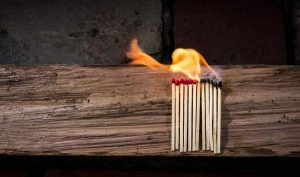