"Gender Identity Disorder is one such 20th century illness that has come about as a product of neglect or serious conditional love whilst growing up."
aaa
Q I am in love with a woman. She is my age, and whenever I see her, I have the feelings I have never had before for anyone else. I think about her a lot. We have even got together and acted on our emotions. However, I feel very uneasy about it. I am from a respected family and want to have a family and live a normal life. I don't know if I should be with this woman and feel guilty because of my culture and religion, or should I get married to a man and then again I may not be honest with him. Besides, I am really afraid of getting married and then not being virgin because I have been really intimate with this girl I love dearly.

Thank you for sharing with us your problem.

Love is a precious medium that has been given to us as human beings through which many of the lessons we are to learn in order to become better human beings are transferred. Through love, we learn compassion, understanding, self-sacrifice, loyalty, trust, responsibility, and commitment. This, of course, is not an exhaustive list of attributes, but they are the fundamental components of what it is to be a human being on a higher level. This higher level is selfless; it is through which all humanity benefits like dropping a pebble into a pond and watching the ripples spread out. This unconditional love comes to us through our parents, and as we grow in that love, we learn to know who we are, about our relationship to others and to our Creator, and we learn to find our way in the world. However, this love not being transferred to us as children from our parents (intentionally or unintentionally) can have many repercussions.

The same-sex relation is more common among males than it is amongst females because the nature of their relationship to their own fathers was dysfunctional. Probably, the reason why this happens less with women, although it is increasing, is because by nature, women are more giving and more compassionate whether they be mothers or not. However, as you have shown, it does happen with women. There are many arguments around lesbianism, and the most common one is about whether it is genetic or a disease. But are we supposed to live with disease as a permanent factor of our respective lives?

There are “Human violations of laws of nature resulting in contamination of the environment which, in turn, places increased stress on the ability of the individual to function”.

“Mankind has gradually lost the inner awareness which would have enabled correct perception of the laws of nature that must have be respected.” (George Vithoulkas)

As human beings who are one of God’s creations, we physiologically come under those laws of nature. When as parents we do not help to fulfill those laws, we become subject to a state of disease, and that disease becomes transferred to our children – the result of which depends on the mental and emotional susceptibility of the child. A good, but extreme example of this is the case of feral children. There are many feral children living in the 21st century; they have been raised without basic self-survival skills, care, love, nurturing, and tarbi’ah (emotional, social and intellectual training); therefore, they are unable to feed and clothe themselves, learn, relate to others, or socially function simply because they have never been taught! 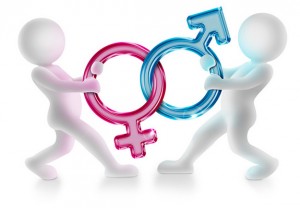 Gender Identity Disorder is one such 20th century illness that has come about as a product of neglect or serious conditional love whilst growing up. A woman, who becomes bitchy and mean, is self-interested or is interested in the needs of her family, but this doesn’t make her any less at disease. In fact, it makes her more able to pass on the disease in the way she nurses her children as a selfish and self-interested mother who is losing the ability to be a good mother. From mother-to-daughter-to-granddaughter a miasm (a person’s inherited disease group) develops, sets up patterns of a deep emotional and psychological imbalance as genetic imprints which sets up patterns for a potential disease known as “miasms”. No wonder that Paradise is at the feet of the mothers!

As humans, we need love, and we will take love from wherever we can get, especially when we have not had the “right” kind of love in our lives as children. Again: because women by nature are more giving and more compassionate, they will reach out for that love from other women being unaware that this need is a result of what was lacking from their growing years as a child.

From a Research on Female Homosexuality (courtesy of NARTH)

“… to the very young child, the parent is his or her source of beings, and so one’s very being is felt to be endangered if the attachment to the parent is disrupted.”

“…one constant underlying principle suggests itself from amidst a welter of details: that the homosexual – whether man or woman- had suffered from some deficit in the relations with the parent of the same sex: and that there is a corresponding drive to make good this deficit, through the medium of same-sex or homosexual relationships.”

Factors that influence same-sec attraction in females are:

Sister, I do not know if this helps you to understand better your situation, or why you feel what you feel for this person who may serve as a needed female role model. However, the guilt that you have been feeling may not be simply religious or cultural. You need to give yourself as much emotional and psychological space as possible to ascertain what is really going on inside you, and where it comes from before acting on those feelings. This other female may feel free to act as she does because she is sure in her own mind that she is a lesbian, but this does not necessarily explain why you feel what you do. At the same time, there are lesbians who set out to “make” others lesbian so that they can feel comfortable with their decided “identity”.

The fact that you fear getting married might be your starting point towards unraveling what led you to this path. Due to our busy life, we often do not allow much room for contemplation, so I would strongly suggest that you keep a diary to record your thoughts and experiences in order to help observing yourself and to see what is really going on. Keeping a diary in this manner is a useful tool for self-healing and self-understanding. In addition, keep up your prayers, and make regular du`aa for Allah’s guidance, so that your heart does not become sealed.

May Allah help you,