“It is most likely that the developmental changes that your son is going through are having some dramatic effects on him. Trust Allah and do not worry; in sha’ Allah your son is going through normal changes that just require exploring different approaches to adjust. I’m sure there is nothing seriously wrong with your son, and through a holistic approach that includes spiritual, health, and mental discipline and remedies, you will be able to help him. Seek the help of medical, health, and spiritual expertise as a follow-up and ask Allah for guidance on the matter.”

Your son’s physical maturity may have something to do with his difficulties in controlling his anger due to the hormonal changes that typically occur at this stage in life. Especially since your son seems to be maturing faster than other kids his age, perhaps he is experiencing a more intense combination of physical, psychological, and mental changes than others, and as such, it is affecting his mood and personality. I’m not aware of what your son’s history is in regard to his ability to concentrate and his attention span in general, but it is possible that this too could be influenced by the changes he is undergoing.

As this is an important issue dealing with physical health, I think you might benefit by seeing a doctor with your son, at least to better understand how your son’s biological changes might be impacting his mental and psychological states. I would recommend, if possible, avoiding the use of drugs such as Ritalin, however, to help your son with his attention span. Drugs of that nature should be a last resort only. Rather, I would start by focusing on his diet and his spiritual and religious activities.

First off, try your best to see that he minimizes his sugar intake to a bare minimum if possible. Sugar in large quantities is very detrimental to one’s attention span and concentration, particularly in children. There are many recent cases in the West of schools being forced to remove soda and candy machines from their premises after complaints from parents and teachers that the sugar intake by the students was having a negative impact on the students’ behavior and performance in school, along with the fact that it is just generally unhealthy.

Perhaps, with your son’s size and maturity, it would also be helpful to cut down on red meat somewhat though I’m unaware of how much he eats at the present time. Red meat has a heat-producing effect on the body which can increase one’s temper or anger levels.

As I am not a nutritionist, I can only give you some ideas. I know from growing up with a hypoglycemic mother, however, that so much can be done from a health and nutrition perspective in regard to addressing the types of 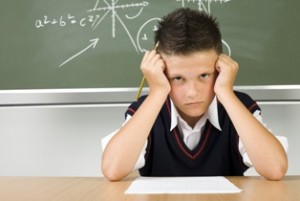 problems your son is having. I would encourage you to seek the help of a nutritionist also to get some ideas of what can be done from a dietary perspective to help your son improve his concentration levels and reduce his anger.

Spiritually speaking, much can be done in terms of controlling anger through worship, particularly dhikr (remembrance of Allah). Of course, there is the guidance from Allah and His Messenger about the importance of controlling one’s anger, such as the Prophet’s words.

Abu Hurairah reported: I heard Allah’s Messenger (may peace be upon him) as saying, “One is not strong because of one’s wrestling skillfully.”They said, “Allah’s Messenger, then who is strong?” He said, “He who controls his anger when he is in a fit of rage.” (Muslim 32 #6314)

Also, it is always good to keep one’s wudu’(ablution) as often as possible and to remake it when one breaks it. Of course, reciting and reflecting on the Qur’an are also very important on a regular basis. At your son’s age, it would be helpful if there was someone to teach him and answer his questions (either in a class setting or one-on-one) when reading the Qur’an to facilitate understanding and relevance to his life as a 12-year-old.

It is most likely that the developmental changes that your son is going through are having some dramatic effects on him. Trust Allah and do not worry; in sha’ Allah your son is going through normal changes that just require exploring different approaches to adjust. I’m sure there is nothing seriously wrong with your son, and through a holistic approach that includes spiritual, health, and mental discipline and remedies, you will be able to help him. Seek the help of medical, health, and spiritual expertise as a follow-up and ask Allah for guidance on the matter.

One final thought. I noticed in your profile that you and your husband are divorced. I have no idea of the circumstances of the family and the divorce itself, but it is possible that your son could also have been affected psychologically by the divorce and by not having his father around (assuming he’s not). Again, since I know nothing of the circumstances of this matter, it might also be something to explore, as perhaps your son’s anger is in some way linked to frustration or pain over the divorce and the breakup of the family.

My Son Doesn’t Understand the World

I Read My Son’s Diary