aaa
Q Salam walaikum. Family have been telling me to tell my son about his father when he turns around 10. He is now 6 years old. Im divorced and am a single mother. My ex husband left me and my son as soon as he recieved his legality to remain in the UK. My son was 1 at that time. My ex husband put me in shame by telling everyone that my son is not his son so in order to prove that he made me do a DNA test.

The DNA test results came to show that he is the biological father. After recieveing proof he has not been in contact at all in the last 4 years. He doesnt want anything to do with my son. I have met someone now which my family knows about and in sha Allah hoping to get married next year. Alhamdulillah he is really nice to my son and is ready to accept him as his own. He is amazing with him. But my question is should i tell my son who his real father is when he grows up? My fear is he might start disrespecting his step father. Please advise. Jazak Allah

“whether you chose to tell him sooner or later be prepared that he may start to act out and rebel so be prepared to support him emotionally in a sensitive way to protect him from this backlash. Let him know how much you and the whole family love him so that he will feel comforted and supported, especially when he may be feeling rejected if his father has no desire to have any part in his life. Take time to think about how it will all feel from his perspective and be sympathetic to him in this.”

This is understandably a difficult dilemma that you face, because as you are aware whatever choice you make could have serious consequences. Only Allah know what these consequences will be with whatever choice you chose to make, but by carefully exploring your options and the potential consequences you will be able to feel more confident that you are making the correct decision. This should all be done under the Guidance of Allah, so as you are thinking about these options do not forget to continually ask Allah to guide you to make the decision that will be best for your son and your family and will ultimately be most pleasing to Allah.

You should not be any rush to make such a big decision so take your time to think deeply about your options and their potential consequences whilst continuing to keep this decision in your prayers. Alhamdulilah that your family are also aware of your situation and therefore can provide you with useful advice too and will insha Allah support you with whatever you choose to do.

Check out this counseling video

So, to explore your 2 options; to tell him (and if so, when?), or not to tell him. You might write these things down, writing all your options down somewhere private and next to each writing the potential consequences (good and bad). Sometimes actually seeing it written down and being able to refer back to again and again can help. You can also physically see then which option clearly has a stronger argument. You might try Since your family are also aware of the situation, this is also something you could ask them to look at too because maybe they have thoughts and ideas that you did not think of.

Regarding matters that relate to actually telling him who his real father is. From an Islamic perspective we are always encouraged to be honest and truthful. There are times when it is acceptable to not tell the truth in order to protect someone or not hurt their feelings and maybe you feel like this is a situation where an exception could be made to protect your son and your family unit. Others would disagree and say that dishonesty in this situation would be unacceptable. This is something to give serious thought. Think back to examples in your past where you may have hidden the truth and how uncomfortable it felt and how sometimes this can be expressed outwardly as frustration or just not being yourself, or if you are able to hide it on the outside you probably felt very emotionally and psychologically uncomfortable (which can sometimes lead

Think back to examples in your past where you may have hidden the truth and how uncomfortable it felt and how sometimes this can be expressed outwardly as frustration or just not being yourself, or if you are able to hide it on the outside you probably felt very emotionally and psychologically uncomfortable (which can sometimes lead to physical side effects and consequences to relating to psychosomatic complaints relating to this suppressed stress). There may have also been occasions where you came forward to tell an uncomfortable truth and whilst there will have been consequences, it probably felt good to just be open and no that this is no hidden secret to be constantly covering up.

In further support of telling him also remember that your son has the right to know who his father is. You have probably on at least one occasion been asked by a doctor for your family history of certain medical conditions. This is so that they can be aware of any increased risks you have for certain disorders and can, therefore, pay attention to specific aspects of your health more carefully and know when to take certain symptoms more seriously (e.g. perhaps a family history of heart problems or certain types of cancer would alert doctors of any specific symptoms such as high blood pressure or pain in certain body parts that without a history of these conditions a doctor might not take so seriously). If your son believes his

If you then chose to go forward and tell him, then the question is when? You are the one who will be most aware of his maturity and how well he might handle such news. Telling him when he is younger will enable you to live comfortably knowing that everything is out in the open and you are not hiding any secrets from him. However, you express concerns that he might start to disrespect his step father in the knowledge that he is not his real father. This is where it is important to instill strong Islamic values in him from a young age so that he will know that he should treat all elders with respect regardless of whether he is his real father or not. 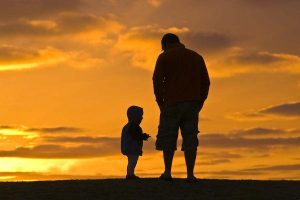 This is where age may be a factor. As a younger child he may not fully understand this concept, whereas, as he gets older, towards the age of 10 he will have a better idea of respect and why it’s important and will appreciate the fact that his step father has been treating him as his own all the while and will have an added appreciation and respect for this. However, to leave it this long, he may be angry at you for having hidden such a big thing from him for such a long time and may not be able to help himself from acting in a disrespectful manner to both of you.

However, at the same time, in time he may have developed such a strong bond with his stepfather, as if he is his real father that leaving it a bit longer before you reveal the truth to him will be a lot easier as he has such a strong bond that this respect towards his step-father will be so embedded that the news will be a lot easier for him to process. In the meantime, his real father may have a change of heart and come forward and wish to have an input in his son’s life, in which case again may result in some kind of conflict as his suddenly finds out the truth.

Another thing to think about is that whilst you and your future spouse get on well now, be aware of keeping this relationship halal until you get married so as not to displease Allah, only meeting with him with other people around and not alone together. Keep in mind that most couples will argue at some point, regardless of how much they try to stay strong in their relationship, and it would be devastating should he chose to blurt it out in anger sometime or say something that might cause your son to wonder.

Also, aside from his own attitude towards your son, how will his own family might be around your son? Will they treat him the same, or perhaps in a way that might cause him to start asking questions? Children are much more aware of their surroundings than we would realise as adults and will pick up on signs and behaviours that we might not even realise we are showing on the outside as much as we try to hide it.

Either way, whether you chose to tell him sooner or later be prepared that he may start to act out and rebel so be prepared to support him emotionally in a sensitive way to protect him from this backlash. Let him know how much you and the whole family love him so that he will feel comforted and supported, especially when he may be feeling rejected if his father has no desire to have any part in his life. Take time to think about how it will all feel from his perspective and be sympathetic to him in this.

Having said all this, it may be that you are able to live without him ever knowing who is real father is, especially if he stands by not wanting anything to do with your son. It may be that you will be able to live a happy family life with your new spouse and son, without your son having any hard feelings towards anyone in the belief that his step father is his real dad, without having to deal with any of the consequences that might arise out of telling him.

Indeed, this is a very difficult, but very important decision for you to make that could will have consequences whatever you should chose to do, so it is important to really take your time to think it all through. Share the task with your loved ones as they will also be a part of the process and managing whatever consequences come to pass. Throughout this process be strong in your prayers and continually ask Allah for his guidance in this important matter.

My Allah guide you to make the best choice that is pleasing to Him and will be best for you, your son and your wholes family.

Should Daughter Know Who is Her Biological Father?

A Father With a Colorful Past

My Parents’ Arguments Upset Me