aaa
Q Salam Aleikom sister. What do you think, can an Islamic school require its elementary school female students to wear a hijab as dress code when Islamically they might not be at the age when they are required to wear a hijab? As a mother, I think it is not a bad idea even if she has not started menstruating yet (which is when hijab is required for a Muslim woman) because it is a way to get used to the Islamic dress code. It is my duty as a parent to do everything for my child to learn the Islamic norms and etiquettes and be in an environment when she learns about her religion and is not bullied because of being a Muslim. On the other hand, obviously, I do not want to force this on her.

“While I am not an advocate to force a hijab on a child, I do feel there are ways to help them see the benefits in hijab even at a young age. The number one would be pleasing Allah and as she is a child, she needs to feel she will have some input into this new process of wearing a hijab daily. As stated, this may be in the form of her choosing a hijab she likes if possible. In this way, you are setting the rules for her to follow while at the same time giving her a sense of independence in choosing which may make the initial transition easier.”

Thank you for writing to us with your most important concern regarding your daughter and hijab. While you did not state her age but did indicate it is an Islamic elementary school, in sha’ Allah the age-related advises will be appropriate.

First of all, sister, as you do want your daughter to get a solid Islamic education as well as being around other Muslim girls whom she can learn and grow with, I admire and respect your choice to put your daughter in an Islamic school.  Insha’Allah, she will get a quality education, strengthen her Islamic knowledge through the years as well as find lasting friendships with the other little girls there.

Regarding hijab, sister, it really is up to the school whether or not they feel that the uniforms should include hijab. As each Islamic school may have different rules and criteria for dress uniform (as in Christian schools as well), it is up to you as the parent if you chose to abide by their rules regarding this or if you wish to take her elsewhere for her Islamic education.

However, please, do keep in mind that as an Islamic school, the missive is to not only educate but to prepare children for their future responsibilities. In this case, as your daughter is not of the age wherein it is mandatory that she wear hijab, you may want to view the school’s decision regarding this as “prepping”.

Check out this counseling video

During prepping a child is exposed to something that will be needed or useful for the future in the hopes that insha’Allah when the time comes, the child will be used to her/his new role or responsibility.  In this case, it is the hijab which is being introduced early and is made a requirement by the school.

Again, while I am not sure of the exact age of your child, you could explain to her that she will soon be required to wear a hijab anyhow. This is a chance to start wearing it among peers and feel comfortable and safe while experimenting with styles, fabrics, and colors that she likes (if the school allows it).  You may also want to encourage her to explore different types of hijab which may be appealing to her.  If she feels she has a choice in some of these things, she may be more compliant and even start to look forward to wearing hijab.

You may also want to ask her how would she feel when she does become of age and has to start wearing hijab. For instance, if she starts menstruating tomorrow or next week it would be mandatory. By learning about her feelings concerning hijab now and addressing them as needed, you can insha’Allah ward off future resistance from her when it is spiritually mandatory. You may want to discuss the significance of hijab in terms of her love and devotion to Allah, wanting to please Allah as well as her starting her journey as a young lady soon, with more responsibilities both spiritually and academically.

Has she worn hijab often before, sister? If not, in order to increase the joy of this experience for her, you may want to point out to her all of the cute little babies and young girls at the masjid, in the shopping places, etc. who are wearing hijab in order to give her a reference point. You may want to indicate that as part of her school code, she too will be wearing a hijab as she is nearing the age wherein young girls begin to mature.  You can also explain to her that mostly all schools have dress codes and her school’s dress code includes the hijab.

Help her to see that it is an honor to wear hijab. It is something special. You may also explain to her that all the other girls will be wearing hijab (like the ones she sees at the Masjid and in social settings) and that she will fit right in. To help her with this transition, you may wish to have her pick out a few that she likes and have her begin to wear them around the home as well as out in public. Of course, there is no need to force her at home as there is no compulsion in Islam. However, loving encouragement is indicated at this point.

Sister, as stated, schools have their own rules on dress codes -Islamic or other. Even some public schools in the US have rules on length of a dress, not showing tummy, not being too revealing etc. It makes sense that an Islamic school would choose to include the hijab in their uniform code.

While I am not an advocate to force a hijab on a child, I do feel there are ways to help them see the benefits in hijab even at a young age. The number one would be pleasing Allah and as she is a child, she needs to feel she will have some input into this new process of wearing a hijab daily. As stated, this may be in the form of her choosing a hijab she likes if possible. In this way, you are setting the rules for her to follow while at the same time giving her a sense of independence in choosing which may make the initial transition easier.

It is my feeling, sister, that once she starts going to school, make friends and sees that everyone else is wearing hijab, she will quickly adapt, in sha’ Allah. At this age especially, children want to fit in and it sounds like you made a good decision regarding “where” it is you want your daughter to fit in. Much respect for you, sister. We wish you all the best.

Please let us know how she makes out. 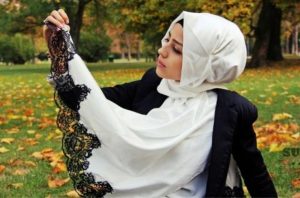 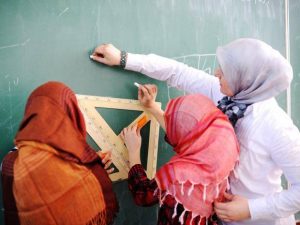 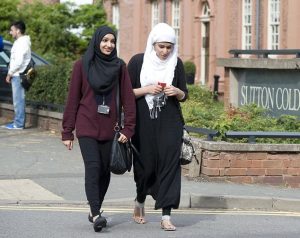