aaa
Q Nothing has caused me more ANGER, tears, and emotional upset since I have been introduced to Islam by my man, a practicing Muslim, than the FACT that I am, as a female, not welcome to pray behind him in the main Masjid. As per Quran, I am not prohibited to see the beauty of the real mosque as he does, but man-made rules exile me into a side room under the pretense of "privacy". To me that is clearly not an invitation and has been the main reason for me not to OPENLY convert to Islam. I am ASHAMED to claim Islam for that reason for I am clearly being discriminated. I told my man that I would never want my neighbors to see me in a Hijab for it does not symbolize freedom to me when I am being oppressed by not being allowed to pray in THREE MASJID. Have for over a year now tried to find a place to go to pray, learn, experience what my man experiences but all I have found so far is exclusion and this has caused us many verbal disagreements for I REFUSE to pray in a side room or convert to a way of life that shuns me in the most important aspect of all ...PRAYER!! May Allah deal with those that have transgressed in this way against their women.

Short Answer:  Allah in the Quran encourages both men and women to frequent the mosques without any discrimination and the Prophet is reported to have allowed women to pray in the mosque. Religion and its rules and principles are what are to be followed, not traditions and customs. Giving women an access to our mosques will make them feel welcomed, respected, and highly engaged in their communities.

It is a pity that you have the intention to convert to Islam but the issue of some people preventing women access to mosques is the reason for not taking the decision.

My personal advice for you is: take the decision and convert to Islam, and I assure you that there is a clarification for what causes your anger.

Converting to Islam will bring you inner peace and eternal happiness in this world and the world to come. By converting to Islam, you will discover the beauty of Islam and feel its uniqueness.

Mosques Are for Both Men and Women

In Islam, men and women are on equal footing.

Men and women are ordained to do the same acts of worship.

Men and women have the same rights and responsibilities.

Now we come to the issue of women’s access to mosques. Mosques in Islam are built for the purpose of being houses of worship of Allah. Allah is worshiped by both men and women.

Therefore, both men and women should have access to the houses of worship (i.e. mosques).

Evidence from the Quran

There are general instructions in the Quran that encourage both men and women to frequent the mosques without any discrimination. Read, for example:

The mosques of Allah are only to be maintained by those who believe in Allah and the Last Day and establish prayer and give zakah and do not fear except Allah, for it is expected that those will be of the [rightly] guided. (Quran 9:18)

O children of Adam, take your adornment at every mosque, and eat and drink, but be not excessive. Indeed, He likes not those who commit excess. (Quran 7:31)

Evidence from The Sunnah

The Prophet (peace be upon him) is reported to have allowed women to go mosques.

One of the wives of `Umar (`Atikah bint Zayd) used to offer the Fajr and the `Isha’ prayers in congregation in the Mosque. She was asked, “Why do you come out for the prayer though you know that `Umar dislikes it, and it makes him jealous.” She wondered, “Then, why does not he forbid me from doing that?” The answer was, “What prevents him from that is the statement of Allah’s Messenger (peace be upon him), ‘Do not stop Allah’s female slaves (women) from going to Allah’s Mosques.’” (Al-Bukhari)

Lady Aishah (may Allah be pleased with her) said that the believing women used to attend the Dawn (Fajr) prayer with the Prophet (peace be upon him).

They used to come wrapped up in their long garments and then they used to return to their homes after the prayer. No one could recognize them because of the darkness. (Al-Bukhari)

This is a general ruling on the issue of women’s access to mosques.

However, it is true that there are some opinions that suggest that women’s prayer at home is better than offering it at mosques.

These opinions do not contradict the original permissibility of women’s prayer at the mosque.

Rather, they are based on the principle of sad al-dhara’i` (blocking the means to evil) when women do not observe the proper dress and legal rules of going to mosques.

No, we come to the reality.

It is true that some mosques do not have a space for women. Even if there is a space, it is not properly accommodated in a way helps women maintain humility while offering the prayer.

So, the reality is painful.

In this case, there is a problem with understanding the objectives and rules of Islam. The theory is something and the practice is something else.

Muslim women are permitted to go to the mosque to offer the prayer, remember Allah, seek knowledge, introduce themselves to their community, etc. They should not be prevented from the role they are expected to play. Women are active members in the society.

The path to mosques should be facilitated and obstacles should be removed. Given this, women’s going to the mosque should not affect their roles at home.

Men and Women in the Masjid

When men and women are together in the mosque, then we should have first men’s lines behind the Imam, then children and then women.

This is the way Muslims used to pray behind the Prophet (peace and blessings be upon him).

He did not make or ask his Companions to have a curtain or wall between the lines of men and women. (See Al-Sindi’s Commentary on Sunan An-Nasa’i, p. 798)

It is not required to have a partition or a curtain between men and women in the mosque.

It stands to reason that partitions were introduced later in Islamic history because some women began going to mosques without observing proper Islamic dress.

Or perhaps, because of culture, some men wanted to discourage them from going to the mosques. 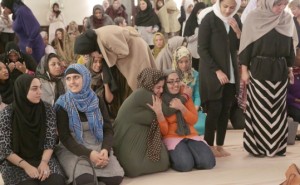 Some Muslim scholars hold the view that there is nothing wrong if a woman takes over the leadership of administrative and financial affairs and necessities of a mosque or to be a director of an Islamic Center.

Also Muslim scholars view that there is no reason to prevent non-Muslim women from visiting a mosque.

If you are interested in Islam, you are welcome to attend the mosque in your neighborhood as this might help you in a way to come closer to accepting Islam.

Always remember that one should not judge a book by its cover. Don’t judge Islam by the way that a few Muslims understand it.

Islam is very easy to embrace in your daily life. We have to differentiate between culture and religion.

Religion and its rules and principles are what are to be followed, not traditions and customs.

Giving women an access to our mosques will make them feel welcomed, respected, and highly engaged in their communities.

I hope I have answered your query.

Are Women Welcome in the Mosque?

No Room for Women at Mosques?