aaa
Q In today's modern world, most people are living on loans. Institutions who give out loans usually charge high interest rates and there doesn't seem to be a limit on how much interest they may charge; it could vary between 10% and 35% and even more. In many cases, borrowers will not be able to pay back their loans due to the high interest rate. This isn't seen as something immoral according to world standards, but according to Islam this is usury and it is prohibited. My question is since the world accepts this type of transaction, why is usury prohibited in Islam?

Thank you very much for this timely question, which touches upon a problem the whole world is suffering from nowadays.

The dangers of usury

We are going through this economic recession and the problems that it brings with it are being experienced all over the world. A big question is raised now more than anytime before about the dangers of usury. As well as the role it has played in leading the global economy to this state we are in today.

Islam has followed the practice of the monotheistic religions that banned usury and declared an open value-based war on it. In the Quran — which Muslims believe is the word of God — we read:

{O you who believe! Be careful of (your duty to) Allah and relinquish what remains (due) from usury, if you are believers. But if you do (it) not, then be apprised of war from Allah and His Messenger; and if you repent, then you shall have your capital; neither shall you make (the debtor) suffer loss, nor shall you be made to suffer loss.} (Al-Baqarah 2:278-279)

Why Is Usury Prohibited in Islam?

The Quran went ahead and gave a description of those who get themselves involved in usury-based transactions. It showed the psychological effect this will have on them, saying:

{Those who swallow down usury cannot arise except as one whom Satan has prostrated by (his) touch does rise. That is because they say, trading is only like usury; and Allah has allowed trading and forbidden usury. To whomsoever then the admonition has come from his Lord, then he desists, he shall have what has already passed, and his affair is in the hands of Allah; and whoever returns (to it) these are the inmates of the fire; they shall abide in it.} (Al-Baqarah 2:275)

The Quran warned those who get into usury that their life will be void of any blessing. But why is that? It is definitely due to the many dangers usury has upon economy, society, and individuals. In the coming few lines, I will be touching upon some of these dangers.

Usury inculcates man with corruption and takes him from the main objective of his existence and makes him a slave of money. It turns him from a human being into a money seeker who is blinded by money and for whom money is the most important thing in life.

In search of money, such a person will twist truths, violate morals, and destroy values. Usury breeds in the human stinginess and greed, two maladies that will lead to many other vices like cowardice, laziness, and other things. 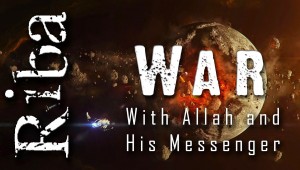 A person who deals with usury is very cowardly when it comes to money; he waits for his money to grow without doing any effort to deserve this.

He is a lazy person, as well as a non-productive member of the society.

In fact, he lives on the work of others and reaps the fruits of their efforts. These things will lead to a psychological disturbance and imbalance.

Further complications may include physical problems and ailments. When the Quran described such a person by saying that he or she:

{…cannot arise except as one whom Satan has prostrated by (his) touch does rise) (Al-Baqarah 2:275)

It meant that such a person does not know his objective, he is just blindly following Satan who will take him to various ways and, by losing focus in life, he will be psychologically unbalanced.

Effects of Usury on Societies

A successful society is a balanced society which, in addition to establishing economic and material advancement it should provide a sphere of spiritual and moral development as well.

In societies where morality and values are not cherished, people will become wild in their behavior, inhuman in their inclinations and tendencies.

Terms and concepts like brotherhood, mercy, solidarity, and charity will disappear; and there will a place only for materialism, greed, and manipulation.

In a society where people are dominated by greed for money and manipulating others’ needs and wants and charging them interest and putting them in the bondage of usury, the tears of orphans and cries of the needy will mean nothing. To a usury-dealer, the basic needs of these people and their sufferings are good opportunities to make profit.

In history, it was recorded that many debtors were forced to become slaves to their creditors when they failed to pay them the money along with the interest that was to be levied on it.

How should we expect in societies, where people are exploiting the needs of others, and make the best use of their difficulties, to see anything other than hatred, envy, grudges, and fights? This, in turn, leads to crimes like theft, murder, and many other social illnesses.

In addition, the money that will be circulated only between the rich will mean that the rich will get richer and the poor will remain in the bondage of poverty.

Usury stops human beings from being productive, and allows them to abandon work and lose the value of being beneficial and realize their own ambitions.

This will mean that production and construction and all other activities will be heavily affected.

Usury also leads to stagnation in capitals itself, as money will not be circulated in the society as it should. Being a means to develop society, money should be circulated to produce the desired effect. Otherwise, it will become a goal rather than a means, and this will lead to stagnation, which will lead to inflation in the economy.

A usury-dealer will not pay his money to productive projects, if there is the faintest danger of loss, which will discourage endeavors, and miss many innovative experiences. 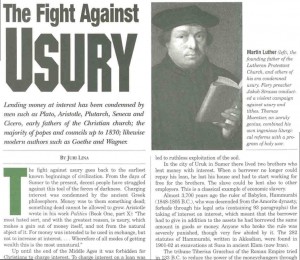 Unnatural reasons include usury, as the big interest levied on money will lead service providers and traders to raise the prices and fees; and this will inflict a great harm upon individuals.

Even when governments try to face this by raising salaries and wages, it does not happen promptly. There will always be a time when inflation rates get out of control, and governments will not be able to face it at all.

There is another terrible aspect as well. When prices go very high, people may stop buying things or getting services, as they will be unable to afford them.

In this situation, things will remain in stores, and this will cause a general stagnation and recession and will have a direct effect on raising unemployment rates.

These are just a few dangers that show us why Islam and other monotheistic religions banned usury and declared war on it. I recommend you read a deep detailed study on these topics.

How to Avoid Consuming Interest Money?

Are Mortgages on Homes in the West Allowed?

What Are The 7 Destructive Sins?