aaa
Q I know I have submitted lots of questions to you, but this one seems to be the most important to me, the one that I pour my heart out. I believe that Islam is the right religion for me. In fact, I want it to be. Islam was the reason that I am not a lesbian, and that I am a married woman with a loving husband. But, I am having a hard time fully embracing Islam. I am going to be honest, I live in America, and so it is hard to view Islam as a loving religion. I know it is just the propaganda like they did to the Japanese during WW2. But, if I like it or not, it is in the back of my mind. I am a loving person, who treats every religion with respect and love. I love and have compassion for everyone. My parents and husband celebrate Christmas and the Christian holidays, but none of them are very religious. I do buy presents for them, but my heart isn't in the holidays as much as it used to be, not since I found Islam. With all that in mind, I want to submit to Allah, I want to believe in Islam, but there is a part of me that cannot go all the way. Why, I don't know. Passages in the Quran confuse me, while it says that there is no compulsion in religion, it also says not to be friends with the Christians or the Jews. Am I wrong about this? I hope I am, because like I said before, I love everyone. Is there anything I can do, to strengthen my faith, is there a way to quiet my mind of the Islamic prejudice. Islam has saved me from the temptations of the body, I want to live a moral life, but I need a way to fully submit. Please help me.

Short Answer: Islam is in fact very beautiful, very gentle and very sweet. As Muslims, we should be the happiest men and women on earth, showing in our lives the beauty of the message which has been given to us. Islam, comes from an Arabic root word that means both “submission” and “peace.” We should be the most gentle of people following the example of our Prophet Muhammad, peace be upon him.

It is a delight to answer it and to offer you total and complete assurance that Islam is not the religion of terror or of uncompromising fanatics we so often see it portrayed as on TV.

I like to say that Islam is, in fact, very beautiful, very gentle and very sweet.

A couple of months ago, a young man from Argentina contacted me to ask if we could meet.

He was experiencing a period of doubt, he said, about Islam.

He had embraced Islam in Argentina a couple of years ago and was now living in the Middle East, but the Islam he found being lived out there did not seem to be the same Islam which had so attracted him in the first place.

At the end of our conversation he went off happy, and we have stayed in touch. All I did was to point out what real Islam is like.

The Beauty of Islam

Unfortunately, even many Muslims have never been touched by the beauty of its message.

It is easy to perform rituals, and in doing so to believe that we are doing as Allah wants.

It seems to me just as important, though, to understand what we are doing and to allow the message of Islam to touch our lives and have an effect on the way we act and think.

Islam, as you know, comes from an Arabic root word that means both “submission” and “peace.”

In all things we take as our sources the Quran and the Sunnah of our beloved Prophet (peace be upon him).

Prophet Muhammad was described by his wife, Lady Aishah, as a “walking Quran,” because he showed in his every word and action what it was to be a true servant of Allah, submitting in all things to His will.

When we look at his life, we see not only that he was a great statesman and tactician, a great leader and counselor, but he was also full of fun and full of mercy and compassion.

These words seem to me to sum up what Islam is like.

Many religious people seem to think that we need to have miserable faces if we are religious. The opposite is true.

As Muslims, we should be the happiest men and women on earth, showing in our lives the beauty of the message which has been given to us.

Even though we live as very poor Muslims, often giving such a bad example to others that they see an altogether different Islam, we are called to be the best of people.

Called not just to talk, but to act, we read in the Quran:

{It is not righteousness that you turn your faces to east or to west,” but it is really righteousness to worship and believe in Allah, and his angels and books and messengers…}

And the verse continues:

{…to spend of your substance, out of love for Him, for your kin, for orphans, for the needy, for the wayfarer, for those who ask, and for the ransom of slaves; to be steadfast in prayer and to give zakah, to fulfill the contracts ye have made; and to be firm and patient in pain and adversity, and throughout all periods of panic, such are the people of truth, the God-fearing.”} (Al-Baq 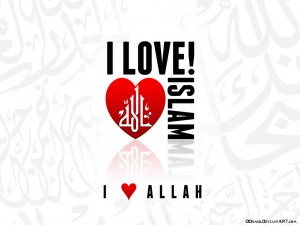 So, the heart of Islam is indeed very caring and very beautiful.

There is no room for harsh words and uncompromising stances.

We should be the most gentle of people. The Prophet is reported to have said:

As Muslims, like our Prophet we should be gentle and merciful.

As for dealing with those who are not Muslim, we should be even more gentle and more merciful.

Those who set out to portray Islam in a bad light often select verses from the Quran out of context, to prove their points.

They quote verses about killing Jews and fighting non-believers, forgetting that these verses came during a time of war, in which the people fought were not fought just because they were Jews or non-Muslims, but because they were traitors to the state, working against the Muslim community.

And in another place,

People quote this to suggest that Muslims should always be looking to kill non-believers.  This verse referred to enemies in war, but it goes on to say,

In other words, Muslims are fighting back; they are not going out looking for mischief.

All religions teach that you are allowed to defend yourself, so why not Muslims?

Dealing with People of Other Faiths

In fact, in today’s world, people of faith need to work even more closely together, to combat those secular forces who would do away with faith and spirituality altogether.

I have just finished writing a book, called Talking About Other Faiths, which stresses the respect which Islam has for all people of faith and for what they hold dear.

We can disagree with what others believe, and even tell them quite plainly that they are wrong, but we can still be friends.

Just recently I was in Ireland for a lecture tour, appearing on TV and radio, and telling the people of Ireland about the sweet and gentle message of Islam.

During that tour I made courtesy visits to religious and civic leaders in Ireland, none of them Muslim.

How disappointed I was, then, when one day on the evening TV News there was a report about how a young Christian woman in Afghanistan had been gunned down and killed, precisely because she was a Christian.

Apart from condemning such actions as having no part of Islam in them, I regretted how so many Muslims have just missed the point.

Website like AboutIslam.net gives a broad and balanced picture of Islam, and you would do well to take your information from sites such as these, supported by well-known and well-respected Islamic scholars from around the world.

Islam is the “middle way”, not straying to extremes of either kind:

{Thus we have made of you an Ummah justly balanced that you might be witnesses over the nations, and the Messenger a witness over yourselves.}   (Al-Baqarah 2:143)

Just as I told the young man from Argentina, Islam is perfect, but Muslims are not.

We are men and women, of flesh and blood, trying our best to submit to Allah’s will in all things. Most oftentimes we get it wrong, and our actions give bad example to others.

Sometimes, though, by Allah’s grace, we get it right, and it feels good to do so.

I conclude with another beautiful verse from the Quran.

It talks about how Muslims should deal with others, but it also teaches us a lesson about how we should live our own lives.

{Thus is it due to mercy from Allah that you deal with them gently, and had you been rough, hard-hearted, they would certainly have dispersed from around you;

Pardon them therefore and ask pardon for them, and take counsel with them in the affair} (Aal Imran 3:159)

Islam is Not Just Rituals: Love is at its Core

Man is Created to Love