aaa
Q I don't quite understand the point of being in this world. As in, why all this pain and misery when we didn't even opt for it? Every time I have asked this question, I am given that verse from Quran (the one in which all people had pledged to obey Allah), but then I wonder, we don't remember that pledge. It is in human nature to not honor any promise he doesn't remember. I don't understand why do some people have such easy and pleasant lives and why do so many people have very difficult lives. I know how scholars say this is temporary and eternal ease will follow, but what if someone is so sick of his circumstances that he wants to become non-existent. There is so much of chaos, even amongst the people who claim to be religious. There is no agreement. No peace. Also, there are people who don't have any people who love them. They don't have adequate resources too. Why would be life like that when it's not even been opted for by us? Moreover, no one has ever returned from the other side, what if there is no paradise.

Short Answer: When we despair and give up, we disbelieve in Allah’s Names and His Power to provide for us, bring us justice, appreciate our efforts, open doors for us, expand our chests and grant us relief and guidance and bring us from the depth of darkness into light. We may get fed up with our circumstances and wish to be non-existent. While Allah tells us to be patient because things will get better here- even if it’s after a long while-, and there will also be unlimited reward for us in the hereafter.

We are very happy to receive your message. Thank you so much for approaching us, and may Allah (swt) shower ease, peace, mercy, happiness and serenity upon your heart.

We completely understand your questions and the points you were raising. We highly appreciate you taking the time to explain all of this to us.

We noticed around 7 points or questions in your message. Let us discuss them together bit by bit.

2- We don’t remember the pledge.

It is in human nature not to honor any promise he doesn’t remember.

It is excellent that you mentioned “human nature”.That’s exactly how we know this pledge. We know it through our innate human nature called “Fitrah”.

Allah’s Messenger (peace be upon him) said:

“No child is born but upon Fitrah. He then said. Recite: “The nature made by Allah in which He created man, there is no altering of Allah’s nature; that is the right religion. (Quran 30: 30)” [Sahih Muslim]

So what is this fitrah?

It is the innate nature and laws that Allah [swt] created us with. For example, when the child is born, how does he/she know how to breastfeed from his/her mother? Who taught him how to eat this way? It’s fitrah.

One of Allah’s Beautiful Names is “Al Fatir” the One who created and designated the fitrah for everything He created.

Human beings are born knowing the names of Allah.

For example, have you seen anyone who wakes up in the morning, feels so hot and decides to go to work or the university completely naked? Of course not. It is unacceptable. How do we know that or how do we have this feeling? Is it because we have read and signed certain laws? No, it’s our innate fitrah that knows this is not acceptable. And Allah’s name is “Assataar” The Source of Honorable Covering.

Also think about this: human beings are inclined towards seeking justice and they find injustice unsettling. We haven’t really seen or lived in a place that applies justice completely, yet we continue to seek and call for justice. How do we know it exists? Why do we keep calling for it?

This is fitrah. And Allah’s Name is The Just. Deep down we all know and connect with Allah and know His Names and seek His Attributes.

This is a mercy from Allah to us to help us remember Him and find Him.

{And [by] the soul and He who proportioned it. And inspired it [with discernment of] its wickedness and its righteousness,He has succeeded who purifies it, And he has failed who instills it [with Corruption].} (Quran 91: 7-10)

So, Allah [swt] already inspired us what is right and what is wrong.

{Indeed, We created man from a sperm-drop mixture that We may try him; and We made him hearing and seeing. Indeed, We guided him to the way, be he grateful or be he ungrateful.} (Quran 76: 2-3)

So, Allah [swt] already placed in us this innate fitrah that knows Him and knows that there must be a Creator, if not, then seriously, what’s the purpose of this existence?

In addition to the fitrah, He also sent us Messengers, and He gave us the Revelation, The Last and Final Complete Direct Word from Him to all mankind: The Quran.

All your questions, each one of them, has its answers in the Quran. Allah, The Creator The Most Knowing already knows and He answered.

But it’s upon us to either listen, open our heart and mind to receive answers, or to reject and turn away.

{And whoever turns away from My remembrance – indeed, he will have a depressed life, and We will gather him on the Day of Resurrection blind.”

He will say, “My Lord, why have you raised me blind while I was [once] seeing?”

You can find many stories of brothers and sisters who reverted to Islam saying that they finally feel comfortable and feel like they’ve returned to their natural state. That’s why they choose the word ‘revert’ not convert to Islam, because Islam is the natural state of being, and one remembers and returns to it.

To wrap up: Allah gave us fitrah (inner compass that knows His location, His existence and seek Him), He sent Messengers, He sent His Book and He asked us to keep reminding one another of Him and keeping each other steadfast on His path until we go back to Him after this short life journey.

We have everything that we need, and truly Allah [swt] is the Most Just.

3- Why do some people have such easy and pleasant lives and why do so many people have very difficult lives?

Don’t judge a book by its cover while you don’t know what’s in there. 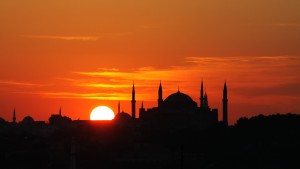 Allah is The Just.We are ALL being tested.

So, life is a test for all human beings.

This is exactly what your question is implying… that some people are honored and some are humiliated, while in fact, they’re both being tested! Subhan Allah.

Note how Allah [swt] used the word “tried” in both cases; difficulty and ease. Both are tests. No one is better than anyone else.

Allah [swt] gives us our tests according to our capacities.And He says:

So, being rich, healthy, wealthy, or famous is not necessarily a sign of an easy life or ofhaving no problems.

If that’s the case, why do celebrities like Robin William commit suicide? Why would top celebrities who have everything you described as luxury (like Whitney Houston, Amy Winehouse, Philip Seymour Hoffman and others) commit suicide?

Material wealth, luxury or worldly successes are not the purpose of this life, nor the reason for inner peace and happiness. And The Creator [swt] in the Quran madethat clear to us.

4- What if someone is so sick of his circumstances that he wants to become non-existent?

You can then remember that: “Never a believer is stricken with a discomfort, an illness, an anxiety, a grief or mental worry or even the pricking of a thorn but Allah will expiate his sins on account of his patience.” (Al-Bukhari and Muslim).

Any difficulty you’re going though is rewarded, it expiates your sins and elevates your status in Jannah.

Lessons to Learn from the Story of Prophet Joseph

There is something interesting here to discuss as well. Remember the story of Prophet Joseph (peace be upon him) which Allah [swt] told us in Surat Yusuf (Chapter 12 of the Quran), and described as “the best of stories.”

What was his story? He was a noble Prophet, son of a noble Prophet and then what happened to him? His own siblings plotted against him as they disliked him, and they even wanted to kill him. He was taken away and separated from his beloved father. Moreover, he was thrown in a well as a helpless child. Then sold as a slave. Finally, thrown in prison unjustly.

Eventually,he came out of prison to become a noble Governor, he was united with his father, and he regained power, authority and dignity. He then said:

{Allah has certainly favored us. Indeed, he who fears Allah and is patient, then indeed, Allah does not allow to be lost the reward of those who do good.} (Quran 12: 90)

So, after everything that happened to him, he still had good perception of Allah and His Mercy. He said Allah has certainly favored him and his righteous brother. And he gave us the answer to our problem: indeed, if we fear Allah and be patient, then Allah will never allow our rewards to be lost.

In this same chapter we get a very important reminder.

Why is despairing in the relief of Allah considered an act of disbelief? Because Allah’s Names include ArRazaq (The Provider), Al Adl (The Just), AsShakoor (The Most Appreciative), ArRahman (The Most Merciful), Al Fatah (The Opener), Al Baset (The Expander), Al Hady (The Guide), AnNour (The Light)….

When we despair and give up, we disbelieve in Allah’s Names and His Power to provide for us, bring us justice, appreciate our efforts, open doors for us, expand our chests and grant us relief and guidance and bring us from the depth of darkness into light.

We may get fed up with our circumstances and wish to be non-existent. While Allah [swt] tells us to be patient because things will get better here- even if it’s after a long while-, and there will also be unlimited reward for us in the hereafter.

How Can I Find Help in Desperation? (Part 1)

What To Do When I Feel I Hate Allah for Giving Me Trials?

Take Benefit of Your Health Before Your Sickness