aaa
Q Assalamu Alaikum! There is a lot of confusion about some matters related to Hijab. There is also cultural difference in the methods of Hijab. A most discussed question is, whether we have to cover our faces or not? There is lots of difference of opinion about it. I live in a region where whether is often warm and suffocating, wearing Hijab on face is difficult because of the weather related and also some medical issues. So I wanted to clarify this. Also do we have to cover our bodies in gowns or we can use any kind of dresses that cover us effectively?

Thank you for your question as well as for contacting Ask About Islam.

First we need to understand that Hijab is basically an inward culture than an outward one. Rather, the outer Hijab dress is only an expression of one’s acceptance of the inward culture of Hijab. And this inner culture stems from one’s determination to follow the commandments of Allah Almighty as well as the teachings of Prophet Muhammad, peace and blessings be upon him.

One’s determination to observe Hijab, as is indicated above, should come directly out of one’s Iman or faith. All the major mainstream scholars of Islam identify Hijab as a fixed obligation upon the Muslim women.

That is to say, an exemption cannot be allowed to anyone to abandon it, unless there is a life and death situation, where such exemption is granted by the Shari’ah, as in the case of other similar obligations as well. And in such cases, the exemption is only provisional or conditional.

People in the west particularly point out the differences in culture to raise questions about the validity of the Hijab there. Islam is for all places and for all time. Cultural differences are man-made, and they disappear the moment people move out of their traditional paradigm.

For a non-Muslim the acceptance of Islam as a way of life necessitates an inevitable paradigm shift, which obviously means a change of culture as well.

For instance, see what happens to a Hindu in India who embraces Islam. His approach to the world changes dramatically: Instead of seeing God in the cow, the monkey or the snake, he lifts up his face and turns his eyes upward toward the heavens recognizing that God is the Creator Supreme high above all the evanescent phenomena of the world.

That is the starting point of an overall change not only in his beliefs, but also in all aspects of his external manners and behaviors. When he becomes a Muslim, can he still continue wearing his saffron clothes, tilak (i.e a mark on the forehead made of sandalwood paste, turmeric etc.), “sacred thread” and so on?

Not at all, because the Muslim culture is entirely different from the Hindu culture. And Hijab for a Muslim woman is an inseparable part of her Islamic identity. And while she continues to be a Muslim she cannot abandon it.

The particular verse in the Quran that gives the command for Hijab is as follows:

{And tell the believing women to lower their gaze and be modest, and to display of their adornment only that which is apparent, and to draw their veils over their bosoms, and not to reveal their adornment save to their own husbands or fathers or husbands’ fathers, or their sons or their husbands’ sons, or their brothers or their brothers’ sons or sisters’ sons, or their women, or their slaves, or male attendants who lack vigor, or children who know naught of women’s nakedness. And let them not stamp their feet so as to reveal what they hide of their adornment. And turn unto Allah together, O believers, in order that ye may succeed.} (Quran 24:31)

The Hijab is a significant means in the Muslim society for the safeguarding of the modesty, dignity and honor of men and women. Women, when they observe Hijab keep themselves safe from temptation or harassment resulting from lustful gaze or amorous advances from men. And for men who have such tendencies, Hijab serves as a disincentive.

Hijab for a woman requires that the dress is not tight or transparent, and that it should cover the ‘awrah (sensitive parts of the body a woman must cover in front of men). 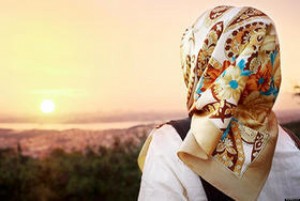 One may quote here the explanation given by Sheikh Ahmad Kutty, a senior lecturer and an Islamic scholar at the Islamic Institute of Toronto, Ontario, Canada, who states:

{And say to the believing women to lower their gazes and guard their chastity, and let them not display of their charm – except what is apparent.} (An-Nur 24:31)

Commenting on the phrase: {what is apparent} Ibn `Abbas, the famous Companion and the Quran exegete, said: “It means face and hands.” In other words, according to Ibn `Abbas, a woman must cover all her body except her face and hands while in the presence of men who are not related to her directly. The list of those in whose presence she needs not cover is clearly outlined in Surat An-Nur 24: 31.

The majority of imams – including those of the four schools, as well as others – share the above interpretation of Ibn `Abbas, and thus hold the opinion that a woman is not obliged to cover her face and hands….”

The aforementioned position of the majority on this issue seems to be more consistent with the general understanding and evidences of the Quran and Sunnah than of those who advocate covering the face and hands as well. There are several proofs which point to this conclusion:

Firstly, the verse quoted above from the Quran seems to presume that the women it addresses are not wholly covered, i.e. face and hands. Otherwise, there is no sense in ordering both genders to lower their gazes.

Secondly, it is a general consensus among scholars that a woman is not required to cover her face and hands while performing salah (ritual prayers). If these were deemed to be`awrah, it would certainly have been necessary to cover them.

Thirdly, a woman is required to bare her face while she is in a state of ihram (consecration during Hajj and `Umrah). This again confirms what we said earlier.

Moreover, the evidences in the sources – the Quran and the Sunnah – are overwhelming in showing that the hijab, as prescribed by Islam, was not meant to segregate women or shut them out of the social involvement and participation in the affairs of the Muslim community.

This is since the participation of Muslim women – at all levels of Islamic life – is fully documented beyond a shadow of doubt in the sources of Shari`ah. Such active participation as described in the sources is conceivable only if we assume that women were not wholly covered from head to toe.

In light of the above, we conclude: a Muslim woman is required to cover all her body except her face and hands, according to the majority of scholars belonging to all schools. Covering the head, however, is not at all a disputed issue among them – they all agree that this is a necessary part of Hijab.” 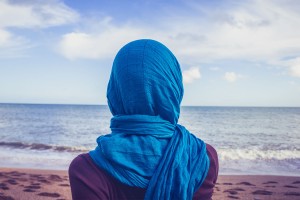 The foregoing indicates that it is most reasonable to accept the view of the majority of scholars who say that niqab is not obligatory. That is to say, a woman must cover her whole body except the face and hands.

As for the kind of dress – such as gowns or other forms of dress – it is left to the choice of the women themselves as long as they abide by the ruling of Hijab discussed above.