aaa
Q Dear Sirs, I wish to know what would happen in the Muslim community if a man decides by himself that he want to leave Islam, that is, if he decides to follow and believe in God but without following all that is literally stated in the Quran. Is a man in your religion free to make this kind of choice if it comes from his heart? This is just my curiosity and I have the impression that you are serious and will inform me in a proper and correct way.Thank you very much.

Freedom of religion is a controversial subject, even in the twenty-first century, and it usually generates a lot of heated discussions. The view of Islam in this regard is evident from the Quran, which says what means:

{Let there be no compulsion in religion: Truth stands out clear from Error…} (Al-Baqarah 2:256)

These two verses clearly show that a person’s belief must be true, sincere, and not generated as a result of force or compulsion from outside. From the Islamic point of view, Man is God’s khalifah (vicegerent) on earth; which means that he is a free and responsible ambassador of God on earth, and everything on earth has been created for him.

Man is given not just freedom; he is given intelligence, imagination, and all other faculties that enable him to make use of the blessings God has given him. Apart from that, he is given guidance too, so that he makes use of his freedom and faculties for his own benefit in the proper way.

Thus, Heaven or Hell is the natural outcome of the willful choices we make here; and that is the test God has presented before us. As in the case of any test, the participants must have the freedom of choice. If not, the test and the reward or punishment will be meaningless.

The foregoing means that we are answerable for all our beliefs and actions. So, there is no question in Islam of using force in matters of religion. Your question is about a person who believes in God, but does not literally follow the Quran. 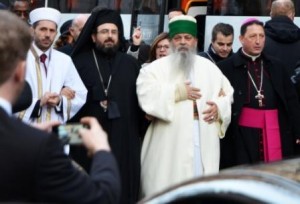 In this regard, you may note that there are many people in the Muslim world who call themselves Muslims but do not actually follow the commands of God as given in the Quran.

For all practical purposes, Muslim societies do not make any distinction between a Muslim who strictly follows the commands of Allah and one who doesn’t; though by the standards of Islam there is a big difference.

But, there can be an Islamic state where the Quran is accepted as the constitution and the Islamic Shari`ah (law) is in force as the basis of its civil and penal code. In such a state, Muslims can have a special status as citizens, while non-Muslims are given their due rights to believe and practice their religion.

There, if a Muslim openly declares that he rejects Islam, it is tantamount to decrying the constitution of that country and the person will be judged for treason and duly punished.

Hope I have answered your question.