aaa
Q My question has to do with du'a (supplication). How is it performed and when are the times that du'a will be answered? Another thing: Is it true that if you ask Allah by His greatest name, He will give you what you want? And if so, what is His greatest name? I have come into contact with many hadiths where the Prophet said that this person asked Allah by His greatest name and another hadith in which he did not tell Aishah the name. Are these hadiths authentic? Another hadith I read said that whoever prays six rakaahs after Maghrib Prayer is as if he or she did 12 years of worship. Is this true?

I hope that the response is beneficial to you and to all those who wish to take full advantage of special times for making du’a (supplication).

There are many times and situations that we may find ourselves in, that du’a can be offered and have the best chances of being answered.

We must be clear in our understanding, however, that having our needs met by Allah through making du’a is not merely a matter of being lucky or repeating a secret magical set of words.

It is essential to remember, as Muslims, that we should try to be in as high a level of God-consciousness (in Arabic, taqwa) as possible so that all of our supplications will be answered regardless of the time of day it is made or the situation we are in.

However, there are special times to make du’a where it is more likely to be accepted.

There are many hadiths mentioning excellent times to make supplications.

The following are just a few times and perhaps the most well-known:

Supplication should be treated seriously and performed with the proper etiquette or manners so that Allah can accept it as being sincere and therefore respond to our requests.

When we make du’a, we should:

End with “Alhamdulillahi rabbil `alameen;” meaning: “All Praise belongs to Allah, Cherisher and Sustainer of the Worlds.” 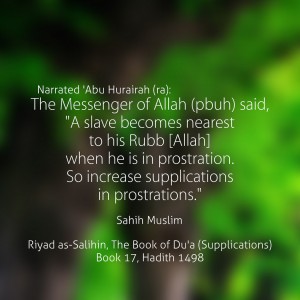 With respect to Allah’s greatest name, it was narrated by Anas ibn Malik that the Messenger of Allah (peace be upon him) heard a man saying:

“O Allah, I ask You by virtue of the fact that praise is due to You, there is no god but You, Who shows favor and beneficence, the Originator of the heavens and the earth, O Lord of Majesty and Splendor, O Living One, O Eternal One.” The Prophet (peace be upon him) then said, “He has supplicated Allah using His Greatest Name; when supplicated by this name, Allah answers, and when asked by this name, He gives” (Abu Dawud).

Although it is true that Prophet Muhammad (peace be upon him) informed us that when we call upon Allah using His greatest name our supplications will be answered, there is no clear evidence indicating which of those names mentioned is the greatest name.

{Say: Call upon Allah, or call upon the Most Compassionate. With whatever name you call upon Him, to Him belong the Most Beautiful Names. Neither speak your prayer aloud, nor speak it in a low tone, but seek a middle course between.} (Al- Israa 17:110)

More answers in the following hadith

The supplications found in the following hadith may take care of the problem for us.

The Messenger of Allah said,

I ask You by every name belonging to You which You have named Yourself with, or which you revealed in Your Book, or which You taught to any of Your creation, or which You have preserved in the knowledge of the unseen with You, that You make the Quran the life of my heart and the light of my breast, and a departure for my sorrow and a release for my anxiety,’  but Allah will take away his distress and grief, and replace it with ease.”

He was asked, “O Messenger of Allah, should we not learn it?” He said, “Of course, whoever hears it should learn it.” (Musnad Ahmad)

Allah also commands us in His noble Book to call upon Him using whichever of His beautiful names we please.

{And (all) the Most Beautiful Names belong to Allah, so call on Him by them and leave the company of those who belie or deny (or utter impious speech against) His Names. For what they do, they will soon be requited.} (Al-Aaraf 7:180)

{And when My servants ask you concerning Me, surely I am very near; I answer the prayer (supplication) of the suppliant when he calls on Me. Let them also, with a will, listen to My call and believe in Me That they may walk in the right way.} (Al- Baqarah 2:186)

In conclusion, it cannot be overstated that the most important way we can have the best of this life and achieve Allah’s Mercy on the Day of Judgment is to follow what He has commanded and avoid what He has warned us about.

Above that, we must encourage what is good and discourage what is evil in the world around us. This is how we stay in a close personal relationship with our Creator.

{He is the Living, there is no god but He; therefore, call on Him, being sincere to Him in obedience.} (Ghafir 40:65)

With regard to the issue of praying six rakaahs after the Maghrib Prayer, the confirmed Sunnah Prayers are:

Therefore, the hadith that recommends offering six rakaahs of Sunnah 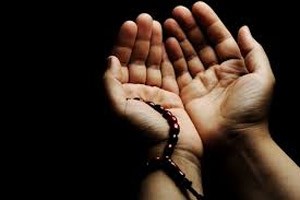 Payer after the Maghrib Prayer has been classified by Imam An-Nawawi (famous Muslim scholar of Hadith) as weak because it goes against the authentic hadiths in this regard.

Other scholars like Ibn Al-Qayyim said it is a fabricated hadith.

For more on Sunnah Prayer, you can read Sunnah (Optional) Prayers.

The other hadith, in which the Prophet (peace be upon him) did not teach Aishah the greatest name of Allah, has been classified by scholars as a weak hadith.

I hope this helps. Salam and please keep in touch.

List of Times and Places Where Dua is Accepted

The Best Way to Get Your Prayer Answered… Ibn `Atta’ Explains

Dua Is Powerful, but Why Not Answered Sometimes?

Istikharah: How to Read the Answer?

Is There Any Duaa to Find a Good Husband?

Using the 99 Names of Allah in Certain Numbers & Combinations: OK?