aaa
Q I am trying to end backbiting but sometimes I am confused and not sure which is classified as backbiting. I know that talking behind someone's back in a manner they do not like is backbiting etc. Anyways, when I come home everyday I tell my mum things that happen in school just to update her about my everyday life. We have a laugh because I tell her about different people (not in a mean way). There is this person in my class and we both know he is smart, but he mumbles when he speaks because he wears braces on his upper jaws and lower jaws, so I tell my mum how teachers in class can't react or understand him sometimes, or little things he has done which made me laugh and I am nice to him. We both laugh but I feel like I'm mocking him, is this a sin and backbiting? I asked my mum and she said no because she doesn't see him as a fool she sees him as someone smart with two braces in his mouth. I only talk about him to my mum, I don't spread. I thought it would be okay because I only share things like this to my mum not to anyone else. Also there's another boy who is quite stuck up but I feel like I am backbiting him because he loves to show off and show everyone he's smart when we know he is, I just say how he is smart and skilled but the fact that he tries to shove it down everyone's throat it is annoying...I have spoken about him to a few people, and they were in the same classes as me, is that backbiting? I do not dislike him, and I do tell my mum and other people the good things about him, and I asked her how she sees him and she said someone who is smart...but a little arrogant or proud. Another friend described him as egocentric and the person knows him very well, I have told the boy that I find him sometimes annoying and a little arrogant as a joking way, I have told him how I feel about him and he laughed and smiled - we still get along very well.

Thank you for contacting Ask About Islam and for your question.

It is commendable that you are concerned for your Akhirah and for the correctness of your deeds.

What Is Backbiting Exactly?

You have defined backbiting (gheebah in Arabic) correctly, viz. “I know that talking behind someone’s back in a manner they do not like is backbiting”.

Whenever you say, hint at, or mention something related to a person, just imagine they were sitting there and heard it. Would they dislike what you’ve said?

If so, then that mention is regarded as backbiting and it is impermissible in Islam, unless it is done for valid reasons.

(For a list of specific situations and reasons in which backbiting a person becomes permissible, please click here and here.)

Secondly, just because you have mentioned someone’s bad habits or traits to them directly to their face doesn’t make it permissible for you to mention those traits of theirs to others behind their back.

This would still be considered backbiting because that person would surely still dislike being mentioned in that way behind their back.

Don’t Engage in Sin To Be Close to Your Family

Sister, you have done well to remain close to your mother and to share details of your life with her.

Nothing pleases a mother more than to know that she is trusted and needed by her offspring.

However, I would like to warn you about falling into the habit of backbiting your friends or schoolmates with your mother.

Satan will come to you with the guise of being close to your mother, or pleasing her by sharing your log of daily events with her, until you both become habitual in backbiting your friends and classmates.

Be very wary of falling into this trap. Speaking both as a daughter and a mother, I know only too well how quickly mother-daughter duos can fall into this trap.

I’d like to urge you to change the way you talk about your day’s events at school with your mother.

You can mention vices and evils that you have seen in people at school indirectly, without using names of specific people in front of your mother.

For example, you can say, “Some girls at school act very arrogantly, and sometimes they say or do such-and-such, which is wrong. How should I deal with their behavior?”

However, if indirect mention of vices in this manner results in your mother figuring out who it is that you are talking about negatively, it will again be classified as backbiting.

So be very careful about how you indirectly mention the vices of people, because a believer concerns and busies himself or herself with their own personal shortcomings and mistakes, instead of focusing on criticizing and/or laughing at others.

Focus On The Real Purpose of School 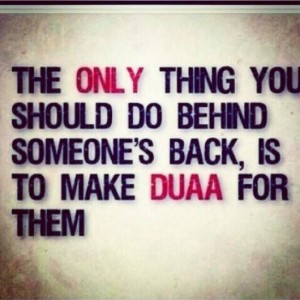 In the end, I’d like to remind you that you go to school to seek knowledge.

Your observations and accounts of the people you meet and interact with at school should be limited to a minimum, based only on necessity.

You should keep yourself busy in your studies and avoid talking about people with your mother or with anyone else for that matter.

Etch this advice from me in stone: talking about people always, always opens the door to backbiting, until it becomes a habit.

May Allah guide you to give up discussing people with your mother, and to replace your discussions with her to topics that are of benefit and value both in this world and the next. Ameen.

Backbiting – Most Graphic Scene in the Qu’ran