aaa
Q Hello, Thank you for your decent page and its effort. I believe there are so many things in Islam that help you elevate your spirit. Sometimes I think of this spiritual idea of monasticism and how it helps with that. I used to be Christian, but I am not any more… still thinking where to go… Please tell me about Hajj and how it touches your spirit. I know Hajj must have inward ethics, more than just being a yearly ritual. Please give me a clear idea. Thank you.

In fact, there might be no way of attaining to God, Most High, except by divesting oneself of desires.

This is done by abstaining from pleasures, confining oneself to necessities and devoting oneself exclusively to Allah.

It was for this reason that the ascetics of different religions used to isolate themselves from people.

They retreated to mountain caves, preferring solitude to the company of others, in quest of intimacy with God.

For the sake of God, they forsook worldly pleasures and applied themselves to strenuous exertions in pursuit of the Hereafter.

As for Islam, it is a religion that does not at all deny man his human nature, which is characterized by the ability and desire to socialize and mingle.

Let alone Islam’s regard to man as the only being responsible to fulfill God’s will and implement it on earth.

Members of earlier religious communities innovated the ways of monks to get closer to their deity.

Instead, God has favored Muslims by Hajj (pilgrimage), to be the Islamic form of monasticism and their ascetic act. In Hajj, the pilgrim is recommended to free his mind from all businesses, except to pursuit God’s love and closeness.

If the pilgrim understands where Hajj really stands in Islam, he/she will then find in him/herself an automatic process of specific subsequent steps. These are yearning for it; resolving upon it; severing the ties that keep one from it; acquiring the seamless garments to be worn during ihram.

These also include purchasing the necessary provisions; settling transportation; setting out from home crossing the desert; ihram at the assembly point, with the cry of ‘labbayk‘ (at Your service God!); entering Makkah, and then the completion of all rites of pilgrimage.

Every step of these serves as a reminder to the mindful and a lesson to the heedful. They serve as an indication and an instructive tool to the sagacious, and as an exhortation to the faithful aspirant.

In my answer I will try to signify the key points that reveal the mysteries of some of these steps. In fact, they should provide every pilgrim with tranquility of heart, inner purity and fullness of understanding.

Yearning to meet God should create a longing for all that will lead to that meeting. That is because the lover craves everything in any way connected to his beloved.

According to Islam, God is the goal of the human heart. Since God attributed the Ka`bah to Himself, this connection is surely enough to make one yearn for this sacred place.

The pilgrim should always be aware that by his/her resolve, he/she is purposing to leave his family and homeland behind, forsaking pleasures and desires. He/she ought to hold in high esteem both the House and the Lord of the House. He/she needs to make sure his/her resolve is purely for the sake of God, untarnished by hypocrisy and or any desire for fame.

The pilgrim is supposed to be fully aware that only what is sincere in his/her intention and action will find acceptance. Also, that there is no offence more outrageous than to visit the House of God and the lands He chose to be sacred for ulterior motive.

Actually, pilgrimage demands the rejection of all iniquities and sincere repentance to God for all acts of disobedience, for each iniquity is a tie, and every tie is like having a creditor, clinging to one’s collar.

If the pilgrim hopes his/her visit is to be accepted, he/she needs to carry out God’s commandments, cast off iniquities, repent to Him for all acts of disobedience, and sever his/her heart’s connection from all worldly concerns.

Only then, can the pilgrim turn his/her face towards God, as he/she turns his physical face in the direction of His House during prayers. Unless the pilgrim does so, he/she would gain nothing from his/her journey except trouble and hardship at the very end. 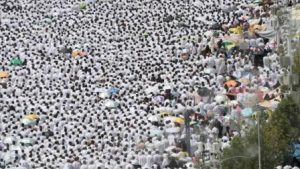 Leaving home, the pilgrim should know that he/she has now left hearth and home, bound for God on a journey unlike any worldly voyage. He/she should be conscious at heart of what he/she wishes; where he/she is heading and Whom he/she intends to reach.

In fact, the pilgrim needs to be aware that he/she is wending the way toward the King of kings. This is along with a host of visitors, who have been summoned and have answered the call. Those are, within whom a great longing has been awakened, who have been roused and have risen, who have severed connections and said farewell to all relations.

Even crossing the way, with all attendant hardships, the pilgrim should recall the crossing at death between this world and the assembly point on the Day of Resurrection. His/her separation from family and relatives should put the pilgrim in mind of the desolation of tomb and its solitude. This is where he/she will find nothing to relief the agony except the hope in God’s love and mercy.

In fact, purchasing the garments of ihram should recall to the pilgrim’s mind the shroud in which he/she will be wrapped for burial.

Ihram garments should remind the pilgrim that just as visiting the House of God in unusual garb and attire, so it would be after death.

This is when this very same pilgrim will meet God Almighty dressed in a shroud, a different fashion from that of this world.

Then, at the appointed place of ihram, the pilgrim should put on the ihram attire saying: ‘labbayk‘ (at Your service Lord!), with the feeling of responding to the summons of God. He/she needs to recall that mankind would be summoned and gathered together at the site of resurrection, responding to God’s call.

In fact, they will be divided into the favored and the abhorred, the accepted and the rejected.

Exactly like the pilgrims at the assembly point, they will be oscillating initially between fear and hope.

This is when they do not know whether or not they will be enabled to complete their pilgrimage and whether they have been accepted.

Reaching Makkah and the House

As the pilgrim reaches Makkah, he/she needs to remember that they have arrived safely at the lands, chosen by God to be a sanctuary.

God has chosen to attribute the Ka`bah to His own Self, because it was the first place established on earth, for the creed of Oneness to be practiced in devotion.

Entering this sacred place, the pilgrim ought naturally dread not being worthy to approach God.

Yet his/her hope should be uppermost, for God is Generous and Compassionate in comprehension, the honor of the House is tremendous, the visitor’s right is respected, and protection is secure for all who seek refuge.

This situation is to remind the pilgrim of how people will stream towards Paradise. This is on the Day of Resurrection, when all is hoping to enter.

The pilgrim’s heart should be filled with reverence, fear, hope and love, especially during tawaf (circumambulation around the Ka`bah). The purpose of it is not at all supposed to be the physical circumambulation of the House. It is not a body rotating around another body. The true purpose is the ‘circling’ of the heart in remembrance of the Lord of the House.

The heart of the pilgrim needs to reach a point when consciousness begins with God alone and ends with Him. This is just as the circumambulation starts from the House and ends at the House.

Supplication at the Mount of ‘Arafah

Standing at `Arafah, pilgrims are gathered for supplication with their different tongues and various groups. This also recalls the site of Resurrection. The standing place is never devoid of an honest and sincere generation, or one that is righteous and magnanimous.

Here, their aspirations are joined. Their hearts are devoted exclusively to humble supplication and entreaty; their hands raised to God and their necks outstretched and eyes turned heavenward, as they aspire of one accord in quest of mercy.

They should not at all suppose that God would disappoint their hopes, frustrate their endeavor or begrudge them an overwhelming mercy. That is why it is said that it is a most grievous sin for a Muslim to attend the standing on `Arafah, imagining that God has not forgiven him or her.

Muslims regard Prophet Muhammad to be the role model and chosen guide for mankind.

Visiting his tomb at Madinah is not an essential obligation in making Hajj valid or complete.

Yet, it is always advisable and strongly recommended that whoever can reach Madinah should visit the burial place of the beloved prophet. This is simply to pay respect to the greatest teacher humanity has ever known.

Aware that his precious steps have trodden in every place around Madinah, the pilgrim ought to walk with dignity and caution, recalling the messenger’s humility and graceful gait.

It is expected that the pilgrim has embarked this long journey in order to visit the homeland of Prophet Muhammad, where he strove against foes and proclaimed religion.

The purpose should be pure love for the prophet and longing to behold his relics and burial place, not trade or any kind of worldly gain. 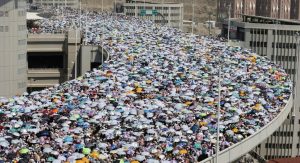 Touching and kissing tombs is a custom of non-Muslims. As for Muslims, they should never do such habits.

Their respect and love is not for the walls or stones of any tomb. It is for the great message and the noble person who strived to convey it throughout his whole life.

To conclude, dear Mark, the pilgrim should watch the duties of his heart at all stages of pilgrimage. He/she would realize if he/she has been accepted or not, by watching his heart and its conduct. If he/she finds his heart extremely adverse to this world of delusion and inclined to that of intimacy with God, then he/she may count on acceptance.

Thank you and I hope this answer is satisfactory.

If you need to know more, please try to refer to the following books:

Understanding the Why of Hajj: Is It Only For Worship?

How Can I Describe Hajj to Non-Muslims?

The Woman Who Founded Hajj Rites