aaa
Q Can you please tell me all that you know about the similarities and differences between Muslims and Christians? Why don’t Muslims eat pig meat?

{…and you will certainly find the nearest in friendship to those who believe [to be] those who say: “We are Christians,” because amongst these are men devoted to learning and men who have renounced the world, and they are not arrogant.}

In other words, Allah has made the hearts of the Muslims and Christians closest to one another out of all the other religions, because of their common outlook on the world. This doesn’t mean that their beliefs are one in the same; however Allah has made it so that the two religions can live together in harmony and benefit from one another’s knowledge and civilization.

We learn from the aforementioned verse of the Quran that the similarities between Christianity and Islam are their mutual respect for knowledge and humility. Both also share their understanding that the life of this world is neither the purpose nor pinnacle of human existence, rather the next world, the life after death, is the final objective for which we were created.

Similar to Christians, Muslims also believe in Jesus (peace be upon him) as the “Christ”; “Messiah”; “Logos”; and “Miraculous Conception”. Then his mother, Mary (May Allah be pleased with her), is held in the utmost respect and is considered one of the most pious and beloved women of Allah to walk the face of the earth.

The most fundamental difference between Christianity and Islam is in the nature and role of Jesus (peace be upon him) and thereby the nature of God. Muslims hold Jesus to be a prophet of God, and an extremely important one at that. He was sent by Allah as the final prophet to the House of Israel, with very powerful miracles to prove his legitimacy beyond any doubt.

However, he is not considered the son of God. In fact, Muslims don’t ascribe any partners or sons to Allah. If a Muslim has any need or problem, he or she asks for help from God alone and directly and not through any intermediaries – this is the foundation of the Islamic faith.

The concept of trinity is completely foreign to Islam. It represents the fundamental difference between the two faiths. Allah says in Surah 4, verse 171:

{O People of the Book [Christians and Jews]! Commit no excesses in your religion: Nor say of Allah aught but the truth. Christ Jesus the son of Mary was [no more than] a messenger of Allah, and His Word, which He bestowed on Mary, and a spirit proceeding from Him: so believe in Allah and His messengers. Say not “Trinity”: desist: it will be better for you: for Allah is One Allah: Glory be to Him: [far exalted is He] above having a son. To Him belong all things in the heavens and on earth. And enough is Allah as a Disposer of affairs.}

Another point of difference between Islam and Christianity is in the concept of original sin. As Yusef Estes, an ordained Baptist minister and convert to Islam, explains:

“Muslims also believe that God is merciful and just to His creatures. So, they deny the concept of the ‘original sin’ [all children are born into the sins of their parents] and the ‘Sacrificial Lamb’ concept, which requires the blood of Jesus (peace be upon him) to atone for the sins of the sinners.”

In fact, Muslim believe that Jesus did not die on the cross, rather Allah saved His beloved prophet from such a fate and cast his likeness on one of the Roman guards who sought to arrest him. Thus, the guard was crucified in place of Jesus (peace be upon him), who was subsequently taken up by Allah until his second coming near the end of the world.

As mentioned above, Muslims believe in the original Gospel as it was revealed to Jesus (peace be upon him). However, over the past 2000 years, the various Christian translators and scholars have corrupted certain verses with additions, deletions, and alterations.

Whether these corruptions are few or many is unknown to anybody save Allah, as the original Gospel is no longer with us. Nevertheless, we known they exist, and we can’t tell the original verses from the corrupted.

On the other hand, the Quran, the final revealed text of Allah to Prophet Muhammad (may Allah bless him and give him peace), is unarguably in the same form as when it was reveled over 1400 years ago.

Even non-Muslim scholars of Islam admit that the Quran has not been altered from its original form. To this day, its purity stands as a miracle to mankind until the end of time; it is the criterion by which to judge the content of previous scriptures. 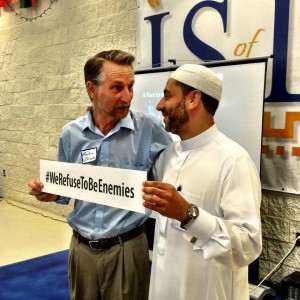 I have tried to touch upon the most salient points of departure between Islam and Christianity; however the issue is huge and requires an in-depth study. If you are interested, we recommend that you contact your local mosque – they will be glad to answer your questions and will be able to give you a personal perspective on the matter.

In general, Muslims don’t eat the meat of scavenger animals, pig meat being the most famous and readily available. Muslims could not eat rat meat, for instance, as it is a scavenger animal just like a pig and is considered unclean and not fit for eating. Fortunately, most people don’t eat rat meat, so this issue is rarely touched upon, but the same principle applies.

Thank you again and please keep in touch.