aaa
Q As-salamu Alaykum,  I am currently studying about world religions in school and I am intrigued by the similarities between Islam, Christianity and Judaism. I am obvious to the differences between these three religions as well. My question is: we claimed that the Bible and the Torah that the Jews and Christians are using now are no longer authentic.. is the real Injeel and Torah still available? Hidden somewhere by the authorities of these religions perhaps? It was stated somewhere in the Internet that two non-Muslims scientists were banned from giving public speeches since they held Islam and the Quran in high regard. The author of the website was condemning Islam and stating that despite holding Islam in high regard, these two scientists never actually converted to Islam. What do you have to say about this? Since Jews used to be "under" Prophet Musa (peace be upon him), why is it that their God is called by the name Yahweh? Am I right to say that their religion at that time was not known as Islam? In Islam, we believe in leaving things to fate (to Allah) So is it right to say that someone made a mistake because Allah wanted him to do such a thing? Hope to get an answer from you and I would appreciate if you can tell me more differences of the three religions because I fear I might get the wrong information from surfing the wrong websites. Shukran and may Allah bless you always.

Your question is very important. Understanding the beliefs of others is essential, not only for our own growth in knowledge, but also for speaking to others about Islam. We cannot really talk to Christians and Jews about Islam if we are unsure what they themselves believe, since the similarities and the differences between the three religions are very important.

Real da`wah (telling others about Islam) needs a lot of preparation. We need to know who we are talking to. Similarly, any dialogue between religions requires knowledge about the one we are talking to. Since all Muslims are called to be the best they can be, study is very important if we are to become the people that Allah wants us to be.

Up until the time of Muhammad (peace be upon him), different prophets had revealed part of Allah’s plan. This was given to different people and was meant for them and their time. The revelation to Moses, then, was for the Children of Israel of his day.

The revelation to Jesus was also to a people in their own time. The message to Prophet Muhammad (peace be upon him), as revealed in the ever-glorious Quran, was meant for all people in every age, and for all time.

Muslims take great pride in knowing that the Quran is totally unaltered since it was first revealed. The Quran that we read today is exactly the same as the Quran revealed to Muhammad (peace be upon him).

In proof of this, different copies of the Quran from different centuries and from different parts of the world, all show to be exactly the same. Nothing in them is different. This is most important, since Muslims believe the Quran to be the exact words of Almighty Allah as first revealed to Muhammad (peace be upon him).

It is not the belief of Muslims that the unaltered originals of these books exist somewhere in the world today. The exact revelation to Moses and Jesus (peace be upon them both) has been lost. What we have today, in the form of the Old Testament and the New Testament was created by men and has gone through significant alteration and translation over the centuries.

Let us take the Christian Gospels, for example, and in doing this we intend no slight on what Christians believe. There were many written versions of the Gospel. “Gospel” means “Good News”. A Gospel is not meant to be a biography of Jesus. If it was supposed to be biography, we would see that different Gospels say different things which often contradict each other. No, the Gospels say things about Jesus and who he was.

Of the many Gospels written, the Christian Church has chosen four for its scriptures. Even Biblical scholars would not suggest that the words attributed to Jesus in these Gospels are necessarily the words that Jesus spoke. In a sense, the Gospel writers put these words into Jesus’ mouth to highlight different parts of his teaching, for example about love or about peace.

I must repeat that in saying this, no criticism is implied of Christianity. No one is suggesting that the Gospel writers maliciously altered the words revealed to Jesus. On the contrary, out of an exaggerated love for him they attributed things to him which they believed to be true. 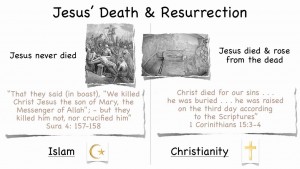 The result of these changes then is that the basis of what the Jews and the Christians believe has become distorted over time and is the creation of men, rather than the revelation of Almighty Allah. Adam, Abraham, Moses, David, Solomon and Jesus (peace be upon them all) were all prophets of Allah.

The message that was revealed to the Jews, though, has been altered through translation and re-printing and re-telling. The Jews came to believe that a Messiah would restore their Kingdom and that they, alone, are the Chosen People of God.

“Yahweh,” by the way, is simply the Hebrew word for God. “Allah” is the Arabic word, used by all Arabs, whether they are Christian or Muslim. Christians, out of an exaggerated love for Jesus, began to see him as more than human, God’s Son, who came to redeem the world from the effects of Adam’s sin.

It would take many pages to explain this properly, but this summary tries to explain why Christians, Muslims and Jews differ to this day, even though they were all a part of the original revelation.

The Jews believe that God’s revelation ended with the Old Testament and they now await the coming of a Messiah. Christians believe God’s revelation to have ended in the person of Jesus, who was that Messiah. Neither of these religions, then, accept that Islam adds anything to what God had wanted to say.

In terms of similarities, the three religions have much in common. Much of the moral code in all three is shared. All three believe in one God, although the Christian understanding of this is complicated by the idea of the Trinity.

For Muslims, then, Christians and Jews are people of the Book, since Allah spoke to both of them through his prophets and messengers. As Muslims we hold both Judaism and Christianity in high regard, since both grow out of the revelation of Almighty Allah.

However, as Muslims, we believe that Islam (an Arabic word coming from a root word which means both “submission” and “peace”) is the fullness of Allah’s message for mankind. Muslims believe that Islam has existed since the beginning of time and that it is the natural religion of mankind.

Islam is the world’s religion of peace, in which men and women find their total fulfillment and happiness in submitting to the will of Allah, who knows and controls all things.

Dr. Mohsen Haredy, a consultant to Ask About Islam team, would like to add the following concerning your last question:

Muslims believe that nothing in this universe occurs without Allah’s ultimate knowledge. Allah has given human beings a free will to choose to do good or bad deeds. Allah never compels us to do bad things. If someone chooses to practice evil, he should not blame fate for t 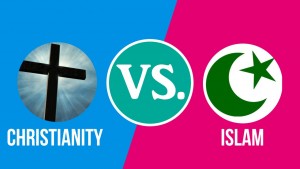 his, because Allah granted him the power to choose between good and bad.

We hope that this answer to your question has not confused you even more! It is a very complicated subject and would take many pages to explain in full, but we hope that it at least begins to answer what you ask.