aaa
Q One of your news stories mentioned that Russian city didn't allow a mosque to be built. Does this surprise your editors? Does Saudi Arabia allow churches to be built there? Most Muslim states won't even allow anyone to practice a different religion, let alone build a church or temple. Maybe when your religion can be more tolerant of other beliefs, Muslims will find the favor returned. I do know of one country, however, where you are free to worship whatever religion you want, free of gov't prosecution, it is written right in the Constitution---the United States!!! I am sure there must be some verse in the Holy Book Quran that says you should have your own house in order before you start criticizing others. Thank you for your time in reading this, and would like to hear your reply.

Your questions and statements on religious intolerance are based on assumptions most of which neither jibe with Islamic doctrine nor with Muslim behavior all through history.

As far as doctrine is concerned, we should proceed from the fact that religious pluralism normally becomes an issue only between monotheistic religions (like Judaism, Christianity and Islam).

To thee We sent the Scripture in truth, confirming the scripture that came before it, and guarding it in safety: so judge between them by what God hath revealed, and follow not their vain desires, diverging from the Truth that hath come to thee. To each among you have we prescribed a law and an open way. If God had so willed, He would have made you a single people, but (His plan is) to test you in what He hath given you: so strive as in a race in all virtues. The goal of you all is to God; it is He that will show you the truth of the matters in which ye dispute;

Similar messages are to be elsewhere in the Quran and in 10:99 Muhammad (peace be upon him) is even asked rhetorically: “Do you really think you can force people to believe ?”:

If it had been thy Lord’s will, they would all have believed,- all who are on earth! wilt thou then compel mankind, against their will, to believe!

This fantastic code of inter-religious tolerance predates the US Constitution by 1050 lunar years; it is backed up by the famous verse Surat al-Baqara forbidding forced conversions:

Let there be no compulsion in religion: Truth stands out clear from Error: whoever rejects evil and believes in God hath grasped the most trustworthy hand-hold, that never breaks. And God heareth and knoweth all things. 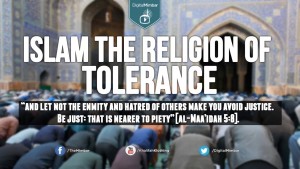 Indeed, the Qur’an leaves such matters to individual decision:

Consequently, Muhammad (peace be upon him) was told that he is not everybody’s “guardian” :

“Now have come to you, from your Lord, proofs (to open your eyes): if any will see, it will be for (the good of) his own soul; if any will be blind, it will be to his own (harm): I am not (here) to watch over your doings.”

It is Allah, and nobody else, who makes Muslims:

… God by His Grace Guided the believers to the Truth, concerning that wherein they differed. For God guides whom He will to a path that is straight.

In keeping with these fundamental rules, Islam never knew of missionary work as an institution. Muslims are expected to invite others in the nicest possible way to consider the values and truth of Islam, no more and no less:

Invite (all) to the Way of thy Lord with wisdom and beautiful preaching; and argue with them in ways that are best and most gracious: for thy Lord knoweth best, who have strayed from His Path, and who receive guidance.

There are Qur’anic verses suggesting the opposite conclusion, like

If anyone desires a religion other than Islam, never will it be accepted of him; and in the Hereafter He will be in the ranks of those who have lost (All spiritual good).

The Religion before God is Islam:…

However, in these cases, a correct reading takes into account that “Islam” here means submission to God ”.. not the historical religion called Islam.

Christian dogma, fatefully postulating that mankind is victim of a hereditary, “original sin”, until most recently followed what could be called a manifesto of religious intolerance: the doctrine of extra ecclesiam nulla salus (no salvation outside of the Church).

During the reformation, this aggressive, exclusivist doctrine was completed by the equally vicious doctrine of cuius regioeius religio (the monarch determines the religion of all). Even today, the Catholic Church (not to speak of the even more intolerant Greek Orthodox one) refuses to accept Muhammad (peace be upon him) as a messenger of God and the Quran as divine message. Alas, this extreme doctrinal divergence determined much of the history of Occidental-Muslim relations.

The Muslims on the whole, except occasionally under foreign attack, abided by the Quranic command of religious tolerance. Thus the Christian and Jewish communities flourished for 800 years in Muslim Andalusia (Spain). The same was true for the Ottoman empire. As a result, Christianity in Greece survived 500 years of Turkish rule.

Even today, in Istanbul there is a Greek Orthodox cathedral, the seat of the Greek Orthodox patriarch, many Catholic, Armenian, and Protestant churches as well as dozens of Jewish synagogues.

In Syria, the crosses on Christian church steeples are neon-lit at night, in Cairo, on the road to the airport from downtown, one sees more Coptic churches (for the 14 million Egyptian Copts) than mosques.

In ‘Amman (Jordan) the main mosque and the main cathedral face each other peacefully, in Morocco, Catholic bishops continue to exercise their office. In fact, to this day, Christians and Jews can be cabinet ministers in places like Egypt. ‘Iraq, Morocco, and Turkey.

Christian practice was of course entirely different. Hardly had the Catholics defeated the Muslims in Andalusia in 1492 when forced conversion set in. Those Muslims and Jews who refused were all exiled in a mass exodus of religious cleansing.

The same happened in Greece and Serbia, Not one functioning mosque survived the Reconquista in Spain, none in Greece, and only one in Belgrade (on Kalemegdan). Indeed, intra-Christian intolerance was as virulent, leading to the 30 Years War in Central Europe (1618-48). After Catholics and Protestants, Lutherans and Calvinists, had decimated each other, most countries in Europe remained mono-religious, What a contrast to the Muslims world !

As a result, the Europeans find it extremely difficult to adapt to the new, multi-religious landscape. This explains the Russian rejection, not only of mosques but also of Catholic churches!

The only place where Muslims do not welcome churches is indeed Saudi Arabia which houses the two most holy places for Muslims, al-Madinah and Makkah. 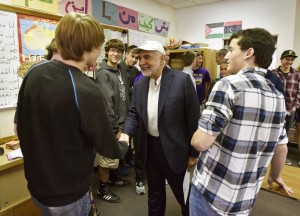 Is it not understandable, and legitimate, that Muslims claim one single place in this world where they can be among themselves (although only Makkah and al-Madinah are strictly off limits for non-Muslims)- just like men in a club off-limits for women and women in a club off-limits for men? That is why Muslims never complain about the fact that the Vatican State in and near-Rome would not accept a mosque or synagogue on its sacred territory either.

[See also How is Islamic law applied to non-Muslims?]