aaa
Q As-salamu Aleikum. I need help refuting an atheist argument. It goes like this: "Religion does more harm than good". How do we refute this argument? Thanks.

Salam Dear Usama,
Thank you for your question and for contacting Ask About Islam.
To refute this atheist’s argument, one needs to first clarify the position of a believer in God, which is the belief in an Afterlife, and the belief that God wants what is best for us in this world and in the Hereafter.
You could then explain that Muslims believe that Allah has revealed in the Noble Quran everything that is necessary for men and women to live good lives. He also reveals what is harmful to them and what should be avoided.
According to the theory of “live and let live,” the consumption of alcohol, for example, would be a free choice. In the Glorious Quran the consumption of alcohol is forbidden, because it is harmful to humankind.
The theory of “live and let live” is another way of saying that anything goes, that anything is permissible, no matter how horrid, as long as people keep it to themselves.
Allah, though, cares for all His creation and does not want anyone to go astray nor to cause themselves harm. He doesn’t, however, force anyone to follow His way. All human beings have a free choice.
Islam is perfectly clear, and has always been clear, that there should be no compulsion or coercion in religion. People must be allowed the choice to accept Allah’s will or to reject it. Those who reject it, though, must one day face the consequences when they are judged for how they behaved in this life.
It is very easy, then, to use slogans such as “live and let live” or “peace to all,” but life is a little bit more complicated than that. There can be no peace, for example, where there is injustice. Are we to ignore it when people live quietly on their own, but deny the rights of others?
Peace does not just mean the absence of war, but it means actively promoting fairness for all people. A man may live peacefully and quietly within the confines of his house, eating and drinking until he is full and harming no-one, but outside his gate people may be dying of starvation. Left to our own devices, then, we can be selfish and unjust. 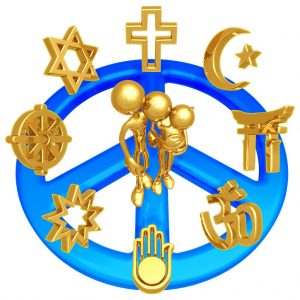 In summary, Muslims, believe that it is important for all people to be the best they can be. Different religions certainly help people to live good lives. Religions, by their very nature, are good. They do not promote evil.
For further readings on related topics, you may wish to consult the following link:
Why Do We Need Islam?
I hope this helps answer your question.
Salam and please keep in touch.
We use cookies on our website to give you the most relevant experience by remembering your preferences and repeat visits. By clicking “Accept”, you consent to the use of ALL the cookies.
Do not sell my personal information.
Cookie settingsACCEPT
Manage consent