aaa
Q How does Islam view the relation between God, nature and humanity?

Thank you for your interesting question and for contacting Ask About Islam.

This vision of the relationship between God, nature and humanity varies according to the Islamic school of thought which produced it. The two main schools which tackled this subject are the Sufi school, which is embraced by a large number of Muslims, and the Sunni school, which represents the majority of the Muslim world.

The Muslim Sufi vision of this relationship is directly influenced by Eastern philosophies, Hindu, Buddhist and Persian religions, and was also influenced by the doctrine of unity in Christianity.

Muslim Sufis adopt a pantheistic vision of God as they believe that we can know Allah (God) through creation. They believe in the identification of God and the elements of nature, and that God manifests Himself in those different elements.

They believe that God is in the entire world; the world is the body of God. God is to the world as the mind is to the body. Creation emerges out of God’s being either by incarnation or emanation.

Also, they believe in the doctrine of incarnation, which simply means that God manifests Himself in the person of His selected servants.

A historical Sufi, Ibn Mansour Al Hallaj, who lived in the middle ages in Baghdad, believed in incarnation and union with the Divine to the extent that he claimed Allah was incarnated in him, and that he and Allah had become one and the same, which is an obvious similitude to the Christian idea that God was incarnated in Jesus Christ (peace be upon him).

In contrast to this Sufi view, there is the belief of mainstream Sunni Islam, the one most Muslims adhere to, which is based on transcendental belief.

As for the mainstream Sunni school, it looks with a great deal of discomfort to this pantheistic vision. It condemns some of its pretexts, especially the one concerning the unity of God and Man. 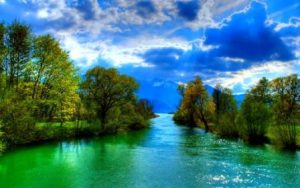 Scholars who belong to Sunni school have regarded adopting Pantheism, incarnation and all such beliefs to be acts of heresy and disbelief.

The Sunni ideology is directly related to the doctrine of monotheism, in which the relationship between God and the elements of nature, either humanity or even non-living beings, is that of a continuous state of complete submission and worshiping from the side of the created to God, the Creator:

{The seven heavens and the earth, and all beings therein, declare His glory: there is not a thing but celebrates His praise; and yet you understand not how they declare His glory! Verily He is Oft-Forbear, Most Forgiving} (Ad-Dukhan 44:17)

This relationship of servitude takes place without any merging or sharing of the divine nature by the Creator and his creation, but it takes place while God is completely outside of and beyond the world.

According to the Sunni ideology, God is God and man is man. Their relationship is very close. God addresses Prophet Muhammad (peace be upon him) in the Quran, which Muslims believe is the word of God, saying:

{When My servants ask you concerning Me, I am indeed close (to them): I listen to the prayer of every suppliant when he calls on Me} (Al-Baqarah 2/186)

But this closeness does not imply identification between the two. Moreover, orthodox Sunni belief tends to hold a transcendental vision of Godhead in the way it believes that Allah does not resemble his creation. Allah describes Himself in Quran saying:

This verse of the Quran encompasses that Allah is completely different from His creation in His attributes and actions.

Any created being, either man or any other element of nature, is liable to materialistic measures of existence, i.e. time and place which cannot be ascribed to Godhead. God exists but without a place. A fact that the Almighty stresses in the Quran when he says:

{Vision comprehends Him not, but He comprehends (all) vision. He is the Subtle, the Aware} (Al-An`am 6:103)

Imam Al-Tahawi, an authority on monotheistic creed and the author of an outstanding reference book about monotheism, said, “He is exalted beyond limits, ends, parts, limbs and instruments; and—unlike all created things — the six directions do not encompass Him.” (Abu Jafar Al-Tahawi, Al-Aqeedah Al-Tahawiyya, Section 7)

Although the relationship between God and man is that of servitude and submission to God’s will, it is not to be of subjugation or humiliation. On the contrary, it is of trust and respect. In the following long verse Allah the Almighty sheds light on the special and intimate relationship between Him and man amongst the other creations. He says:

{Behold, you Lord said to the angels: “I will create a vicegerent on earth.” They said: “Will You place therein one who will make mischief therein and shed blood?- while we do celebrate your praises and glorify your holy (name)?” He said: “I know what you know not.”

And He taught Adam the names of all things; then He placed them before the angels, and said: “Tell me 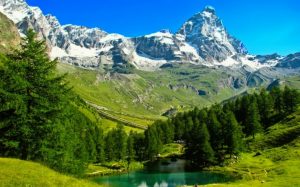 the names of these if you are right.”

They said: “Glory to you, of knowledge We have none, save what You Have taught us: In truth it is You Who are perfect in knowledge and wisdom.”

“O Adam! Tell them their names.” When he had told them, Allah said: “Did I not tell you that I know the secrets of heaven and earth, and I know what you reveal and what you conceal?”

And behold, We said to the angels: “Bow down to Adam” and they bowed down. Not so Iblis: he refused and was haughty: He was of those who reject faith.} (Al-Baqarah 2:30-34)

We learn from these verses that God created humans with the purpose of being God’s vicegerents and trustees on earth.

We also learn from these verses that Allah has honored humanity by giving it a superior position in the universe and by elevating it above all honored creatures including angles; and that He bestowed on it the blessing of knowledge, the word ‘names’ in the verse stands for all items of knowledge.

This knowledge enabled humans to be the only creatures that have free will to choose and be responsible for their acts.

In another verse Allah stresses this unique relationship between Him and humanity, He says:

{Behold! your Lord said to the angels: “I am about to create man, from sounding clay from mud molded into shape. When I have fashioned him (in due proportion) and breathed into him of My spirit, fall you down in obeisance unto him.} (Al-Hijr 15:28-29)

This verse stresses the fact that humanity deserved this status from the Creator as they were the only creation whom God breathed His own spirit into. Thus the relationship between God and humans becomes as close as that humans have the spirit of God inside them.

According to the Sunni conception of God and His relationship with nature, nature is not the manifestation of God but of His infinite wisdom, capability and empowerment.

God has created nature in this perfect form as signs of His existence which guides humanity to strengthen their belief in Him. Allah the Almighty said in a series of verses in the Quran: 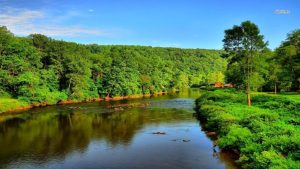 {We will show them Our Signs in the universe, and in their ownselves, until it becomes manifest to them that this {the Quran} is the truth. Is it not sufficient in regard to your Lord that He is a Witness over all things?} (Fussilat 41:53)

{And in the alternation of night and day, and the provision {rain} that Allah sends down from the sky, and revives therewith the earth after its death, and in the turning about of the winds, are signs for a people who understand. These are the signs of Allah, which We recite to you with truth. Then in which speech after Allah and His signs will they believe?} (Al-Jathiyah 45:5-6)

I hope this answer your question. Please keep in touch