aaa
Q Salaam alaykum! I have a question that's been confusing me for a few days. I just recently read the entire translation of the Quran for the first time, and I marked all the ayaat (verses) that I didn't understand or didn't agree with. I paid extra attention to the ayaat that had something to do with science, since Muslims tend to consider scientific miracles in the Quran to be the proof that it's from God.Basically, this is my question: How do you explain these ayaat?" And it is He who spread the earth and placed therein firmly set mountains and rivers; and from all of the fruits He made therein two mates; He causes the night to cover the day. Indeed in that are signs for a people who give thought." (13:3) "And the earth - We have spread it and cast therein firmly set mountains and caused to grow therein [something] of every well-balanced thing." (15:19)"And the earth We have spread out, and excellent is the preparer." (51:48) "And after that He spread the earth." (79:30) "And at the earth - how it is spread out?" (88:20) "And [by] the earth and He who spread it" (91:6). My first language is Bosnian, so I read the translation of the Quran in Bosnian, and it also says everywhere that somehow the Earth is spread out - as flat. This isn't something you can just ignore. Maybe it has to do with the wrong translations. I don't speak Arabic, but I can read it and I know some basic things. In all these ayaat, it seems like a different word is being used to describe the Earth in each of them. I would like to know the actual meaning of all of them, not just one. It also has nothing to do with how we perceive our planet (as flat), but how Allah created it (as FLAT). I really hope you answer me soon.

Short answer: Of course not. The Quran describes the earth as “egg-shaped”, and “spread out”, not flat. Blame this misunderstanding on incorrect translation from the original Arabic.

It is encouraging to see that our younger generation has not lost interest in understanding the truest meanings of the Quran.

May Allah reward you for your efforts, especially since Arabic is not your first language.

Islam Challenges Us to Expand Our Scientific Knowledge

As for the scientific accuracy of the Quran, Muslims do not shy away from this topic as do some who follow other faiths.

Islam is a comprehensive way of life that offers knowledge and guidance for all aspects of life, scientific topics included.

This is the reason that so many scientific advances were made by numerous Muslim scholars such as Ibn Sina (Avicenna), Ibn Rushd, and Al-Khawarizmi to name but a few, may Allah have mercy on their souls.

As a matter of fact, Allah challenges us to study the natural world through the lens of reason and common sense, very much a scientific process, and many of the verses you have quoted are excellent examples.

True Quran Only in Arabic, All Else is Interpretation

After briefly studying these verses in Arabic, we find that many different words are interpreted to mean “spread out” in English.

However, Arabic is a much more broad and subtle language, so each word can have multiple meanings.

This can often give us a much deeper understanding of the verses than a direct one-to-one translation.

That is why many scholars use the word “interpretation”, rather than “translation” when relaying meanings from Arabic.

The first two verses (ayaat) you quoted in Quran 13:3 and Quran 15:19 use the word “madd” meaning “to spread out, extend, provide, expand, stretch, help, prolong, furnish, lengthen, outstretch, and supply with” among other meanings.

The verse (ayah) from Quran 51:48 uses the word “farasha” meaning “to furnish”. Other ayaat use other words that have the meanings of “surfacing and flattening”.

Knowledge is not simply transferred directly from one to another; we must make it our own somehow. The beauty of the Quran is that it teaches us through discovery learning. 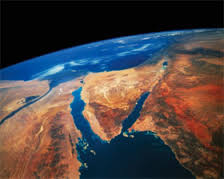 Finding the answer for ourselves helps us internalize knowledge and make sense of it in our own way.

This is the reality of learning for each and every one of us. Allah says what is translated as:

Say: “Go about the earth and see how He created for the first time, and then Allah will recreate life.” Surely Allah has power over everything. (Quran 29:20)

Here is a challenge to study and to find our own answers.

Learning would be boring if discovery was not part of the process; as the Greatest Teacher, Allah Knows this well.

Allah is even challenging us to learn how He originated creation.

We will likely find that there are many things beyond our comprehension, but we will also find spectacular and numerous new ways of understanding the world and universe we live in.

Also, from the human being’s perspective, the sheer size of the earth we inhabit gives us the impression that the entire surface is flat.

Through study, however, we have found that the earth is not a flat surface but a globe.

According to Dr. Zaghloul El-Naggar’s article about The Scientific Connotations in the Holy Quran, Allah has explicitly mentioned in the Quran that the earth is egg-shaped; this simply means that it is not a perfect sphere:

While other Quran translators translate the same verse as follows:

And the earth, moreover, hath He extended (to a wide expanse). (Abdullah Yusuf Ali)

And the earth He expanded it after that. (Muhammad Habib Shakir)

And after that He spread the earth. (Muhammad Pickthal & Muhsin Khan)

Also Dr. El-Naggar’s explains in his article: The Sun: Never Cease nor Disappear that in Quran 36:40, Allah mentions the rotation of the earth in a fixed orbit, which implies that the earth as a whole is not physically flat but the surface of the earth that we travel on appears to us to be flat.

I hope this has helped you to understand this issue more deeply. May Allah Guide us all to what pleases Him.

How Quran Is Ahead Of Science

Does the Quran Support Geocentrism or Heliocentrism?