Short Answer: The Quran is perfectly clear that the coming of Muhammad was foretold in previous scriptures. But we simply do not have those scriptures in their original form to know exactly what the scriptures said. Sometimes, all we can do in trying to understand, is to accept what Allah tells us in the Quran, His final revelation for mankind until the end of time.

It is admirable that you want to know more about Islam and about our Prophet Muhammad (peace be upon him).

Islam is Not for Unthinking People

At the end of time, we will be asked to give an account for how we have lived our lives. There will be no one on that day to intercede on our behalf.

Our actions will speak for themselves.

We should take information, also, from the scholars of Islam, but never follow them or anyone else blindly.

Your question is whether we are required as Muslims to understand the prophesies about Muhammad in the Bible.

As thinking people we must try to do this, reading and looking at sources, but it does not mean that we will always find an answer.

The Quran tells us:

And remember, Jesus, the son of Mary, said: O Children of Israel! I am the Messenger of Allah (sent) to you, confirming the Torah (which came) before me, and giving glad tidings of a messenger to come after me, whose name shall be Ahmad. But when it came to them with clear signs, they said, “This is evident sorcery.” (Quran 61:6)

What is important here is that Prophet Jesus (peace be upon him) says quite clearly that the Torah given to Prophet Moses mentions the coming of Jesus and the coming of a messenger after Jesus.

This is all that we are told.

Many Prophets, One Message

Let us now step back for a moment to understand something else, before we return directly to your question.

Muslims believe that Allah has spoken throughout history to His Creation, telling men and women how to live their lives.

Indeed We sent down Our messengers with the clear signs, and We sent down with them the book and the balance, so that people may uphold justice. (Quran 57:25)

The different prophets revealed something of Allah’s message to each generation. Each revelation was given to a Prophet to speak to his own people at a particular time in their history.

Islam teaches us that the Quran is the final revelation of Almighty Allah to mankind.

Since the Torah and the Gospel, the Psalms, and the scrolls given to Abraham and Moses were intended for a particular people at a particular time, they no longer exist in their original form.

Either through differences of meaning in translation or through deliberate alteration of the meaning, we no longer have the originals. So we read:

Some of the Jews pervert words from their meanings. (Quran 4:46)

The important point, which has bearing on your question, is that Allah did speak to former prophets, but we no longer have an accurate re 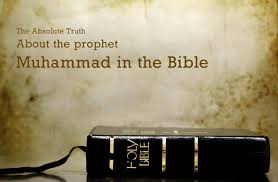 cord of what He said, except what is contained in the Quran.

Returning to your question, then, the Quran tells us that Prophet Muhammad’s coming was foretold in the Torah, but it doesn’t tell us what was said.

For us to go to books in the existing Old Testament of the Bible and say that this verse or that verse is a prophecy of the coming of Muhammad seems to me to be going beyond what we have been told.

We have been told of his coming, but not given specific references to where we are told.

In other words, the exact words of such prophesies may no longer exist today.

I do not believe that we can quote from the Bible and say that such and such a quotation is evidence. To do that would be to quote from a source which we believe to be corrupted over time.

It would destroy our argument that the book is corrupted if we quote from it.

In the Book of Deuteronomy, for example, which forms part of the Bible accepted by Jews and Christians, we read words attributed to Moses:

Instead, he will send you a prophet like me from among your own people, and you are to obey him. (Deuteronomy 18:15)

So the Lord said to me. “I will send them a prophet like you from among their own people. I will tell him what to say, and he will tell the people everything I command. He will speak in my name, and I will punish anyone who refuses to obey him.” (Deuteronomy 18:17-19)

It may well be that these or similar words were the ones addressed to Moses (peace be upon him), since they do fit well into explaining the Quranic verse about a future Messenger.

However, as I have said, it would be presumptuous for us to assume that these are indeed the words revealed, since we just do not know if this passage in the Torah is authentic or not.

Similarly, there are three passages in the New Testament Gospel of Saint John, in which Jesus is quoted as saying:

I will ask the Father, and he will give you another Helper, who will stay with you forever.  (John 14:16)

The Helper will come – the Spirit, who reveals the truth about God, and who comes from the Father.  (John 15:26)

But I am telling you the truth: it is better for you that I go away, because if I do not go away, the Helper will not come to you. But if I do go away, then I will send him to you.  (John 16:7)

Once again, it may be that these words were the words of Jesus (peace be upon him).

But we have no way of knowing if they were, since we believe that the Gospels which exist today are not the Gospels revealed to Jesus.

Many have spent long hours translating the word “Helper” from the passages we have quoted.

Many Muslim scholars say that the original Greek word, in which John wrote the Gospel, has been understood by Christians as Paracletos, whereas a similar Greek word Periclytos could have been meant instead, which means “Praised One”, which in Arabic can be translated as Ahmad or Muhammad.

However interesting that may be, as an exercise in linguistics, we just do not know if these were even the words of Jesus at all, since as Muslims we maintain that the Gospel no longer exists in its original form.

In answering your question, then, we can conclude that the Quran is perfectly clear that the coming of Muhammad was foretold in previous scriptures.

But we simply do not have those scriptures in their original form to know exactly what the scriptures said.

Sometimes, all we can do in trying to understand, is to accept what Allah tells us in the Quran, His final revelation for mankind until the end of time.

Muhammad: Are You That Awaited Prophet?

The Holy Spirit in Islam and Christianity

3 Proofs Muhammad was the Prophet Foretold in the Bible

Does Muhammad Fit the Prophecies Mentioned in the Bible?