aaa
Q I want to know why the friendly physical contact between friends of opposite sex is forbidden? I want phrases from Quran and Sunnah to be able to convince my friend (who is a guy), he would say that he has no sexual interest in his girl friends.

Short Answer: The mere interaction and contact between men and women is not prohibited in Islam. There are certain rulings pertaining to men-women relationship. As for friendship, Islam encourages people from different cultures to know each other as long as there is mutual respect for the peculiarities of each society and its culture. The interaction in itself is not prohibited as stated above. What is forbidden is the physical interaction. A man is not allowed to touch a woman who is not his mahram, i.e. a woman whom he can marry.

Thank you for contacting Ask About Islam and for your question.

Men and Women are on Equal Footing in Islam

Men are the guardians of women in terms of taking care of them, understanding them, consulting them, and leading their affairs. This does not mean any inferiority of women. By the same token, women are responsible for taking care of husbands’ house affairs and bringing up the children in cooperation with husbands.

As for friendship, Islam encourages people from different cultures to know each other as long as there is mutual respect for the peculiarities of each society and its culture.

The interaction in itself is not prohibited as stated above. What is forbidden is the physical interaction. A man is not allowed to touch a woman who is not his mahram, i.e. a woman whom he can marry.

To have a pure relationship in the society between men and women, women have to dress and speak properly. Men and women should avoid being in one place without a third party.

The Quran on Islamic Code of Interaction

The Qur’an details the Islamic code of interaction between men and women in the following two verses:

{[Prophet], tell believing men to lower their glances and guard their private parts: that is purer for them. God is well aware of everything they do. And tell believing women that they should lower their glances, guard their private parts, and not display their charms beyond what [it is acceptable] to reveal; they should let their headscarves fall to cover their necklines and not reveal their charms except to their husbands, their fathers, their husbands’ fathers, their sons, their husbands’ sons, their brothers, their brothers’ sons, their sisters’ sons, their womenfolk, their slaves, such men as attend them who have no sexual desire, or children who are not yet aware of women’s nakedness; they should not stamp their feet so as to draw attention to any hidden charms. Believers, all of you, turn to God so that you may prosper.} (Al-Nur 24:30-31)

Women are free to go out and interact with others provided that they abide by the rules explained in the above verses. The free mixing between men and women which provides the least possibility of temptation is forbidden.

This does not mean that men and women are not allowed to be in the same place. Historical records have it that men attended mosques and marketplaces with men. At mosques, women pray behind men’s rows. At schools and universities, girls attend classes with boys and there is no problem with this as long as they abide by the rules. In social gatherings, women have to be careful not to give any chance for any kind of interaction that might turn into a romantic relationship.

The following two verses narrate an interaction between men and women:

{When he arrived at Midian’s waters, he found a group of men watering [their flocks], and beside them two women keeping their flocks back, so he said, ‘What is the matter with you two?’ They said, ‘We cannot water [our flocks] until the shepherds take their sheep away: our father is a very old man.’ 24He watered their flocks for them, withdrew into the shade, and prayed, ‘My Lord, I am in dire need of whatever good thing You may send me.} (Al-Qasas 28:23-24) 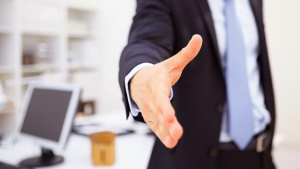 If we prevent men and women from being together at the same place, this would make people’s live very difficult. In open places and shops, there is no room for any kind of temptation. Therefore, men and women are to interact with each other within the above mentioned guidelines.

As for the issue of your friend, you have to explain to him that, in Islam there is no concept of having a girlfriend. Friendship has to be pure and restricted to the frame of work, study, and family. The sexual desire is something natural and it is an instinct in all human. What is unique about Islam is that it regulates this desire by introducing the institution of marriage which is the only legal means of fulfilling this desire.