aaa
Q Assalamu aleikum. When I was surfing through the internet, I found out that some websites and YouTube videos said that a lot of Muslims had visions and dreamed about Jesus (peace be upon him) then converted to Christianity. This has somehow affected me and I started to have doubts about Allah. I kept praying to Allah so he would show me the way and I am still waiting for it. I made a research about Christianity, It said that no one can see God or hear his voice in this world but some of the verses of the Bible also said about dreams and visions

Thank you for your question and for contacting us.

There are a few problems with this type of question, for example, can we believe everything we see in print or in videos? The obvious answer is No! Then, we should look and see if the portrayers of such stories are biased or could they have an agenda. If yes doubts begin to arise as to the veracity of their statements. Are statistics given? Are actual facts and figures, names and locations given which could be checked?

Having passed through all of that, we come to the Bible as quoted above: It said that, “No one can see God or hear his voice in this world.” Yet, don’t the Christians believe Jesus (peace be upon him) to be fully man and fully God?

How can this be if the Bible is the word of God and is considered to be true? I assume where the questioner mentions the Bible also says about dreams and visions that this is a reference to people dreaming or having visions, which they believe to be from God.

In Islam, we are told there are three conditions for seeking God.

The opening chapter of the Quran, the Fatiha gives us the first clue as to how to seek the Truth.

{In the name of Allah, Most Gracious, Most Merciful. Praise be to Allah the Cherisher and Sustainer of the Worlds, Most Gracious, Most Merciful, Master of the Day of Judgment; (only) You do we worship, and (only) You do we ask for help. Guide us to the straight path. The path of those on whom You have bestowed Your Grace, those whose portion is not wrath, and who go not astray.} (Quran, 1:1-7)

There is a divine hadith, a saying of Prophet Muhammad (peace be upon him) with Allah as the source, which states:

“When one recites the Fatiha, a dialogue takes place between the worshipper and the worshipped. Part of this dialogue is for Allah – He is given His position, part is for the worshipper – he makes his request, and part is shared.

When the worshipper says, ‘Only You we worship and only You we ask for help’, Allah responds My servant shall have whatever he asks for. The worshipper then says, ‘Guide us to the straight path…'” (Muslim)

Therefore, the worshipper is continuously requesting guidance in every prayer. Allah promises He will give that guidance. There is however, a condition, the worshipper has to be sincere in what he is saying.

Let us consider the beginning of the Second Chapter, Surah Baqara

{This is the Book; in it is guidance sure without doubt, to those who fear God (Muttaqin). Who believe in the Unseen; are steadfast in prayer, and spend out of what We have provided for them And who believe in the Revelation sent to you (Muhammad), and sent before your time, and (in their hearts) have the assurance of the Hereafter. They are on (true) guidance, from their Lord, and it is these who will prosper.} (Quran, 2:2-5)

So, there are conditions for the believer. The following fifteen verses talk about people who reject the truth or who say they believe but who don’t really mean it.

Is it reasonable to say to God – the Ultimate Reality that I will do this unless You do that? Would a person, realistically, try to impose conditions on God? Obviously the answer is No!

Allah tells us He will not change the state of a person until that person changes what is within his or her own heart. Then, if you take one step towards Allah, He will take ten steps towards you. If you walk towards Allah, He will run towards you…. This approach is definitely the opposite of what the question seems to be saying. You need to change yourself for Allah to guide you.

{Allah does not change a people´s condition unless they change what is in their hearts…} (Quran 13:11)

This verse tells us that Allah grants good to people when they strive and make an effort for it with a pure clean heart (good intentions), free of ailments like shirk, greed, falsehood, jealousy etc., which make the heart diseased. If we want to see a change then this verse applies.

Our attention is being drawn to the inner self, which is hidden and can easily be covered up to deceive others. Allah is drawing our attention to and making us aware of the fact that He has access to our inner selves and knows our intentions and thoughts, and He tells us that He wants purity at the level, of our thoughts and intentions, and He only accepts deeds of such high rank.

The ‘heart’, in Quranic vocabulary, is not just a piece of flesh or an organ in our body; it is the centre of all our feelings, emotions, motives, drives, aspirations, remembrance and attention. It is the heart which softens (Quran 39:23), or hardens (Quran 2:74). 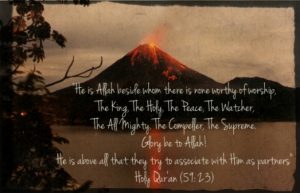 {The Day when neither wealth nor children shall profit, [and when] only he [will be saved] who comes before God with a sound heart [free of evil].} (Quran, 26:88-89)

The remainder of the answer will be posted tomorrow. I hope this partial answer got the idea through.