aaa
Q This question has been circling my mind, I am a Muslim but if anybody who believes in one god who rules all and is all mighty in his power but is not a Muslim and he also does good deeds like helping the poor, does he go to Heaven and do non-believers who do good deeds, get their reward in this world only?

The first thing to remember is that none of us has been appointed a judge over anyone else. It is not for you or I, then, to make any judgments as to who can possibly go to heaven or who can go to hell. Allah Alone knows the answer to this.

The second thing to note is that everything is not always as it may seem. Someone, for example, who may outwardly appear to be Muslim may secretly have long ago lost any belief in Islam and may be living a life quite contrary to what Islam teaches. Another person, however, who is not known to be Muslim, might have secretly accepted Islam.

Islam teaches us to respect what others believe. It is their right to do so and there is no compulsion in religion in Islam. It is not allowed to force others to be Muslim.

If a person truly lives according to these teachings he or she might expect to be on course for a Merciful Judgment at the end of this life. But none of us can take heaven for granted. It would be a sin and very foolish of us to do so.

As for those good people who are not Muslim but who have lived good lives and have acted always according to their consciences, Allah will decide on their fate.

It will not be that they were Christian or Jew that takes them to heaven, but that Allah accepted the goodness of their lives and that on the point of death He may have opened their eyes more fully to His Divine Will.

After all, as a person is uttering his last words or gasping his final breath, none of us know what is going through his mind. 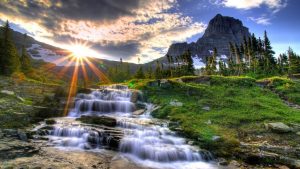 Islam and Christianity, for example, do contain within them much that is true, but Islam perfects our faith.

Christians and Jews, then, who live good and honest lives and worship God as they understand him, and who have not come into contact with Islam and have not rejected it, will surely be judged mercifully by the All-Merciful. It will not be because they were Christians or Jews, though, that Allah may choose to take them to Himself.


I hope this helps answer your question.