aaa
Q Thank you for taking time for my question. I think the hijab is a beautiful tradition. I do not understand the full face veil. Can you please explain this to me. Also, why are husbands allowed to cane their wives...is this not a human rights issue? I can understand many things about Islam, but this is hard for me.

Thank you for your questions and trust in Ask About Islam.

Actually, you brought up more than one important issue that needs to be addressed. In our days, there are endless misinterpretations of important Islamic practices and rulings related to women. So, here you are, giving me the chance to explain the realities, through answering your precious questions.

Before I go into details, I will simply state a clear and blunt Islamic fact that relates to the status of women in Islam. Please note that usually a questioner comes to ask about the Islamic stand from women, from his own perspective of what is right and what is wrong, affected by whatever paradigm he believes to be the best.

Globalization has succeeded, somehow, to draw a paradigm, through the media and other channels, that this or that standard or model of dealing with women is what is “right”. While, on the other hand, the values of tolerance and acceptance teaches us otherwise.

So, in order to understand the Islamic stand of the points you mentioned, we need to realize that Islam is a whole and complete paradigm.

It is a different, but equal paradigm to any other paradigm, where it offers respect and solution to each issue it addresses. And, in the eyes of its followers, they consider it the best paradigm ever that provides every human soul with freedom, inner peace and self-respect. And that includes women.

In fact, according to its followers, Islam is the one paradigm that has really acknowledged women’s complete human rights, self-dignity, the value of the female, individuality and personality respect and motherhood.

These values were acknowledged 1400 years ago by the Islamic doctrine, before the U.N. ever existed, or any of its documents in relation to women’s rights were discussed.

So, let’s look at the value of freedom and relate it to the concept of dress code, according to different paradigms, putting in mind the values mentioned above: acceptance and tolerance of different perspectives.

For example, according to the Western paradigm, which is kind of dominant now through the global paradigm, a free woman (in relation to dress-code) is the woman you see in tight blue jeans, shorts, mini-skirts, casual dresses, or even bikinis.

The less she puts on to cover on her body, the more she is free to move around, express her freedom, enjoy her flexibility and acknowledge her right to enjoy nature and feminine factual without being abused.

You will find endless programs and articles discussing how hijabi women are curbed and denied the right to develop and progress; as if a woman like me sits down to write an article like this using the fibers of her hair, not the intellects of her mind!

On the other hand, the Islamic paradigm relates the Islamic dress-code, known to many today as “hijab”, from a completely different perspective. Actually, hijab is the ritual of worship that guarantees for Muslim women complete freedom, equality, humbleness and acknowledgment of identity as a full human being.

A woman who lives all her life seeing herself being a body is much less aware of her abilities as a human being, than the one who sees herself as a human being. Yet, Islam never denies women their rights to enjoy their femininity, which is a natural instinct enjoyed by any woman in the world.

What Islam did is that it limited the environment where a woman would focus on her body identity. This limitation is in itself a right of choice given to the woman.

A Muslim woman chooses her husband and family, and this is where she enjoys herself as a female. Please note that the value of the female is not only related in Islam to the concept of gender and physical nature, but it is also related to the spiritual and social value.

Qualities of the female, related to a great extent to motherhood, love, tenderness and care are highly regarded in the Islamic paradigm.

In Islam, a woman is somehow secular and spiritual at the same time. She gets out of her personal cell, which is her chosen family, dressed like a nun, but acting like a secular woman. She is free from being dealt with as a mere body.

She has the right to be a person, an individual and a citizen to the full. She can choose to be a writer, a teacher, a doctor, a photographer or whatever. Why would she need her physical identity to become any of these? Then she goes back into her personal “kingdom”, where she chooses to expose and to become all herself; the person and the female.

Speaking about hijab can take me forever my dear Stephanie. There are endless points that I can explain and discuss. But, due to the shortage of space here, I just briefed you the main core point. In addition to what I have mentioned, please note that hijab spreads beautiful values between Muslim women, like humbleness and equality.

When Muslim women gather, all dressed in hair cover, long sleeves and wide gowns, the barrier of beauty differences dissolve. We start to look alike to a certain extent. We all look “Muslim”! No one of us is better than the other.

From the point of view of a Muslim woman like me, who chose to dress according to the Islamic code of dress, long years ago, everything that is ever said about hijab in the media is tragically funny!

These people know nothing whatsoever about what they are talking about! Endless stories are spread through the media about women being abused in the Islamic world and about forced to wear hijab.

The point here is that women are abused physically and emotionally all around the world. Yet, at least, there are some (so many) Muslim women who are happy to practice and they enjoy it. 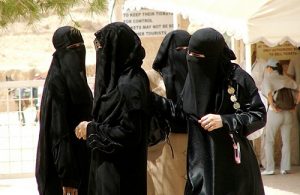 Personally, I know endless numbers of women who wore hijab against their families’ will. Why don’t we ever hear about some of these stories through media channels that redundantly have expressed their interest in Islam and in the welfare of Muslims?

As for the face covering or the hair covering or whatever details of how to wear the Islamic dress code, please note the coming point. Scholars of Islam have based their opinions, even if they differ sometimes, on their analysis of the Quran and the sunnah (traditions) of Prophet Muhammad, peace be upon him.

All sources and scholars’ opinion agree that a Muslim woman is to cover her whole body and hair; all except face and palms. This is what is known today as hijab. As for covering the rest, scholars have differed in their opinion.

Some see that niqab (the face cover) is burdening and curbing to the woman and society today. Others see that it is ordained and has to be used. A third party see that it is a matter of personal choice.

So, if Muslims themselves did not reach an agreement concerning niqab, then why are you bothering your head with it? In case you are a non-Muslim, then you need to understand that this is a marginal point that you might not face really till the end of your life.

Personally, I go with the opinion that face-coverage is not ordained. I don’t wear niqab and I don’t intend (up till now) to wear it. Yet, a niqabi woman has the right to be respected for her choice.

Why on earth is a bikini woman respected for her choice and left alone with this choice, while a niqabi woman is automatically “judged” as being pushed into what she’s doing and wearing? It never crosses the mind of “whoever is playing judge” that maybe these women do enjoy this choice and that maybe it is really their choice?!

I hope this helps answer your initial question. The second part is published here.