aaa
Q Someone wrote about Jesus and I wanted to give my opinion in a way that makes him think if what he believes is right or wrong and I want it to be a way to tell him about Islam. I'll write what he wrote and my comment on it and I need your help in evaluating what I wrote. Here is what he wrote: So....I used to think it was my duty to sin...sounds crazy, right? But seriously I mean Jesus died for our sins, right? Not just died. He suffered & was crucified. That's a terrible way to go, and far be it from me to make that kind of death a pointless exercise. So sin I did (and do) thinking (somewhere deep in the back of my conscience) that I was actually doing my Christian duty (baptized, raised & confirmed roman catholic no less)...racking up sins on my Jesus credit card for which Christ already paid. Then I meditated on it one day & realized that each of my sins represented a crack of the centurion's whip or a thorn being pressed into his temples...or a nail being driven into his hands or feet (for the big sins)....and my whole perspective changed. My comment: I was wondering, why should Jesus (peace be upon him) suffer for the people who believed on him? He had a message from God and those who believed in him and in his message and whatever sins they did, they would take the responsibility for it, why should Jesus do? Is this the price of believing in his message from God? Also, God created us and knows that we will make sins, sometimes we commit sins on purpose and sometimes because we just couldn't resist the temptation of it, but God is the forgiving. If we realized that we did these sins and stopped doing them, God will forgive us if we really declared the penitence. But, as humans, there is a big possibility that we are going to do these sins again and again even when we already know that it's wrong, but we always ask for forgiveness from God. If we hurt others and treated them badly in that situation, we should ask for forgiveness from them and from God. But for those who do not care, they are going to take their punishment either in this life or in the day of judgment. But Jesus should never take the responsibility for his believers' sins. Everyone should take the responsibility of their actions. I love Jesus (peace be upon him) and I believe in him as a messenger from God (Allah, the One and Only Creator of every soul that exists. If you read what he wrote, what would you say? Thank you for your time.

Thank you for your question and your comments, which are inspired by your desire to speak the truth about Islam.

It seems that the one you quote has a rather unusual and complicated understanding about the Christian teaching of Jesus dying on the cross for sins.

I have certainly never come across the idea before that people are actually obliged to sin in order to show their gratefulness for the forgiveness which Jesus has brought them.

This is certainly not within the scope of Roman Catholic belief, although it comes nearer to a more Evangelical belief, whereby there is nothing more that anyone can do or say because Jesus has already done it all.

Such a belief would lead some to say that even doing good deeds was not necessary, since Jesus’ death on the cross had decided once and for all who had been saved in baptism. The idea of sinning on purpose, though, goes even beyond that belief and I know of no Christian Church that would subscribe to such an idea.

It is a central tenet of Christian belief that Jesus died on the Cross to atone for the sins of mankind. Let us try and understand what this means.

According to such a belief, God created Adam and Eve, the first man and woman, and He placed them in the Garden of Eden, giving them everything they needed to enjoy perfect bliss. They could do anything they wanted, but were forbidden just one thing: they could not eat the fruit of the tree of the knowledge of Good and Evil.

Satan tempts Eve into eating of the fruit, and she in turn persuades Adam to do the same. As a result, the two are punished by being expelled from the Garden of Eden.

And so the Christian version of the story ends. Adam and Eve are condemned for their sin and their descendants will share forever their sin, since there is nothing they can do to make up for it.

In the Muslim account of this episode, to be found in the Quran, on the other hand, the couple is indeed found guilty, but they return to Allah and are forgiven. There is no inherited guilt for all eternity. Future generations come into the world sinless. In the Christian version, however, all human beings are born with Original Sin.

The Concept of Original Sin

This Original Sin is inherited because there is nothing anyone can do to make up for what Adam and Eve did. It cannot be forgiven, because this sin was committed against God, and only God Himself could forgive such a sin. Only someone equal to God could atone (or make up) for the sin.

Throughout the centuries, then, men and women tried to make up for the debt they owed to God.

At first, they offered sacrifices to th 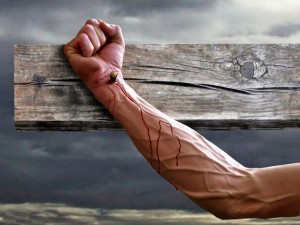 eir gods to please them and to stop them from harming them.

They later began to believe in only one God, but still wanted to offer sacrifice to Him to make up for the debt they owed. The problem was that they could not find anything to offer which was equal to the debt they were trying to make up for. Offering a sheep was no good, since it was God who made the sheep.

The way Saint John’s Gospel describes the crucifixion of Jesus is as though Jesus mounts the cross willingly. He is not so much caught by the Jewish authorities as he is seen to be sacrificing himself. If Jesus is God’s Son, then, his sacrifice is equal to the one who was offended.

Christians believe that Jesus’ death on the cross meant that the Original Sin could be forgiven if people became Christian and were baptized. The act of baptism would wash away the Original Sin.

According to mainstream Christian belief, though, Jesus’ death on the cross did not automatically forgive every one of the sins people would commit in the future, although it did make it possible for them to be forgiven if the sinner was truly sorry.

Your friend is mistaken, then, in thinking that mainstream Christian belief includes the idea that all of the sins he is ever going to commit will automatically be forgiven.

It is certainly outside the scope of Roman Catholic belief that he is obliged to sin in order to be grateful.

The second part of your friend’s argument is flawed also. Lurid films have made the crucifixion of Jesus exceptionally cruel and brutal. Artists through the ages have shown very graphically the blood and the cruelty. Orators have appealed to the guilt of sinners by suggesting that they were responsible for Jesus’ death.

For him to say that “every one of my sins represented a crack of the centurion’s whip or a thorn being pressed into (Jesus’) temples” is certainly very dramatic language.

Christian belief, though, teaches that Jesus died for Original Sin, which had already been committed. He was making up for something wrong that had been done, not anticipating future wrongs that might be done by individuals. These future wrongs would be forgiven in so much as the sinner was sorry.

Even though all of this doctrine is very complicated, there is still another aspect which we could mention. 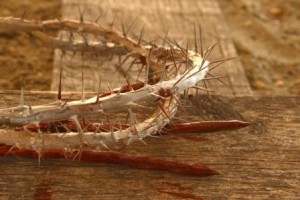 There are certain Evangelical and Protestant groups which make it seem as though Jesus’ death revolves around individuals: What Jesus did for me is what counts. That he is my personal savior is what is important.

Islam, on the other hand, puts it the other way around. It is God (Allah) Who is important. Humans are His creatures and all they do should revolve around His will.

Muslims submit to the will of Allah, and therein find peace and fulfillment. It is not the individual who is important, but Allah alone.

On Judgment Day, each one will have to give an account for his actions, taking personal responsibility for what he has done.

Almighty Allah, who is both Merciful And Compassionate, will in sha’ Allah forgive the wrong we have done.

I hope that this rather technical answer helps with your question. Please keep in touch.