aaa
Q I am 16 years old , and I am really confused about wearing face veil (Niqab). I have searched a lot about it and some scholars say it is compulsory while others say it is not; but what I feel is that I should do it. So I started wearing Niqab only for the places I feel its compulsory like going to the market or going for a walk but yet I wear Hijab permanently when in public. However, my aunt says that it's a drama that you wear it whenever you feel like it. Non-mahrams are everywhere so if you are wearing Niqab, you should wear it permanently and I don't want to wear it permanently, so If I am wearing a face veil only where I feel it is needed. So is it wrong and not counted as a good deed? because I am not wearing it in weddings and parties for example since I am among family and friends?

May Allah reward you for being keen to follow His commandments. It is wonderful to know that someone at your age is on the Right Path masha’Allah.

You are doing the right thing; following the Sunnah of Prophet Muhammad (peace be upon him) to the letter since the wives of the Prophet (may Allah be pleased with them) used to do exactly what you did by covering their faces when they were surrounded by strangers, therefore not a permanent face cover. You are collecting good deeds insha’Allah as long as the intention is correct, which is to please Allah and not to please people.

Permanent Niqab or face veil is not an Islamic requirement; it is a personal choice since Niqab is forbidden during Ihram according to most contemporary scholars based on the following fatwa:

“A woman who is in the state of Ihram (during Hajj or Umra) may not wear a niqab or gloves.” (Al-Bukhari)

However, she is allowed to temporary cover her face whenever non-Mahram men pass by her according to Aisha’s narration:

“Whenever rides pass by us while in Ihram with the Prophet (peace be upon him), as they get closer we covered our faces and when they pass us we removed it” (Abu Dawud)

If a woman covers her face with a burqu (mask) or niqab, permanent face cover, she has broken one of the rules of Ihram and must pay a fidyah (redemption) according to the following verse in the Quran which is translated as:

{…then you should make redemption by fasting, or alms-giving, or ritual sacrifice…} (Al-Baqara, 2:196)

She will not collect any sin if she makes redemption. However, many scholars are of the opinion that a fidyah is not required. 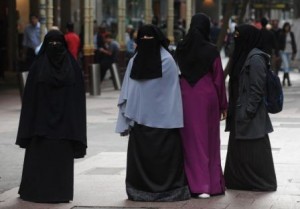 Most contemporary scholars view that hijab fulfills the requirements for Muslim woman’s dress when in public and niqab is a step beyond that. The following paragraphs explain this view.

The permissibility of exposing the face and hands is based on the Quranic verse:

{And say to the believing women that they cast down their looks and guard their private parts and do not display their ornaments except what appears thereof} (An-Nur 24: 31)

“Except what appears thereof” means the face and the hands as confirmed by the Prophet’s hadith (peace be upon him); he (peace and blessings be upon him) said to Asma’, daughter of Abu Bakr (may Allah be pleased with them):

“O Asma’! Once a girl reaches puberty, nothing of her body may be seen (by non-mahrams) except this and these, (he pointed to his face and hands while saying so).” (Abu Dawud, Al-Albani Classified it as Hasan)

Imam Abu Hanifa was of the opinion that the feet up to the ankles can also be exposed since according to him hands are more attractive than feet.

On the other hand, As-Salmani, one of the successors is of the opinion that a woman should cover her face with her Jilbab by drawing it over her face leaving her left eye to see from, and according to Aisha’s narration, she did so when men closely passed by her; therefore not a permanent face cover or niqab.  So the early generation of Muslim women covered their faces when strange men passed by them and uncovered it otherwise.

Obviously, one issue to take into consideration is that there were much less people living in their society at that time and it would be impractical to cover the face and uncovering.

On the other hand, if a woman wears the hijab according to the teachings of Islam, she will not go astray.  What I mean, if she covers her head properly without showing any hair and draws her head cover over her bosom; covering the chest area and her cloth cover all her body loosely, showing modesty then she will surely not go astray.

Islam has flexibility in many issues and whether a woman likes to wear the hijab or theniqab, it is her personal choice; both are acceptable but according to the opinion of many contemporary scholars, niqab is not required.

However, the opinion of some Muslim scholars, is that niqab is required; meaning that wearing hijab only is a sin. As Muslims, we must respect the opinion of all scholars whether we follow their opinion or not. 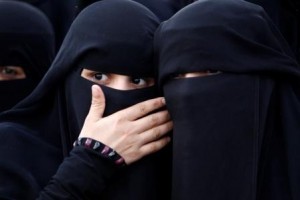 I do not recommend the niqab for women who live in the west since they will attract unnecessary attention and people are less likely to easily communicate with them.

However, I leave it up to the ladies to choose what is good for them; Islam is the most flexible religion, it is only some people who sometimes make it appear rigid and unfriendly. So even a woman who wears a niqab may demonstrate the beauty of Islam with her good manners.

Finally, continue doing what you are currently doing. You are not collection bad deeds insha’Allah; on the contrary you are well deserving of good rewards for closely following the Prophet’s Sunnah, may peace be upon him.

Muslim Woman: To Veil or to Unveil?

Aren’t Women in Niqab Too Oppressed?